Bob Biswas (Abhishek Bachchan) is lost to the world. He says he doesn’t know who he is, what he did, why he was in a coma for 8 years 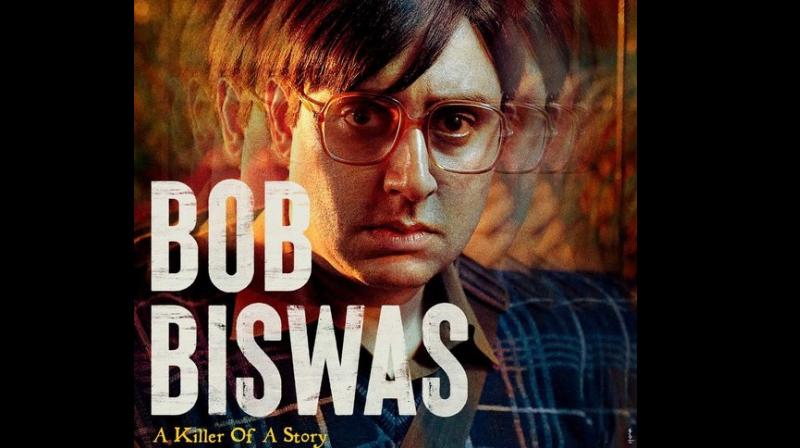 Bob Biswas’ plot is pivoted on “blue”, a drug that college-going youngsters in Kolkata are getting addicted to, and a man who may or may not be lying. (Twitter Photo)

I wasn’t expecting to like Bob Biswas the film. In fact, I was all ready to dislike Abhishek Bachchan for playing a character that, in all fairness, belonged to a Bengali actor.

Saswata Chatterjee had earned the dibs on any film on Bob Biswas because he had, along with writer-director Sujoy Ghosh, created that stand-out character in the 2012 film, Kahaani, with his own special, measured creepiness and an obsequious "nomoshkaar". It was his unique psychopathic mix of congenial commonness and salacious glee at killing that has stayed with us for over a decade and made Bob Biswas the iconic character that it is.

Abhishek Bachchan playing the title character in Diya Annapurna Ghosh's Bob Biswas felt so typical of Bollywood and its privileged star kids who will simply walk in and claim something that isn’t theirs, and then make a hash of it.

And yet, I enjoyed the film because of Abhishek Bachchan. He surrenders to the character with humility, without any starry airs or hamming. He claims the character as his, but with a hat-tip to Saswata’s Bob.

The film has a humble beginning in a Kolkata hospital.

Bob Biswas (Abhishek Bachchan) is lost to the world. He says he doesn’t know who he is, what he did, why he was in a coma for 8 years.

There's a silly back story about an accident and a dead best friend that is a rather sterile link to the original character.

As Bob checks out of the hospital with wife Mary Biswas (Chitrangada Singh) and son in tow, the film stumbles for a while. And like us, two cops who are watching him, laugh as they debate whether Bob is feigning it or if the contract killer has, in fact, lost his ball bearings.

Bob Biswas’ plot is pivoted on “blue”, a drug that college-going youngsters in Kolkata are getting addicted to, and a man who may or may not be lying. This is boring and trite and many of the film’s situations and characters that fill this story are dull, predictable. It's as if we've been here before, we've seen this guy, met that burly bully.

And yet, even with this potholed screenplay, as the film progresses, it begins to find its balance and every now and then it has a rhythm. So much so that Bob Biswas has the audacity to keep us waiting, almost enjoying our impatience as it delays gratification. And when the moment comes, it’s sudden, cool and worth the wait.

Written by Sujoy Ghosh and Raj Vasant, Bob Biswas sparkles and smiles when it’s preparing for a kill, and for that it always makes a pit stop at a chemist shop.

That’s one of the two things that anchor Bob Biswas — Paran Bandopadhyay the chemist with his amiable personality and soothing Bengali, and the other is gorgeous Chitrangada. In her lovely cotton sarees and frilly nighties, she roots the character of Bob by providing hearth and home.

But it's from Bob’s flashbacks to his past and his actions and reactions in the present that we get a glimpse of his motivation and a dark moral core.

Kahaani, directed by Sujoy Ghosh, had a sharp, original script and brilliant direction. Bob Biswas’ writing and direction are a mix of the tedious with some exciting bits.

The film has two scenes, one of which involves a lift, that are quite fabulous. But it also has a very obvious demonetisation related boo-boo that should have been fixed.

The film draws its power from its main character and the actor who plays him.

I have always liked Abhishek Bachchan. There's a quiet decency to him and an endearing comfort with who is and will always be in this universe: Small B. It’s a massive privilege that comes loaded with the burden of high expectations.

Wherever his shadow falls, a bigger one encases it.

Yet, Abhishek has proven his calibre again and again, in comedy, thrillers, in a courtroom drama, as a student leader, in his big daddy's presence, as Bunty to Rani Mukerji’s Babli.

It's a fact that his memorable roles are embedded in a patchy road along with several annoying duds, including Mani Ratnam's Raavan. But for every annoying Big Bull and Housefull, he has a Dostana, Ludo, Manarziyaan, Bol Bachchan. It’s his chemistry with Mukerji that Bunty aur Babli has a sequel 16 years later. And from that bizarre and loud Happy New Year the only scene I remember is of him folding his kachchas to create a ladder to escape.

Yet, we don't give Abhishek Bachchan the love he deserves, and box-office driven Bollywood doesn’t either. Bob Biswas fixes that, and Abhishek reciprocates that love.

Abhishek plays a character here that's split between who he is and who he wants to be. He toggles seamlessly between overt civility and a covert instinct to kill with empathy. He puts Bob before Bachchan and never steps out of character to do heropanti.

There's a breezy lightness to him and by the end you warm up to seeing Abhishek again, as Bob Biswas, with a gun, a sling bag and a paunch.