Director Robbie Grewal, who made something called Aloo Chaat (2009) and Samay: When Time Strikes (2003), is special too. 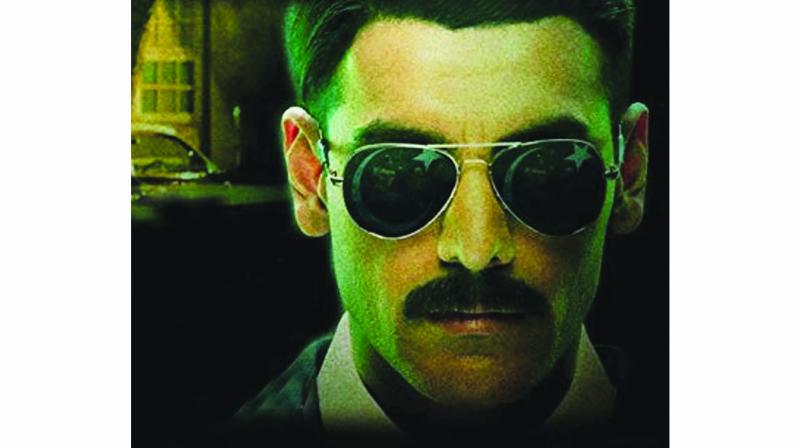 The film, pretty much like my detailed synopsis, devotes itself to the minutiae of the daily life of the world’s saddest spy in the dullest way possible.
Rating:

It takes very special kinds of powers and some frozen facial muscles to walk through the entirety of a film with just one expression — morose.

John Abraham has that ability and uniqueness, and he flaunts it to the hilt in Romeo Akbar Walter, or RAW, which is less a film and more a slow, dead crawl to the end credits.

Do not underestimate the power of RAW to sap you of all interest in life. It made me walk past a new chole-bhature stall outside the cinema hall without blinking, or a drop of saliva forming.

Director Robbie Grewal, who made something called Aloo Chaat (2009) and Samay: When Time Strikes (2003), is special too.

Never has a film been made on spies and spying that has had to drag its feet throughout, that too while India is in pursuit of thwarting Pakistan’s evil designs on what was, in 1971, East Pakistan.

RAW opens in Karachi, specifically in the ISI’s detention centre, where Akbar (John Abraham) is being relieved of his nails, one by one, by one rather sharp and natty Colonel Khan (Sikander Kher).

The back story of how and why Akbar got here is then shared with us, in all its banal, mundane detail.

There sat, in Delhi’s RAW headquarters, its head, Shrikant Rai (Jackie Shroff). He spotted Romeo, a bank employee, who was so adept at shape shifting and pretending to be another, that Rai decided to put him through a test at the Indian National Bank where he worked and nurtured soft-soft feelings for a colleague, played with a permanent pout by Mouli Roy.

Romeo passes the test with flying colours, is summoned and, told, “Beta, desh seva is the best” and asked to join the secret service specifically for Mission Thwart. India being on the verge of a war with Pakistan, as we have been backing Mukti Bahini, the Independence-seeking collective of military and civilians, we need to know what Pakistan is planning. And Romeo must feed the eager Indian intelligence network and sarkar to help create the liberated state of Bangladesh.

And so Romeo Ali is trained and sent off to embed himself in the organisation run by Isaq Afridi (Anil George), Pakistan’s main arms supplier and a man very close to the Army chief.

As Romeo goes to work in a hotel in Pakistan-occupied Kashmir, posing as Akbar Malik, he uses his melancholic guile to ingratiate himself to Isaq. This despite the fact that he misses his mommy dear (Alka Amin) like hell.

Meanwhile, some rather boring politics is being played in Delhi. And there is some equally boring powerplay in Pakistan between two groups in the Army.

Pakistan it seems is infested by double agents, and there’s just one mole they have managed to place in India. But some in the ISI are rather sharp, like Col. Khan, and he starts taking an interest in Akbar.

Soon, the screen is repeatedly reminding us of the number of hours left for Badlipur bombing. And as the seconds needle tick-tocks in your head, on screen the all-important people in Pakistan and India are playing pin-the-map and drawing circles with pencils around this area and that.

A rather long-winded chase ensues during which the very special Mr Abraham manages to keep that same worried-sad expression.

It’s bigger offence is that it is really, really dull. And boring. And slow. It also has some very silly, dumb things for a spy film. For example, a double agent under ISI surveillance is making out with an employee of the Indian high commission in the open before taking it to the bedroom.

The film, pretty much like my detailed synopsis, devotes itself to the minutiae of the daily life of the world’s saddest spy in the dullest way possible.

So much so that you can actually finish your daily jog around the cinema hall, with some step aerobics thrown in, keeping the film simply on audio. When you return with your cup of coffee, not much progress would have been made, either by Mr Abraham or India. Only Sikander Kher will catch your attention and you’ll wonder, like me, this boy is so good. Why don’t we see more of him? Why? Why?

Romeo Akbar Walter’s story is decent, and very similar to the much sharper, well-made and acted Raazi. But here a thriller has been given art house treatment when it really needed some tension, kinetic action and suspense.

Clearly, many thoughts dwell in John Abraham’s pretty head. But somehow his face and eyes have the ability to appear absolutely blank, as if not a single fleeting idea or thought has ever ventured anywhere near him.

John Abraham of the famously pert butt encase in the tightest of yellow lycra chaddies allows just a fleeing smile on perhaps two or three occasions and one half-smile to tell us, oh-ho, I’m so cool, see, double crossing these Pakistani dudes. Then he relapses into melancholic worry.

John Abraham usually does action well. Not here. Here he screams nicely, once. Bus, before sinking into that same morose expression.

RAW here is an acronym for both, the organisation his character serves, the various avatars he assumes, and it’s a play on Amar Akbar Anthony (1977), Manmohan Desai’s brilliant ode to India’s diversity and secular heritage. How smart! Sadly, all of RAW’s smartness begins and ends with its title.