Brash, bold and chock full of dark humour, ‘Operation Fortune’ is a fun watch for anyone who loves spy movies or action cinema 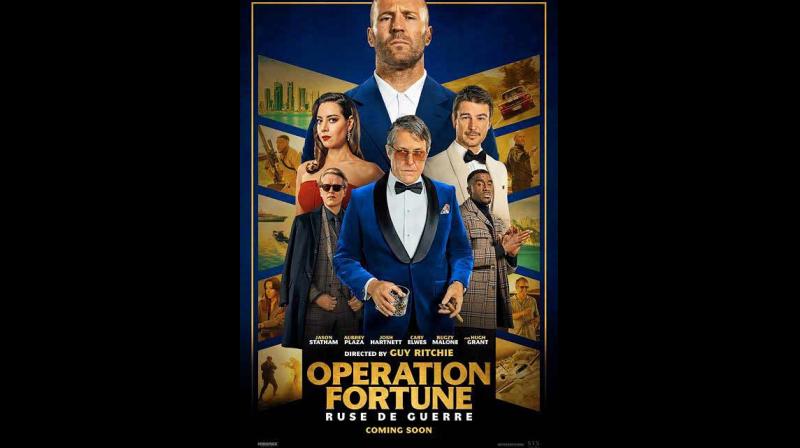 The Jason Statham-Guy Ritchie pairing has become a quintessential action staple to the genre, which has its own dedicated cult following. (Photo By Arrangement)

“Operation Fortune: Ruse de Guerre” is an espionage film, but with the signature self-awareness and wit, the best of Guy Ritchie movies are known for.

The Jason Statham-Guy Ritchie pairing has become a quintessential action staple to the genre, which has its own dedicated cult following ready to engage in the stylish setups, slick action choreography and snarky banter to boot.

Orson Fortune (Jason Statham) has a high-stakes job and he knows it. As one of the finest mercenary spies of a global espionage operation whose sole purpose of existence is to maintain the equilibrium of world affairs, he makes sure to fully exploit the perks of the high life as he takes off on a moment’s notice to anywhere in the world.

Nathan Jasmine (Cary Elwes), Fortune’s handler, loves the results but not the bills his high-maintenance ward produces for saving the world.

JJ (Bugzy Malone) and Fortune, are informed by Nathan the team that John, Fortune’s regular tech genius assistant has been swapped out for Sarah Fidel (Aubrey Plaza) - a kooky, smart-mouth whiz kid with a penchant for inappropriate retorts, better equipped to handle the highly sensitive mission that involves stopping the exchange of a deadly new weapons technology from happening.

The only lead they have on the deal is the identity of the person brokering the deal - Greg Simmons (played by the ever-swoon-worthy Hugh Grant). The team finds an opportunity to get closer to Simmons by getting him the only thing he hadn’t been able to buy - a friendship with the action superstar Danny Francesco (Josh Hartnett).

Guy Ritchie plays it smart by equipping the story with all the staples of the spy thriller, then turning the dial to the double to deliver a smartly acted, beautifully designed spy thriller that is not afraid to poke fun at itself and the more famous counterparts of Orson Fortune.

The Bond films, over a period of time, have become a smorgasbord of luxury product placements and exotic lifestyles that are firmly at the centre of the character’s identity. The tropes of expensive gadgets and top-of-the-line technological infrastructure at the disposal of other famous movie spies like Jack Reacher and Bourne, who are also experts at weapons and hand-to-hand combat are carried over cleverly into the underhanded commentary about the lavish excesses we come to take for granted within the espionage genre.

The action choreography is extremely well done and takes centre stage in keeping the pace of the movie pacy and upbeat. The writing is quippy, made even better by a cast that enjoys electric chemistry and clearly had a blast filming.

Brash, bold and chock full of dark humour, ‘Operation Fortune’ is a fun watch for anyone who loves spy movies or action cinema and a welcome update to the Statham - Ritchie partnership on screen.