Nothing wrong with being ambitious, but wish he had made an attempt at learning how to write a taut, engaging plot too! 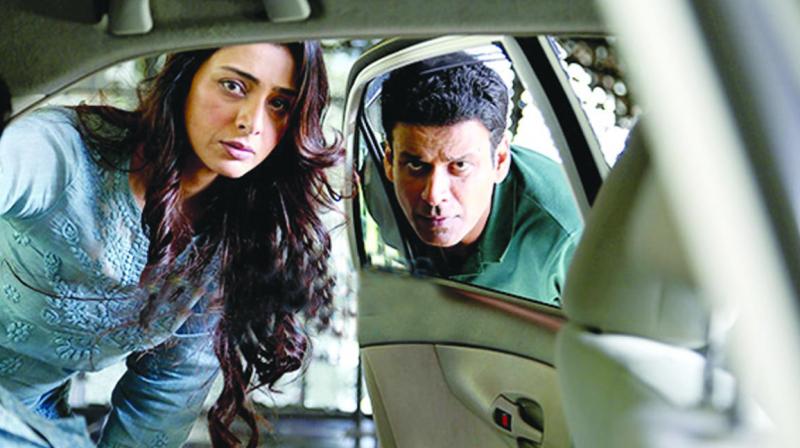 A still from the movie Missing
Rating:

Life goes out of gear for a couple holidaying in Mauritius: their three-year-old girl disappears from the resort they have checked into, and, obviously, they are devastated.

From then on, a motley mix of genres — right from mystery to whodunit to suspenseful drama — get thrown into the plot leaving us with little choice to get involved in the action.

Debutant director Mukul Abhyankar’s Missing may not have been anything that one hasn’t seen before, that too umpteen times, but it does have a riveting story right from the opening scene. Does it also deliver? Without giving spoilers, and just to amuse you all, let me warn you that Abhyankar in an interview claims that Missing is his tribute to Hitchcock! No less!

Nothing wrong with being ambitious, but wish he had made an attempt at learning how to write a taut, engaging plot too!

Missing, despite its promising premise, is a misfire that turns into a silly and borderline absurd story that cannot execute its twists and turns. It falls into a common trap: by trying to do too much, it accomplishes too little.

Sushant Dubey (Manoj Bajpayee) checks in at a beach resort of Mauritius late night with his lovely wife Aparna (Tabu) and their three-year-old daughter, Titli, who has high fever and is cozily snugged into her mother’s arm. Aparna, who is visibly fatigued after a late night travel itinerary, settles her child comfortably in bed and dozes off only to wake up the next morning and find her daughter missing.

When the police are informed and investigations begin, more questions begin to deepen the mystery. Sushant is patient but discreetly ambivalent towards Aparna. Meanwhile damning evidence keeps turning up, as both Aparna and Sushant cover up for each other revealing that they may not be a happy couple. Or, even a couple. The film deploys flashbacks, while the investigation unfolds, and many unusual details about them begin to add weird twists: Does Sushant love his family? He seems someone who keeps flirting with women, and hides behind a mask of politeness and decency before outsiders. Aparna doesn’t wear her heart on her sleeve: she too has a secret, and behaves rather awkwardly, intermittently losing her cool one moment, and shedding a tear whenever she recalls her missing child.

Sushant displays uneven shades of both virtue and abrupt and impulsive evilness, more in the presence of the local police chief Ram (Annu Kapoor), who for some strange unexplained reason, is puzzled but keeps cracking miserably low jokes. Ram responds with quips presumably to add colour to his personality. That he irritates rather than amuses, could easily be because of poorly scripted lines for an actor of Kapoor’s calibre.

Raising our expectations high and claiming to take us on a journey full of intrigue and unknown, the film juggles between several thrilling moments, and as many unclear and imprecise situations that throw open several queries for the viewers. Sadly, it falters because there’s a skill to visualise and adapt a plausible story that not all filmmakers have — no matter how many gumshoe elements abound. This is especially all the more challenging if the narrative is not inherently cinematic and requires more adept handling to shape it into a form capable of fitting comfortably into a two-hour time slot.

Missing is a victim of messy handling and is beset by problems related to flow and coherence. Worst is, when the narrative gets confusing, the dead-end subplots end in sudden twists to ensure that we make up our minds to sit through some more baffling moments for the characters for development.

Though the film can boast of good background score and has a tonal consistency throughout, the carefully woven secrecy during the investigation pitched as highlights, tend to annoy.

In 2003, Ron Howard’s The Missing and the Costa-Gavras’ tense political American drama Missing made in 1982 were exceptionally great films. In comparison, this Bollywood film — though that has no similarity with the aforementioned films except the name — is at times, laughable, messy and too ambitious a film that may have been motivated to pay homage to one of the most influential filmmakers in the history of cinema, but the bits of “thriller elements” shrivel up along the way. The climax looks straight out of a short film that invariably stuns with a bizarre development.

But it cannot lift itself out of so much gloom and grimness, even with seasoned performers like Bajpayee and Tabu, who try their best to rise above a muddled script!