Choked review: A plumbing miracle that loses the plot

Choked is concerned mostly with the family of three wife Sarita, husband Sushant and their bright but often neglected son, Sameer 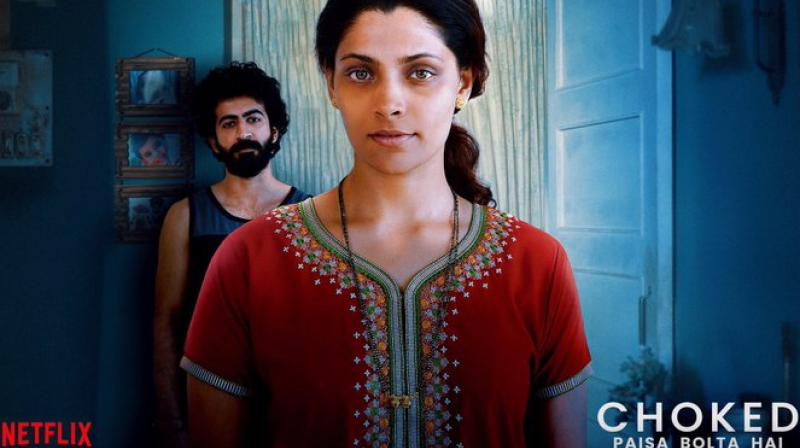 Choked, a film written by Nihit Bhave and directed by Anurag Kashyap, is set in a housing society in Mumbai that is, quite literally, close-knit. It is made up of uniform, tightly circumscribed flats the same one that has been imposed on middle class India universally, since Independence, as if fulfilling a communist pledge.

As if these house, with their all-too-familiar layout, is designed to teach them to stay contained and content in just this much.

As if even a slight change, an inch more would not be wasteful, and morally reckless.

The houses in the society are stacked on top of each other, sharing staircases, sewage pipes, play area. Here, when one kitchen sink gets clogged and is ignored, the kitchen below begins to go damp and peel.

Sarita works as a cashier in a bank while Sushant strums the guitar and has mostly been in between jobs, owing money to this one, trying to collect money from that one.

Their life in the society is encased by the familiar kitty parties, spying neighbours and gossip.

There's also Sarita’s neighbour (played by Amruta Subhash) who is preparing for her daughter’s wedding, while Sushant’s neighbour and business partner throws taunts at him over a game of carrom.

Sarita, fed up with Sushant’s inability to reduce her financial burden and frustration, goes about her day with the sort of miffed silence that comes from believing that life is not going to give you a way out.

That the one chance you had, you wasted it. Sometimes at night old memories flash in Sarita's head and choke her.

There is wit in the film's plot when it embraces the capricious nature of life and throws Sarita a life-line, a nightly miracle.

As Sarita’s life changes, the film brings in that now-almost-surreal night of 2016 when Prime Minister Modi appeared on our TV screens to announce that the notes in our wallets, the precious ones saved for a special occasion and lying in envelopes under piles of clothes, or rolled up and hidden in rice boxes in kitchens were no longer valid.

Alongside the public jubilation of those who mistakenly see the move as a deadly strike on black money, are middle class women in the society and long bank queues whose worlds shatter as their small savings and plans come to naught.

We are with Sarita till now  invested in her nightly obsession, watching the clock for her, worrying about a blackmailing stalker and excited as the pulse of the film rises. But then the plot contrives to and a with a terribly cliched twist its heartbeat flattens.

We lose interest in Choked, Sarita, her, her desperation and her joy.
Choked seems to say that after life cuts you a break, it often breaks into a half-smile and takes it all back. But the film says that by using such an old, trite, filmy plot device that Kashyap should have felt embarrassed to even direct that scene.

I am not a plumbing expert but accepting a lot of what goes down and then gurgles up in Choked depends on your understanding of how sewage water and its contents travel down, as well as your low expectations from Netflix’s India content.

There is a special kind of creative mediocrity that Netflix seems to be backing and funding in Indian. And Choked makes the cut.

What works and keeps us engaged in Choked are the performances by its actors. Saiyami Kher's Sarita is an empowered, independent, working woman who bristles at life every time it tries to interrupt her silent meditation over its numbing routine and cruelty.

There is a sensuality to her that Sylvester Fonseca’s camera catches but, thankfully, Kashyap doesn’t exploit.

Amruta Subhash is very good and though Roshan Mathew looks like a misfit in this setting a languorous, sweaty Keralite transported from a coconut tree shaded verandah to this concrete maze he is cute and efficient.

There is a stylistic flair to the film’s cool background score and sharp editing, both of which seem to insinuate more excitement than the film’s plot and direction are capable of.

Choked promises more punch that it has the ingredients to deliver. Thus, it disappoints.