A cat and mouse game begins where cops chase killer to save cops, but the killer is always a step ahead. 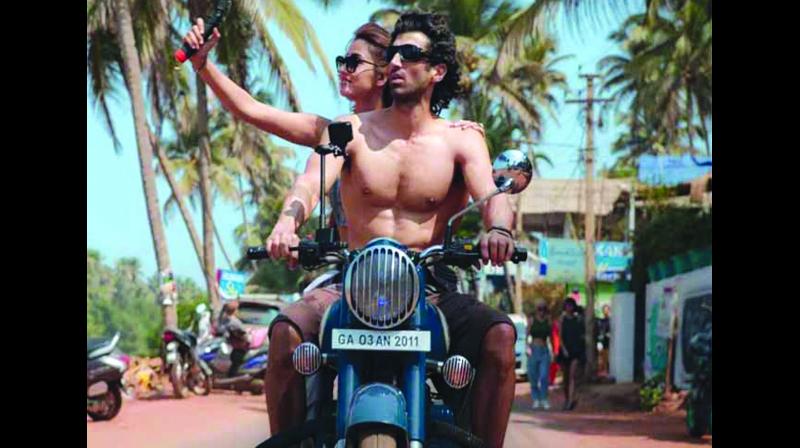 Aditya Roy Kapur is quite cute and in the film he is not allowed to keep his shirts on for very long.
Rating:

Girls like Aditya Roy Kapur. Boys like Disha Patani. In Malang, the sum total of the clothes they wear and then quickly take off will barely cover your double bed. If yours is a single bed, then it’s a different matter. You’ll have some spare thingies to hold up and wonder what exactly to use it for.

But there, in a nutshell, is the whole point of Malang which is set in Goa which, as per Bollywood, is a land of drugs, rave parties, hippies who are wannabe Sufis, and corrupt cops.

So if you are either into Disha or Aditya or both, you are good to go.

You will return admiring their bodies, wondering how could anyone look so shapely and hot, consider actually visiting the gym you paid the annual subscription for, and maybe getting back on the diet you always are on, but never quite.

But if hot bods on the beach and on beds liptoing around each other don’t rock your boat, then you are better off at home, liptoing to a razai or a book or just pondering the state of Bollywood cinema.

Malang opens on point. We see muscles, bulging biceps to be exact. There’s also a tattoo at the base of the neck. And that muscled, tattooed body is doing pull ups, in a jail. Then, a siren goes off.

We immediately figure who is the hero and who the bad guys are.

We walk behind the tattoo-biceps man as he tackles, one by one, 20 guys — yes, 20, I counted — who come at him before he gets to the main bad guy, who actually seems like a rather cute taklu who had taken the hero’s friendship band and put it around his own wrist.

Hero, not into sharing, beats him up and takes back his friendship band, screams — that’s when we see him, the face of Advait (Aditya Roy Kapur).

And we are transported to a bathroom where a man is sitting on a potty and snorting stuff. Oho, snorting white, powdery stuff, not yellow-yellow stuff.

That’s SHO Anjaney Agashe (Anil Kapoor) who, we realise soon after he has a strange conversation with a man, that he doesn’t just like to snort, but to shoot as well.

Then SHO gets a call from a “killer” informing him about a killing he is about to carry out.

Cut to Michael (Kunal Khemu) who is at a family dinner where his wife is texting her boyfriend.

Cut to a rave party where Sara (Disha Patani) meets Advait and is asked by Jessie with long dreadlocks, “Sukoon ya mazza — kya chahiya?”

But Advait and Sara get laid and then they get talking, about this and that, life, and the many knots on her wristband. Each knot is a darr, she says, that I have to overcome. And then she lists out many in what is, perhaps, the film’s only real, honest moment.

“One day I want to drink cheap beer, eat as much as I can,” she says.

Given the size of her waist and its ratio to some seriously enhanced stuff, it’s clear that she has not eaten for days, and doesn’t plan to either.

But cheap beer? I mean, you are in Goa. Just have it na.

Over the course of many needless songs and scenes that seem to have been constructed for Instagram, we learn that both Advait and Sara have mummy-daddy issues and that is why they are drifting.

We soon also realise that not just the two of them, but the entire cast of characters of Malang have serious psychological and neurological issues and they are all desperately in need of therapy. So much so that they are either loitering around getting laid at random, or just going around killing people.

A cat and mouse game begins where cops chase killer to save cops, but the killer is always a step ahead.

As he keeps offing cops, the cinematographer (Vikas Sivaraman) keeps taking aerial shots of Goa beaches and the director and writer (Aseem Arrora) keep up the pretence that they are keeping us engaged with some deep secret and suspense.

That’s really silly because, a) we were not born yesterday and have seen enough movies, from Ghajini to whatever, to know that when angry young men, who once had girlfriends who are no longer by their side, go around killing cops, it’s because the cops did some bad things.

b) The building of suspense in at least the first part of Malang is of the stupid kind. It’s created not by the writing or the plot so much as by cutting scenes at the crucial moment — like those silly ads that come just before the last ball in a match. It’s not called building suspense. It’s called irritating the audience.

After the interval the movie picks up a bit, and there is actually a mild twist.

It’s not bad, but then it is stretched in such bizarre, kinky directions that I lost interest.

Aditya Roy Kapur is quite cute and in the film he is not allowed to keep his shirts on for very long. Which makes sense because he is insanely dull when he has to do anything other than express this one emotion —“I need you so bad I am going to burst”.

Ms Patani is shapely and it’s quite obvious that she lives quite far away from any acting school. Someone should gift her a friendship band with a knot that must be untied after attending at least a hundred acting classes.

Anil Kapoor’s character has been given a gun and a loud guffaw, the sort that throws little spit beads on unsuspecting faces. Despite that, he begins the film with a drug-induced conversation where his stare is dead and unflinching. For a second, I thought he had actually snorted something.

Kunal Khemu makes good of a very badly written character and adds some zing to this dreary, pointless film.

Mohit Suri’s film is set in Goa for a reason. It allows him to show smoking, drinking, drugs, rave parties, lots of skin and random sex without having to bother about a story.

So, he didn’t bother.