Shikara declares, at the very onset, that it has mostly used real refugees and not actors for an authentic look and feel. 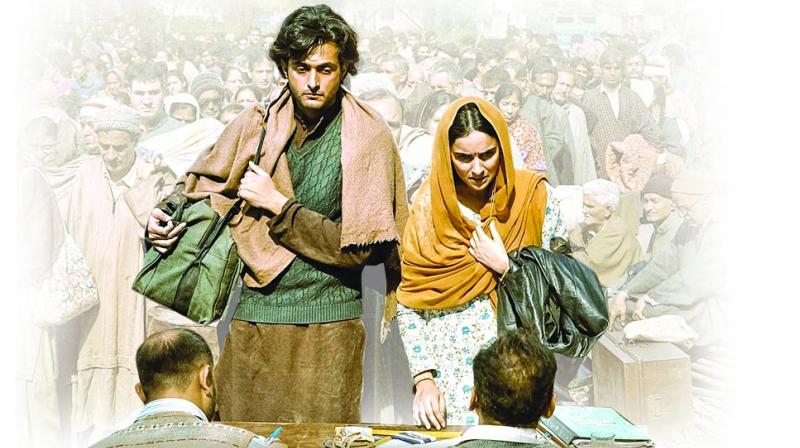 Shikara should have also declared that it has simplified the story to let nothing interfere in the narrative of the tragedy of a people.
Rating:

Writer-director Vidhu Vinod Chopra’s Shikara, that tells the deeply sad and tragic story of Kashmiri pandits’ forced exodus from their homeland in January 1990, is dedicated to his mother who could never return home.

It’s personal. And a labour of both, love and exhalation.

The tragedy of four lakh Hindus being driven from their homes, jobs, schools, lives and rendered homeless, refugees in their own country by a handful of militants while the state and Centre watched is unfathomable, unpardonable. In more ways than one, it was like the second Partition.

Shikara declares, at the very onset, that it has mostly used real refugees and not actors for an authentic look and feel.

Shikara should have also declared that it has simplified the story to let nothing interfere in the narrative of the tragedy of a people. No complexity, no politics, no crimp are allowed in, not even suggestion about where the blame may lie. According to Shikara, it doesn’t really lie with Delhi, neither with Srinagar, nor with the Delhi-appointed governor, Jagmohan. It lies with Islam, Pakistan-trained militants, but above all with Kashmiri Muslims who either turned foe or rapacious.

There is, of course, no deadline on telling a story. But the timing of when one decides to tell a story often carries a story of its own.

It’s almost as if Shikara was timed to appear after the abrogation of Article 370. As if to justify yet another tragedy perpetuated by the state.

There is a tinge of obscenity in accusing a people of complicity in a crime when they are under lockdown, muzzled, turned prisoners in their own homes.

In Shikara, Vidhu Vinod Chopra is often at pains to say that he is against hate, any shade of hate. And even adds, for good measure, that “leader ka kaam jorna hota hai, todna nahin”.

But his film fits a certain narrative that’s in currency, one that tries to justify state-sponsored atrocities in the name of righting past wrongs.

In 1987, young Shiv Kumar Dhar (Aadil Khan) meets sweet Shanti Sapru (Sadia) at the shoot of a Bollywood film in the haseen vaadiyan of Kashimir.

She is training to be a nurse and he is a writer, poet and soon-to-be professor.

When they meet, she is clutching a book of his poems and he, on the insistence of a director’s assistance, grabs her hand.

They have a cute, short courtship after which they marry, in the course of which it is established that Shiv’s best-friend, Latif miyan, is soft on the heroine’s bestie.

Shiv and Shanti want to build a house for which his bestie’s dad, Khurshid saab, sends stones after stopping the construction of his own house, thus establishing a utopia where all was well and Kashmir was indeed a paradise.

But Khurshid saab, a Muslim leader, is killed, and Shiv, who now teaches at Srinagar’s Amar Singh College, is whisked away to meet his friend who is being guarded by boys carrying automatic assault rifles.

“Go to India, sell your house and go to India,” he is told.

J&K Commander Force puts out hit-lists of Hindus who must leave or face consequences.

Some prominent pandits are killed, including Shiv’s Naveen bhaiyya and, on the night of January 18-19, 1990, Shiv and Shanti leave for Jammu with other Kashmiri Pandits, abandoning on the way a calf.

And then, many years later, a man comes to Shiv, asking him to sell his house. That’s the day Shiv writes his first letter to the President of America.

Shikara, in fact, opens when Shiv is writing his 1,664th letter to the US President on his typewriter in his 28th year in the Muthi Refugee Camp. Though this is a recurring theme in the film, it’s not quite clear to me what he says in those letters apart from telling George Bush and subsequent US Presidents that the guns they sent to Afghanistan are being used to kill Kashmiris.

In these letter-writing scenes, Shanti often suggests to Shiv to share stuff from their personal lives, some happy news as well with the US President, as if he was their friend, reading Shiv’s letters, interested in their lives, waiting for the next one even if he’s unable to respond or help.

There is a particularly troubling melancholy to the dogged discipline of letter writing, posting and repeating the exercise without a response or riposte from someone you think has the power to change things, better your life.

It carries a hint of being driven to quiet madness by a tragedy, apathy and yet an attempt to clutch onto some dignity in the relentless, scholarly appeal.

Shikara has a few such tiny but brilliant vignettes that are cinematically quite clever, powerful.

The film, written by Abhijat Joshi, Rahul Pandita and Vidhu Vinod Chopra, uses these to layer the story, and make the unbearable, bearable.

But the film’s real power comes from the love story of Shiv and Shanti who hug and clutch at each other every time something bad happens. They are not just shielding and protecting each other, but there’s almost a belief in that action that the sheer power and tenacity of their grip around each other will dissuade the storm coming their way.

As Shiv and Shanti move from the tent to an 8x8 pucca apartment, we see how she quietly deals with her own trauma, or shares his. And when they move around the presidential suite of a hotel in awe and finally sit in the bathroom, next to a bathtub decorated with rose petals, it’s their bond, their love which makes their yearning for their home very touching.

Shikara’s casting, by Indu Sharma, is inspired. Apart from people from the Jagti refugee camp, many of whom have a blank, forlorn wait in their eyes, it’s Kashmir-born Aadil Khan and Sadia as the leads who really bring a breeze of the Valley to Shikara.

Both are good and the rough, amateur edges they have, obvious in between scenes where they don’t have dialogue, is actually very fresh, very charming.

Sadia has a bit of Leela Naidu and Swaroop Sampat in her, and Aadil has an old world charm born out of not just good looks, but decency. Together, they add a moral sting to this tragic tale.

Often, writers and directors who want to tell big, sweeping, epic tales of historic proportions, turn that into a backdrop, placing front and centre a love story. It’s the easiest way to humanise a story, to give a face to a tragedy. But in those choices, in who those characters are, what they say and do, they also sell a worldview and make a statement.

The problem with Shikara is not that it wants to tell the story of a people forced out of their homes. But that it paints the common Kashmiri Muslim as a colluder, an active one at that.

The film shows two types of Kashmiri Muslims — one who turned to militancy and killed Hindus, and the other who, at least on the surface, tried to save their homes, but did so only so he could take them over.

There is no third type of Kashmiri Muslim in Shikara. But there is a cow. Calf, actually, lost, sad and abandoned. The film weeps for the calf, but not for the thousands of Kashmiri families who have, since 1990, lost a son, a husband, a father, a relative, friend or neighbour to bullets that sometimes come from militants and sometimes from the Indian Army.