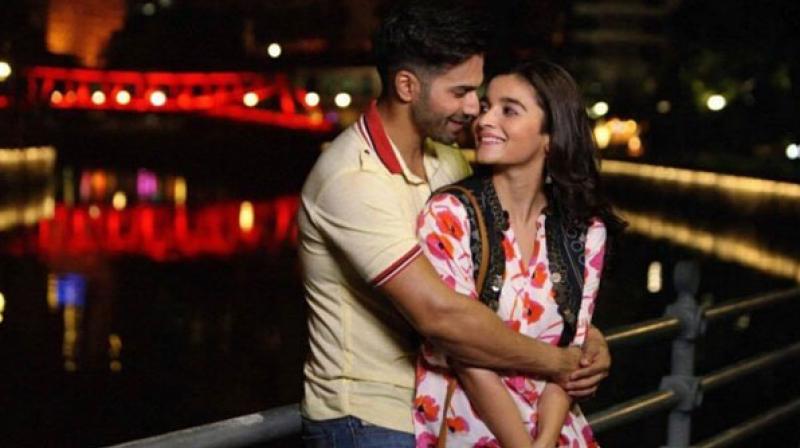 Looks like it's the season of women centric films in Bollywood and the reviewer feels that it is a brave attempt on the part of the filmmakers for breaking the myth that Bollywood is a male dominant industry.

With films like Pink, Dangal, in the recent times, it is obvious that films with a social message is the new flavour of Hindi film industry. Director Shashank Khaitan brings you all yet another quirky film after his maiden venture, Humpty Sharma Ki Dulhania, but this time he’s rich on content and emotions.

Badri (Varun Dhawan), runs his family business of automobiles in Jhansi. His best friend Somdev (Sahil Vaid) is his earnest disciple who owns a match making portal. Badri meets Vaidehi (Alia Bhatt) in Kota while the two discover each other at a common friend's wedding. Badri falls for her but Vaidehi aspires to become an air hostess and her family wants her to marry Badri considering his status in Jhansi.

Vaidehi agrees to marry Badri only when he assures her that he will find a suitable match for her elder sister Kritika. Meanwhile, Badri and Somdev find Bhushan (Aparshakti Khurrana) and hook him with Kritika. On the D-day, Vaidehi escapes and ditches Badri. What happens next is what the film is all about. Will Badri take revenge or will Vaidehi come back to her lover boy?

Director Shashank Khaitan has hit the right chord by choosing such a social concept which is relevant in the modern day context (which is also the current flavour of Bollywood). The best part of the film are his quirky dialogues and narrative. Telling a social story keeping the fun element intact isn't an easy job. The film is surely better than Humpty Sharma Ki Dulhania in many ways. Set in small cities Jhansi and Kota, the film highlights the sensitive issue of dowry which still exists. The film also talks about living for your dreams irrespective of the gender. A big shout to the producers Karan Johar and Fox Studios for making an entertaining film on gender equality. Of course, the film has flaws, especially its length, which could have been easily shortened in the second half. Another flaw in the film is that above all it's a Dharma film so love has to win in the end. The climax of the film is so predictable that you won’t mind leaving the theatre even before the end credits role in, unless you want to see Varun and Alia grooving to the title track.

The reviewer feels the film would work in the small centres for its emotions and in multiplexes for the actors. If a filmmaker is trying to make a film which has a social message like this in a light hearted way, the film might not work because our Indian audiences still want to see a ‘serious’ film with a social message. It is more or less like a revolution!

Coming to the actors now. Varun Dhawan is an eye catcher in every frame. He represents the entire clan of boys who are suppressed by their families to take dowry from the girls they want to marry. His dialogue delivery and tone are just perfect. With every film, Alia Bhatt proves that she is the best of the current lot. She represents the section of upper middle class society who aspires to dream big and voice against the evil society. Yash Sinha, Shweta Basu, Swanand Kirkire, Aparshakti Khurrana and Gauahar Khan are good in their respective roles. A huge round of applause to Sahil Vaid who adds a comical element till the last frame.

Overall, Badrinath Ki Dulhania is a one time watch which has humour, social message, good looking actors and high degrees of emotions.