Jabariya Jodi movie review: Too wobbly to make any sense!

The latest to fall victim to such a slapdash presentation is Jabariya Jodi, a Siddharth Malhotra and Parineeti Chopra starrer. 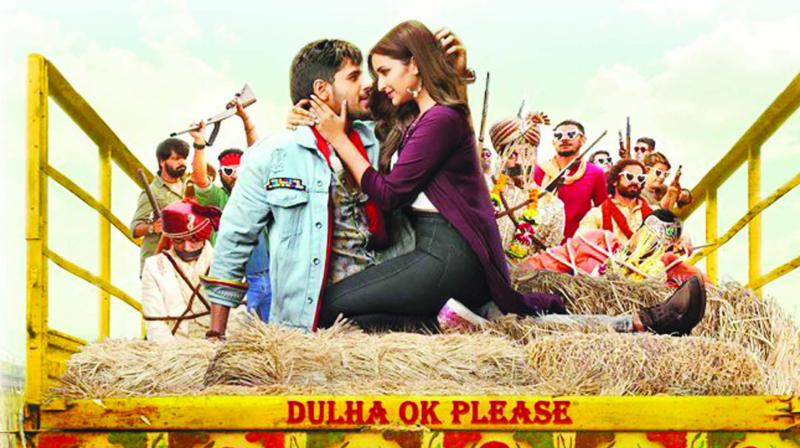 The story continues in the direction of a major crisis and an erratic climax with precious little hope.
Rating:

Those of us who are familiar with the structure of a film or its script would know the idea of the beginning, the middle and the end that constitutes any film. The Hindi film format that gets divided into two parts — pre-interval and post —often gets wobbly, with not one but two diametrically opposite narratives trying to achieve a distinct purpose.

The latest to fall victim to such a slapdash presentation is Jabariya Jodi, a Siddharth Malhotra and Parineeti Chopra starrer. Based on the social issue of forced marriages that are common in Bihar and a few other cities of India too, the film could have been a fun ride all the way, only if it had humour thrown in for good measure. Instead, what we have is an over-hasty work ,offering us some of the glaring issues that constantly plague the film, and little respite. The story continues in the direction of a major crisis and an erratic climax with precious little hope.

The Patna-based, supposedly cool dude Abhay Singh (Siddharth Malhotra), is a thug whose primary job of kidnapping young men and forcibly making them marry girls at the behest of his father Hukum Dev Singh (Javed Jaffrey) gets them huge amounts of cash in return. The grooms are miserably helpless and such, or the young girls too, who are not really happy — but who cares in a place where Hukum lives in a huge palace and everyone seems to bow down before him? For the father-son duo, by kidnapping hungry-for-dowry young men and compelling them to do marry against their will, is somewhat of a social service that they take pride in. Abhay too, doesn’t think he does any wrong though. Passing off his crime as an act of valour, he continues to follow his dictatorial father’s command, much to his mother’s (Sheeba Chaddha) discomfort.

In another part of the state, a young girl Babli (Parineeti Chopra), who happens to be Abhay’s childhood love, decides to teach her boyfriend she was about to elope with, a lesson. She calls a television crew and records her beating him up live publicly when the boy ditches her at the eleventh hour. She becomes an overnight celebrity and the rebellious streak in her emboldens her further. When she and Abhay meet after a long gap, and needless to add, sparks fly, the two take off from they had left off many moons ago. It is Babli though, who seems to be enamoured of his charm more than Abhay, for whom Babli is just another girl he sleeps with. He gets cold feet and tries to convince himself that he is no longer in love with her: it was his confused state of mind that made him go along with the firebrand Babli, and make her feel special.

When Babli feels jilted after Abhay’s sudden turnaround, another her childhood best friends of hers, Santosh (Aparshakti Khurana), comes to her rescue. Thankfully, to mitigate the tension that leads to more confusion for the audience, she has one bright spot — Santosh. Someone who would stand up for her at all times. He is summoned hastily to tie the knot with her. He realises that Babli loves Abhay and the two are separated only because of their ego  (Babli’s) and self-doubt with a state of indecision (Abhay’s) while Santosh is the only one who knows and comprehends what love entails.

Writer Sanjeev Jha, like most of us, is familiar with the idea of an  entire story having a feel of emotive content that abounds in dollops of confusion between lovers, a bit of parallel comic tracks, songs and dances, and a bitter opposition to call a two-hour-long film masala entertainment. But perhaps, cohesive storytelling is what he misses out on. As a result, his film is neither social commentary nor a comedy. Unable to decide where the story starts, or what happens to the characters for the duration of the film, and then how it all resolves (or doesn’t resolve) before the screen fades to black and the credits roll, he is thrown off balance, and gives us a convoluted tale that is most unconvincing.

Even if it had some great lines or performances, one would have enjoyed and called it a “paisa wasool” mishmash of a film. The failure of the lead actors — both Chopra and Malhotra — to look satisfactorily credible in their respective roles, is yet another major drawback of the film.

Malhotra looks too suave for a character who has grown up in Bihar. His Bihari accent slips every time he concentrates more on his looks (tatooed arms, flashy shirts, torn jeans). Why he does back off when he seems to be in love is never explained to us. He looks too self- assured to have any kind of commitment phobia. Chopra doesn’t go beyond the standard one-expression look. It’s a pity that the two, who starred in a rather offbeat and full of laughs Hasee Toh Phasee a few years ago, where both shone with a promise to deliver, can give us such a dud.

Among the rest of the cast, the ones who are always dependable, and always manage to bring in their own appeal, suffer too. Sanjay Mishra, Javed Jaffrey, Sheeba Chaddha and Abhay’s best friend Chandan Roy Sanyal have nothing significant to add to the dismal screenplay that consistently produces moments that induce a few chuckles, but not belly laughs. There’s also a sentiment thrown in as an afterthought to the farcical humour at times, which adds to one’s misery of sitting through such a film.

Coming back to my point of the structure, while the main conflict has to get resolved, and the loose ends have to be tied up, the tension-filled denouement must also fall quickly. It looks as if Jha and two other writers credited for the screenplay knew from day one that they had to make a happy-ending-film about a serious subject like young men being bullied into matrimony but didn’t know what all to fill in the in-between space with. What we finally get is a predictably clumsy and dispensable 144-minute film that collapses while attempting to figure out what genre to adopt!