Akshaye plays Baru with sumptuous deviousness, the sweaty-palm glee of a power-broker. 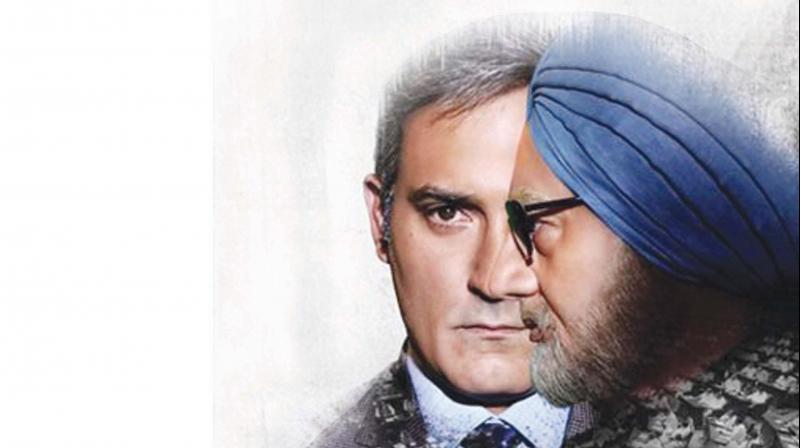 Still from the movie The Accidental Prime Minister
Rating:

The charge goes that many Indians, but most vocally its elite liberals, hold the concept of and commitment to secularism above all else. That they are so loathe to the idea of a Hindu-supremacist party enforcing its Hindutva agenda, they often overlook the flaws and misdemeanours of the Congress Party. That for them, which includes me, the full term of this BJP-led government has been like living through a long, unending moment of personal shame.

Because, well, TINA — There Is No Alternative. But, more importantly, the reason is that unlike the BJP, the Congress doesn’t have a divisive, bigoted agenda that considers all non-Hindus second-class citizens, and neither is corruption its stated policy. There were corruption cases, yes, but corruption can be dealt with. But a nation split on religious lines and seething with hate can never heal.

But bhakts don’t like nuance. So they present the choice as one between the Gandhi Family versus a party born out of a misplaced sense of Hindu victimhood. And to bolster their argument, they love repeating some stories, all conveniently skewed, with twisted facts and glaring omissions.

The Accidental Prime Minister, by writer-director Vijay Ratnakar Gutte, tells one such story. The film is a cinematic adaptation of the 2014 book of the same name by Sanjaya Baru, former journalist and media adviser to the ex-Prime Minister.

The book then, and the movie now, focuses largely on UPA I, beginning in 2004, when the alliance, led by Sonia Gandhi, won the Lok Sabha elections.

“Accidental” being the operative term, the Prime Minister that Sonia Gandhi gifted to India, after listening to the shrill bhashans of the likes of Sushma Swaraj, Uma Bharati, her own children and, of course, famously, her antar aatma, is at the centre of it all.

But the film, coming as it does in election year, has an agenda — it’s politically motivated.

And the motive of this tacky, third-rate propaganda piece is all too apparent in the story it wants us to go home with, and the characters it wants us to hate and love.

The Accidental Prime Minister seeks to create a binary world where the Congress is a Ma-Bete ki party propped up by sycophants who draw their power from proximity to the “high command”, and the BJP, led by Narendra Modi, as a party of career politicians. That this BJP government too is, and has been, a two-man show is a fact the film has no time for.

So the two characters the film focuses on are Rahul Gandhi, who is cast like the BJP sees him, as slow and stuttering, but also arrogant, and Modi as the decisive, grassroots politician.

But, like the big, bold headline of the Telegraph newspaper in Kolkata asked today morning, “Are we donkeys?”

The operative thing here is the timing — of the book then, and the movie now. There’s nothing accidental about it.

Baru’s book came out in April 2014, and Modi and the BJP used it to attack the Congress, but especially Rahul and Sonia, before India voted in May 2014.

Now, after being in power for five years, on the eve of 2019 Lok Sabha elections, that same story has reappeared, in movie format.

Again, “Are we donkeys?”

To tell its story, The Accidental Prime Minister fuses news footage with dramatised bits that involve real-life politicians we meet on a daily basis on our TV screens.

No tears are shed over the fact that the woman who led her party to victory turns down the position of Prime Minister, and appoints a man respected by all.

The story begins with Singh’s (Anupam Kher) appointment as PM and, almost immediately, with a deep sense of insecurity, the family begins to undermine him.

It seems that the only appointment PM Singh was allowed a free hand in was that of his media adviser, Baru (Akshaye Khanna).

This scene is so desperate to convey to us the stellar impartiality of the journalist-turned-PR, that there’s no room to pause and wonder why a self-respecting journalist would get entrenched with one man, one party.

Baru would like us to believe that he was appointed because Singh “wanted to hear the truth”.

“You be my ears and eyes, my Sanjay,” Singh says, suggesting that he himself will assume the role of the blind Dhritrashtra.

The arrogance is staggering.

Baru, as the narrator, conducts himself in the cinematic style made fabulous by House of Cards. He breaks the fourth wall and talks directly to us, to tell us how politics is played and the players behind the scenes.

Above all sits the family — Sonia Gandhi, Rahul and Priyanka — as the chief mover-shakers.

But Baru is more than the sutra dhar. He’s a player as well, batting for Singh, but as someone who has nothing at stake. Just a bestseller in the making.

The story he chooses to tell, then, is of the PM versus the party, or, well, PM versus 10, Janpath.

With selective episodes, the movie shows the power the Gandhi family held over Singh and, by extension, the PMO. How, instead of empowering their Prime Minister, the Gandhis tried to disempower him.

The PM is shown as being humiliated, repeatedly, by his own party. The message that’s constantly relayed and reiterated from 10, Janpath is that all action, moves of the government must reflect that it’s Sonia Gandhi’s sarkar.

Thus the NAC, thus a bureaucrat appointed especially to liaise between the PMO and 10, Janpath. Files, appointments, all come to the PM edited, whetted, approved. For his signature, and rubber stamp.

There are attempts to erase the legacy of former Prime Minister Narasimha Rao, who is denied a final resting place in Delhi.

And on the rare occasion when Singh asserts himself, there’s talk of replacing him. But his attempts to resign are dismissed because the time, he is told, is not right for Rahul.

The nuclear deal and Singh’s insistence on it is highlighted as a moment when he did show some spine, leading to the Left pulling out.  But also that Singh’s government’s return to power in 2009 was credited to Sonia and Rahul.

The story that the film doesn’t tell is that the NAC, often called the jhola-wala grouping, was responsible for several key bills passed by the UPA governments — The RTI Act, the Right to Information Act, the Right to Education Act, Employment Guarantee Act, and the Food Security bill.

It also doesn’t tell us that for the first time ever, in the Congress’ history, Sonia Gandhi announced the name of the party’s PM candidate in February 2009, when Singh was recuperating from a heart surgery. India voted in April 2009.

It also doesn’t show, ever, any sort of proper communication or bond between Singh and Sonia, or Singh and Rahul. He is shown as a minion in their entourage.

And that the party and Sonia Gandhi supported Singh’s stand on the nuclear deal is not mentioned even once.

There’s lots more, lies and omissions, but not enough space…

Usually, watching real-life characters on screen is delightful because immediately our mind whirs into action, trying to figure if they are the perfect clones of personalities we know. If their mannerisms, look matches.

The Accidental Prime Minister focuses a lot on its characters’ physicality, trying to get their look right, but investing each with one trait only that it wants the audience to imbibe.

Though the utterance of the word “Family” and dialogue that refer to it have been muted, there’s enough going on to convey what the film wants to.

Sonia Gandhi (played by Suzanne Bernert), who in real life, smiles a lot, is shown as a pursed-lipped cold, calculating backroom player who gets others to do her bidding. And all her efforts, it seems, are devoted only to keeping the family entrenched.

When he speaks, it’s as if he is trying to physically conjure thoughts and then put them in coherent words.

Anupam Kher has compared his performance in this film with that of Oscar-winning actors such as Ben Kingsley, Daniel Day-Lewis and Meryl Streep.

That a man with the politics of Anupam Kher, who is happy to continually contribute to the Hindutva agenda, and quite brazenly feeds into the cult of Narendra Modi while spewing fire at the Gandhis, got to play Singh should be considered an honour.

But Kher plays Singh mostly physically — as effete, weak, bent beyond recognition, like a robot. The puppet-like hand movement is comical and disgusting.

His Singh barely smiles, makes an effort to speak, as if mute were his default position.

Perhaps none is more complex and complicated a legacy than that of Singh.

A man of sound intellect, great personal integrity, humility and above all humanity, but also one who, in his second term, couldn’t reclaim the position of Prime Minister.

Though he skated his government for the nuclear deal, but he also presided over, quietly, even if visibly troubled, corruption by his own Cabinet colleagues, ignoring the significance, stature and prerogatives of the Prime Minister as mandated by the Constitution.

Though there are fleeting moments when Kher invests him with emotions and turmoil, the abiding image that remains is of a cartoonish character without a moral spine.

Mrs Singh, played by Divya Seth, is quite fabulous.

As is Akshaye Khanna’s Baru, the film’s favourite character.

Whenever Akshaye comes, the accordion perks up.

His Baru has a swagger and demeanour that’s chuffed by his power, understanding of and ability to play the game.

He’s a dandy, and he preens.

Akshaye plays Baru with sumptuous deviousness, the sweaty-palm glee of a power-broker.

And there are moments when his swag is quite appealing, but the image of the real Sanjay Baru made the thought very disturbing.

Hansal Mehta (director of Shahid, Aligarh) was, apparently, the creative producer of The Accidental Prime Minister. Yet the film is tacky beyond belief. All its interiors are gaudy, gilded, ugly and cinematically it’s insanely rudimentary.

Perhaps he should have been the conscience keeper of the film. That may have kept the film a little honest, less sycophantic.