Things began to unfold a bit too quickly, dispelling some of the mystique that surrounded the first half. 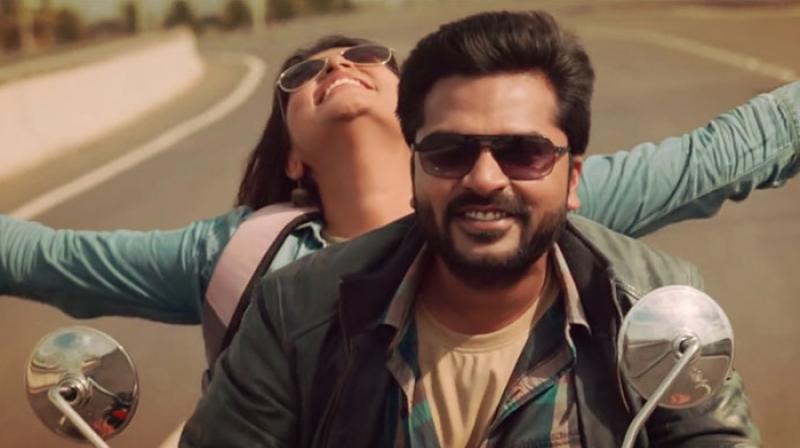 Still from the film
Rating:

The release of much anticipated Achcham Yenbadhu Madamaiyada in the magic combo of Gautham Menon - STR – ARR marks the end of a long-delayed project. When it comes to breezy urban romance, Gautham is undoubtedly a master storyteller and he proves it in AYM as well. He has tried two genres in the movie, which starts off as a cool and glossy romantic tale and traverses to a violent action packed one post interval which the filmmaker calls his attempt to appeal the masses.

In the film, Simbu’s name is almost never revealed, adding a quality of mystery to it. The hero is a well-to-do man with good friends and an economic safety net. He is fond of his bike and waiting for the girl of his dreams. Jobless and with an MBA degree, he comes across his sister’s friend Leela Raman (Manjima Mohan) and falls for her instantly. Nevertheless, he doesn’t really confess his love immediately and in trademark Gautham Menon style, blossoms it over a period with a road-trip being the centerpiece setting.

Now is when things take a drastic turn. A dreadful (and apparent) accident leaves the duo terrified and they are in a rush to save their lives. Simbu is at a loss to understand why is it that he’s being tormented. When things are going south at a rapid pace, decisions have to be made: will the hero despair and give up or will he rise to the occasion? The question kind of answers itself: of course he won’t give up and decides to hit back against his detractors.

AYM is a film of metamorphosis: what happens when a privileged and slightly premature adult faces threats that are more than just about himself. With arresting background music by AR Rahman, the film has a lot of uplifting moments where courage triumphs cowardice. Simbu has been given a meaty role and he does it justice. He has bounced back in the two diametrically opposite characters – a love-struck youth in the first half and a mass hero in the second, handling the action scenes with aplomb. Manjima Mohan as his ladylove is sweet and loveable on screen. She has also dubbed herself with perfect lip-sync. Though Baba Siegel as the uncouth police officer does what’s expected out of him, there’s nothing new by way of characterization as it’s an oft-repeated bad cop in Tamil cinema.

As eluded, music by the Mozart of Madras lifts this film to a higher level. Haunting and beautiful, his songs give romance a binding quality. Cinematography by Dan Macarthur and Dany Raymond sets the perfect mood of two genres - cool romance and an action thriller. A good portion of the second half felt a bit hurried. Things began to unfold a bit too quickly, dispelling some of the mystique that surrounded the first half. And the climax is underwhelming. Still, AYM is worth the wait.