Ang Lee gives us another reason: perhaps these soldiers are more at peace in the battlefield. 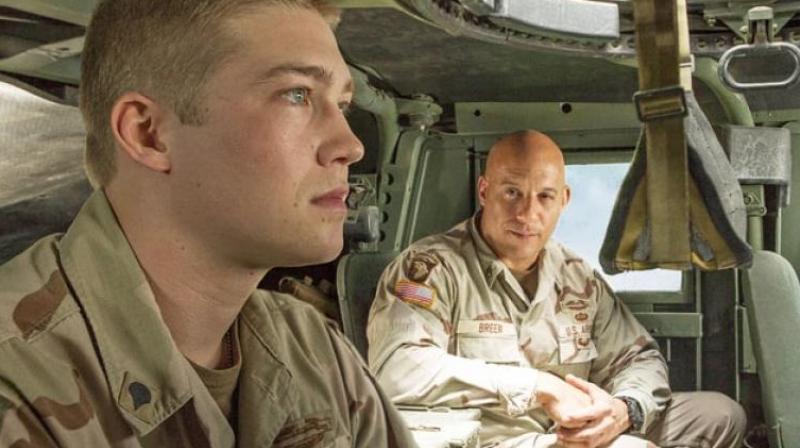 In one of his standup performances, Louis C.K., the comedian, talks about how war or fighting becomes uninteresting and irrelevant after a certain point. People who are keenly observing a fight or a war between nations become oblivious of it and it is then considered as a routine affair. While all wars are in themselves massive tragedies, each one of them tries to justify itself, and so does each side of the war. The American series titled Why We Fight was relevant for the times and we have seen multiple versions and variety of stories that still justify war to this day. Billy Lynn’s Long Halftime War is just not that kind of film. It leaves you with questions, rather than answers. Ang Lee is impressive with his juxtaposition of wonderfully calm and composed footage along with a raw and itchy battlefield coverage. He is able to find a very interesting dissolve between war and celebration, not necessarily when the latter follows the former but in general. Billy (Garrett Hedlund) is a brilliant actor waiting to explode; his presence is susceptible and yet confident.

The group that became famous in the Iraq war is now called as Bravo and is back home celebrating and receiving accolades from friends, peers and celebrities. These are the face of America, young boys who go out in the battlefield and raise the flag high, laying down their lives to protect the idea of America and to help another nation find independence. In this cheerful group, Billy is the one who held his Sargent Shroom (Vin Diesel) while he took his last breath. Billy is the one who had a close fight with a terrorist and to keep himself alive he had to knife him. Billy is the one who has seen death and felt what it is like to feel the warmth of someone’s blood.

While Billy has plans to return to the battlefield and continue being a soldier, there are others who want him to stay back, people who feel he has done enough to stay back, people who really care for him and are scared to lose him to a bullet. But there are others, many of them, the faceless people who sit before their screens watching the heroic presence of Billy on the battlefield, who are proud of Billy and want him to go back. These are people who are filled with pride and aggression every time Billy and his group is present on television or in a crowd. These are the same people who do not have the courtesy to offer him a seat and would pick up a fight with Billy and others in a moment’s disagreement. These are the people who Billy and his friends should fight for.

The fact that even after millenniums of existence and thousands of battles, humanity still keeps fighting is interesting. With wars that continue for decades, it is obvious to see people getting oblivious to battlefield heroism. One wonders then, what maybe the motivation of those who fight? Is it the salaries the soldiers receive? Is it the status and honour that they receive from their peers, friends and family? Is it simply the gratification of killing someone on the battlefield? Ang Lee gives us another reason: perhaps these soldiers are more at peace in the battlefield. Where the relationships are not so convoluted and the only transaction that one deals in is final, fatal. Each of the characters in the story has a wonderful story to tell, each one of them has experienced war in its ugliness and in its pretty philosophy. While this one is Billy’s long walk, I am sure all our soldiers have theirs, when they walk in the shadows, in the memories of their valour, fear and agony.