Performance wise, Naga Chaitanya lives his character. He has grown in confidence since his earlier films. 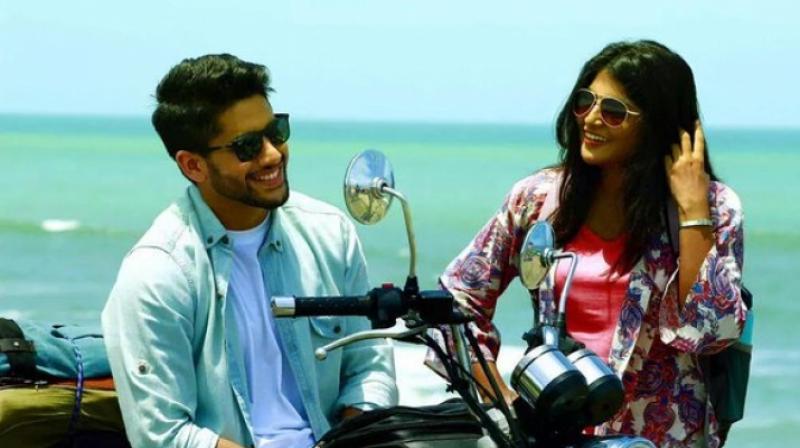 Still from the film
Rating:

Naga Chaitanya has completed his engineering and is studying MBA. He is always surrounded by a group of friends and is enjoying life, until he meets Leela (Manjima Mohan), his sister’s friend. It’s love at first sight and the two come closer when she stays with his family for some time.

His dream is to go on a bike ride and watch the sunrise at Kanyakumari. He tells his parents that he will be traveling by train, but actually rides. Leela too joins him.

They come closer during the journey and while returning, they meet with an accident. Their troubles are compounded when a gang of men attacks them. Who are the attackers, and what is their motive?

Gautam Vasudev Menon has his own style of narrative, which is usually a love story or an action film. In this film too he starts with the narration of the boy’s love story. But when one feels that this film will go the same way as his earlier film, it picks up momentum with the twist. The first half of the film is completely romantic and the second half is total action.

Gautam showcases his skills once again with a mix of romance and action. He shows how a young boy becomes an angry man and that becomes the main point of the film. From then on wards, the movie is a typical Gautam Menon thriller.

A.R. Rahman is superb as always and his songs and background score is the actual hero of the film.

Performance wise, Naga Chaitanya lives his character. He has grown in confidence since his earlier films and is now a matured actor.

This is Manjima Mohan’s Telugu debut and she is beautiful and impresses with her natural performance. Popular singer Baba Sehgal plays a bad cop and he is good at it.

The cinematography is a big boost for the film and Kona Venkat’s dialogues are catchy and interesting.

On the flipside, the first half is a bit of a drag and the climax is not very impressive. However, Sahasam Swasaga Sagipo is an interesting film that will appeal to the youth.

If you have liked Gautham Menon’s earlier films, you will definitely like this one too.