Super 30 tells us the story of the dreamers, and a dream-maker. 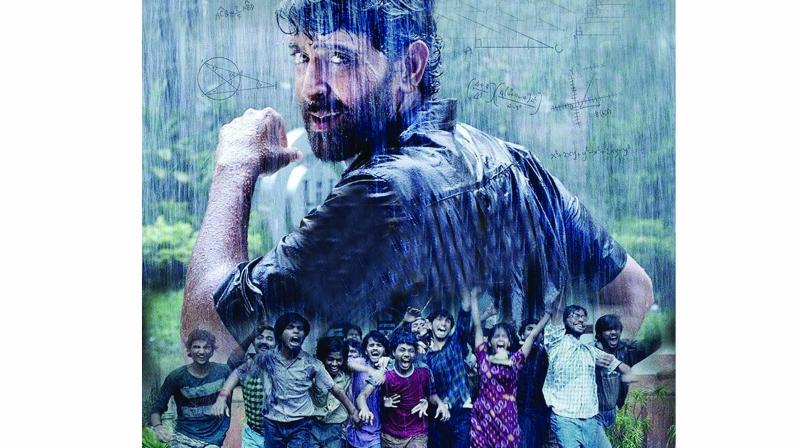 Roshan’s demeanour changes thrice in the film and in each one he is excellent.
Rating:

Imagine… Imagine living a life of daily hard, physical labour, suffering regular abuse and oppression, and yet never having enough money to either clothe or feed yourself.

Now imagine having a dream that offers an escape from that reality,  that holds the promise of another, better life. A dream that clings to your being as you lug bags of cement, clean other people’s filth… when you are laughed at and berated for dreaming.

Now imagine if someone tells you that he has made it his mission to make your dream come true.

Super 30 tells us the story of the dreamers, and a dream-maker.

Based on the real life story of Bihar’s Anand Kumar, Super 30 is about the power of hopeless dreams, and finding that special one who will try his damndest to make them come true.

It tells the story of a different kind of Dronacharya — one who lives in our midst and one who, unlike that guru to the royals, doesn’t ask for Eklavya’s thumb, but abandons the Pandavas and gathers all of Eklavya’s friends and begins to teach them.

The movie is entirely devoted to its hero, often at the cost of its story and other characters. It levitates him, while ignoring others. Yet, despite its several flaws, Super 30 takes off because it is powered by Anand’s own story that is an inspiring, heady, emotional mix of all that Indians hold very dear.

In a culture where education doesn’t just lift families out of poverty, but helps people transcend class and some of the barriers set up by caste, guru is treated as bhagwan.

And when this bhagwan sheds his royal, glitzy robes and role, walks out of a for-rich-kids-only institute and grabs the hands of the labourer’s daughter and a cleaner’s son — it’s a moment of such righteous piety that tears flow incessantly.

Super 30 is a emotional journey that is energised by the performance of Hrithik Roshan, who, despite the oodles of bronzer, gives a sublime performance.

Super 30’s story is told in flashback, by one of Anand Kumar’s students who has been accorded the honour of addressing an auditorium full of mostly white people.

“I am Phugga,” he says — “it means balloon,” while lightly disparaging India and its reputation.

A Third World country, a call centre nation that invented zero but then forgot how to count. A society where English creates a divide between the haves, and those they will ensure don’t have.

Addressing the audience in Hindi, he spirits them and us to 1996 Patna where Anand Kumar (Hrithik Roshan) has just won the gold medal in a mathematics competition. As Anand stands on the dias, enjoying the moment and listening to shiksha mantri Shriram Singh (Pankaj Tripathi), he is also mildly irked and distracted by the foreign journal that the runner-up is holding.

The son of a postman, Anand often travels by bus for several hours to a library at another college to solve puzzles in Cambridge University’s The Mathematical Gazette. Though this son of a postman (Virendra Saxena) and the cutest mom (played with charm and earthy warmth by Sadhana Singh) runs to show off his gold medal to Supriya (Mrunal Thakur), a delicate kathak dancer who goes to the local beauty parlour in her daddyji’s Mercedes, he also calculates and tells her that as per mathematics, she fails the beauty test.

Mathematics is Anand’s first love, and the film brings in the criminal apathy of politicians who, for immediate gratification and some taaliyan, throw promises like cheap change — promises on which pivot many hopeless dreams — to create the first hindrance in his pursuit of further studies.

Soon a tragedy and poverty force him to abandon that dream and instead sell papad on his father’s bicycle.

A chance meeting with Lallan Singh (Aditya Shrivastava), who runs the big local Excellence Coaching Centre and has a special place in his house for a painting of IIT that his centre feeds off and feeds into, changes that.

I want to make you the “master blaster of IIT-JEE”, Lallan says and hands Anand a wad of notes.

Overnight there’s a hardening of Anand’s eyes and smile and his self-effacing demeanour transforms. He now struts into the world, chest first.

As his mother moves from a chulha to a cylinder, and he begins to ride a bike to the institute, he also casually dismisses a boy who can’t afford the fee, but points at and asks another who can, “What do you want to do?”

Making others’ dreams come true makes Anand smug, superior, powerful till a meeting with a boy studying under a street lamp, in between his chores in a kitchen, take him back to his father’s words…

Anand quits his job and, with the help of his brother, sets up a coaching centre coaxed out of tin sheets, brick and sheer will to teach the Bholus of the world, free of cost, so that they can compete with the Rikkis of the world.

The introduction to his 30 students — scared but desperate to catch the coat tails of a promise of a future that till now they knew would remain a dream — is very filmy but moving because of the kids themselves.  But, brilliance that’s indifferent to fame or fortune irritates and gnaws at others, and they must try to either control or own it.

The confrontation and competition between Anand’s and Lallan’s students becomes the centrepiece of the rest of the film where death threats, attacks abound.

Raghunath Bhatt (Amid Sadh), a strange character who appears drunk and slightly unhinged, amounts to just one plot twist, but a silly staging of a scene from Sholay, involving Basanti and Gabbar, transforms into an enraged, determined scream of kids determined to break the wall meant to keep them down and out.

Though the real Anand Kumar’s life is a ready-made script, the fact that Super 30’s writers decided to bookend that story with Phugga’s speech is a mark of lazy writing and creative constipation.

Thankfully, they make up for that in the film’s dialogue, which are cool, funny, crackling.

Super 30 takes some creative inspiration from A Beautiful Mind and angry rappers, especially for some of its slick montages and songs. But it also has its own sweet, pulsing moments  moments with Anand’s mother, dad and girlfriend.

Mrunal Thakur is nice and has the film’s cutest dialogue. Sadhana Singh creates a warm home around a chullah while dispensing warm rotis. Pankaj Tripathi, Aditya Shrivastava are very good, and Virendra Saxena is the good daddy that he always is.

Roshan’s demeanour changes thrice in the film and in each one he is excellent. He creates a new kind of guru, another Dronacharya sometimes with a fleeting glimpse of frustration, sometimes eyes bright with hope, sometimes frozen into a dead, determined stare, sometimes welled up with joy.  Roshan carries Super 30 with a powerful and nuanced performance that’ll win him more than just all the popular awards.

Super 30 credits Vikas Bahl as the director, but it’s not quite clear who directed the film since Bahl was taken off the project after he was accused of sexual harassment by a former, junior colleague at Phantom Films and two actresses.

Hrithik Roshan wrote about it being “impossible” for him to work with Bahl after sexual harassment allegations, and there were reports that others, including, Kabir Khan were asked to step in to complete the film.

After Phantom Films shut shop, and the film’s new producers, Reliance, took charge, an in-house inquiry, set up at the behest of Bahl, recently “absolved” him of all charges. The inquiry into the charge of sexual harassment, conducted in the absence of the complainant and against her wishes, has since been questioned on several counts, including the proximity and connections of some panel members to Bahl.