In Gulabo Sitabo, Fatima Mahal is both, a character and the set it is the stage that carries, encases and showcases its cast of characters 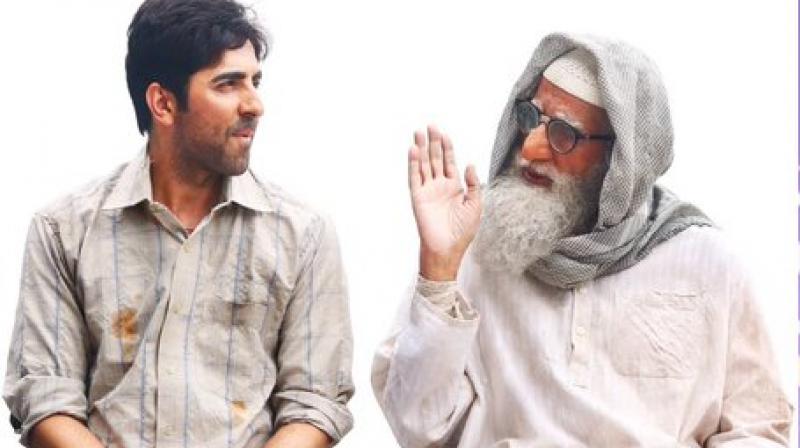 Written by Juhi Chaturvedi and directed by Shoojit Sircar, Gulabo Sitabo, which dropped on Amazon Prime on Friday, is an epic love story spanning several decades, upheavals and suitors.

It is set in present-day Lucknow, more specifically in Fatima Mahal, a large, palatial haveli whose small, humble main door gives way to a surprisingly grand and generous courtyard.

A broken, rusting fountainhead stands there, in a puddle of water, coaxing us to hark back to its past glory. From the first floor, balconies jut out, some still showing off their intricate grills, others crumbling, gaping.

In Gulabo Sitabo, Fatima Mahal is both, a character and the set  it is the stage that carries, encases and showcases its cast of characters, some of whom have been given rooms, while others have been allowed to take refuge in its crevices. It seems inanimate but it’s an impish beloved.

It controls the lives of its inmates and its own fate with a lot of whimsy.

That's why, perhaps, Mirza Chunnan Nawab (Amitabh Bachchan) has always been besotted with it.

Now 72, his pajama is pulled up above his ankles and his torso is hunched over as if he is in a perennial, hushed, secret conversation with Fatima Mahal about what they will do when they are one. To him, the whole world is conspiring to keep him and his beloved apart.

Mirza’s real, legal connection with the haveli is not clear, but what's apparent in his stooped musculature is a life-time of devotion, a love so desperate and complete that he could never really live life except in a state of constant yearning for the day Fatima Mahal would be his, just his.

Mirza’s daily routine, thus, is a dogged pursuit of survival for the sake of owning the haveli, to outlive its only other claimant.

A portion of the haveli’s first floor is regarded by all its other inmates as “Private Property” mostly left alone. When they have to, they approach it with tiptoed deference. It is occupied by the sassy and sharp-tongued Begun (Farrukh Jaffar) and her attendant, Dulhan.

Begum Fatto’s hair is covered with henna regularly as she sits in the courtyard recalling episodes from her life. Most memories have faded, but some have stayed fresh, as if it were just yesterday that Nehruji came visiting.

Mirza lives on the small change that Begum throws his way and supplements his pocket money by selling stuff he steals from the tenants, sometimes even stripping the haveli of its prized ornaments.

In between chatting with his only friend, Pandeyji (Shri Prakash Bajpai) on the occasional outing, Mirza spends most of his day chasing tenants for rent as he paces the corridors of the haveli snapping at light bulbs that are switched on and contemplating Begum’s janaaza.

While most tenants pay, no threat or humiliation can make Baankey Rastogi (Ayushmann Khurrana) part with the merger, monthly Rs 30 rent.

Baankey lives in a sulk with his mildly protruding belly, mother, three sisters Payal, Neetu and Guddo (Srishti Shrivastava), the fiery one who is in college.

He has a lisp and has been working at his father’s atta chakki since Class 6. There he sometimes conducts an afternoon affair with an irritated Fauzia.

The address, Fatima Mahal, is all that Baankey has to show for his life. It’s both, his desperation and his swag, and so he clings to it as his own.

Every time Baankey dodges paying the rent, Mirza ups the ante. He steals, harasses, insults, fights, stalks, and on one occasion drags Baankey to a police station.

Their argument attracts the attention and guile of “Archeology” Ghanshyam Shukla (Vijay Raaz) and, soon, Pandeyji’s lawyer pal, Christopher Clarke (Brijendra Kala) each one leading to a new cast of characters whose eyes widen with glee at the thought of getting Fatima Mahal.

Meanwhile, in a conversation between Mirza and Begun about who in the family may still be living, old memories and one Abdul Rehman get resurrected.
As vultures begin to circle and Gulabo Sitabo hurtles towards two possible disasters, a deep sadness engulfed me.

Despite Mirza’s malevolence, and the fact that he covets what’s not his, there is a pitiable innocence to him. He believes what he hears and begins to trust men and women he must not. And then, of course, there is his true, affecting, all-consuming love.

Gulabo Sitabo spends a lot of time listening to Baankey and Mirza fight and bandy the choicest insults. The film enjoys their banter, but its main interest is the love story of Mirza and the haveli.

The film lives with Mirza. It walks behind him, watches him, accompanies him, breaking away only briefly, occasionally, to drop in on others and for a bit of afternoon sex.

Director Shoojit Sircar is great at putting script to screen, and he is particularly good at putting together a stellar team.

Shot on various locations in Lucknow and Mahmudabad Palace in Qaiserbagh, among others, the Fatima haveli itself is captured as if its air, heavy with memories, has a mild, moody chill.

Shantanu Moitra, Abhishek Arora and Anuj Garg have created the film's music. Gulabo Sitabo's songs are peppy, but it's the background score, which is constant, that is often like Fatima Mahal's naughty accomplice sent to spy on Mirza.

It chuckles at times, and sometimes breaks into a happy jig, as if ventriloquising Fatima Mahal's feelings.

The star of Gulabo Sitabo, however, is Juhi Chaturvedi, whose writing has always been stunning, delightful (Vicky Donor, Piku), and now her imagination has caught up with it.

Juhi has written the story, screenplay and dialogue for the film which draws its quirky title from a nostalgic past that the film romances.

Gulabo Sitabo treats us to glorious, forgotten words like tutpunjiya, ull-jalull words that belong to a charmed world where even slights were cultured  and its story reminded me of those unforgettable short stories, often set in a quaint European city stories about love, greed and the hubris of fate that carries a sting in its tail.

Gulabo Sitabo's middle flops a bit, especially the tangent on which Vijay Raaz takes us, and its last sequence is a bit meh. It reminded me of the tacky end to Shoojit and Juhi's otherwise fabulous Vicky Donor (2012) where all the sperm children turn up for a garden party.

But these are minor flaws in a story that is written with the skill and sleight of the hand of writers who don't just conjure a world, but also invest it with an intrinsic worldview, a belief system of what life is.

Juhi’s worldview is fabulously feminist and wryly ironical, and Gulabo Sitabo is marinated in it. And Juhi’s characters layered, complex, memorable are assigned to an excellent, inspired ensemble of actors.

Farrukh Jaffar brings an inherent natkhat-pan and joy to Begum that keeps returning even after Mirza sucks it away with his actions.

Ayushmman Khurrana, who has honed the garrulous act into his own reliable trademark, is very good here, and he and Bachchan bounce off each other like skilled trapeze artists. Srishti Shrivastava, who plays Guddo, however is a real discovery. She is simply crackling.

Pia Cornelius’ prosthetics are remarkable, and they do more than just give Amitabh Bachchan's Mirza a rather large nose. They cover the familiar face of the star, allowing the actor to emerge.

Though his Mirza is never evil, Amitabh Bachchan embraces the character's inner and outer ugliness with an actor’s humility and the confidence of a thespian who knows how much the camera loves him. All best actor awards may be posted to Jalsa, Juhu.

Like Fatima Mahal, that has withstood the travails of time and men, so will Gulabo Sitabo.

The film is a classic, a gem. Much like those childhood stories we never tire of, it will remain a charming, alluring world that audiences will repeatedly step into  world of the dusty, crumbling, peeling but majestic Fatima Mahal, where baby bakris skip about, an old, hunched, crabby man will do anything to have her, but the haughty haveli, like the women it cradles near and far, will chart her own destiny.