Chadha can’t do much with an underwritten role. 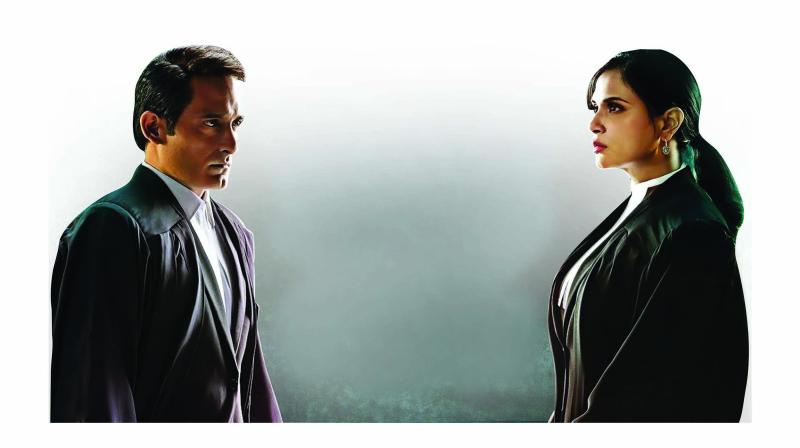 Section 375 is the kind of film that has an element of a thriller as well as making you involve yourself in the two-hour long drama that unfolds before you.
Rating:

Our legal system, often getting trapped between fairness, moral rightness, and what is stated and defined in the statute books, including all rights, both natural and legal, makes every attorney, judge and legislator caught in a dilemma between law and justice. And so, many victims and law enforcers argue that justice fails them. Or vice versa.

In the wake of the #MeToo movement in India, while debates continue to rage as swiftly as they tend to ebb, not much empathy seems to be directed towards the sufferers of rape, both socially and legally. Only because either other burning issues take precedence every week, or the manipulating accused use their influence and power to sway the judgment hovering over them in their favour. The result is, of course, delayed, and thus, denied in most cases. Evaluating the merits and demerits of a film based on such a subject too, is therefore, not a conclusive verdict. More so, since the Ajay Behl-directed Section 375 — though it starts off as a taut screenplay in the first half — tends to play safe and present a side that is clearly a contrarian point of view. So while one may welcome the timely release of such a film, it is obvious that it also presents a perspective that safely shields perpetrators of such crimes too.

When a well-known and authoritative film director Rohan Khurana (Rahul Bhat) gets accused of raping a junior costume designer he was working with, Anjali Dangle (Meera Chopra), he uses every familiar tactic to get exonerated by the law. But to no avail, as all forensic evidence and the victim’s statement unmistakably position it as “rape”, and even the sessions court holds the same view and pronounces him guilty as per the law, and Rohan gets convicted.

Now, here’s the twist, not a spoiler. Despite all evidence pointing towards his guilt, and for which he gets 10 years of rigorous imprisonment, Rohan tries to convince his wife Kainaaz (Shriswara) about his innocence.

Enter high profile hotshot lawyer Tarun Saluja (Akshaye Khanna) who, despite knowing the facts of the case, agrees to defend Rohan, on Kainaaz’s request. He has his justification in place: He defends the rich accused for a hefty fee to fund and support the pro bono cases of the less privileged survivors he represents and stands up for.

Does he then believe that Rohan may not be innocent? We get to know as the film moves on.

And, thus, a trial begins between the state of Maharashtra and Rohan Khurana, with one of Tarun’s juniors he had trained, Hiral Gandhi (Richa Chadha), as the public prosecutor.

As expected in a film whose primary theme is about justice and law, the rest of the film is set in court under the judges Justice Mudgaonkar (Kishore Kadam) and Krutika Desai. As arguments begin, Tarun’s attempts at proving his client Rohan innocent gain ground when he makes mincemeat of Hiral’s arguments, and bares many of Anjali’s claims as false. Tarun also has his way since prosecutor Hiral presents a view that is straight out of a law book with little room for logic sustaining her arguments. On the face of it, the case turns out to be too good to be true and takes a sinister turn when as the film progresses, each time a new layer seems to get unearthed.

With Hiral looking studiously skillful, it is up to Tarun to dig out factually correct details to reveal what lies beneath every apparent crime scene. Tarun goes deeper into every aspect of the crime and the crime scene — from what intent and at what time did Anjali visit Rohan’s apartment to what happened between them. Viewers too, get the thrill of viewing — and guessing and weighing — the crime from more than two standpoints as the court witnesses the alleged crime from Rohan’s, then Anjali’s and also from both the lawyers’ viewpoints.

In the opening scene of the film, the male protagonist in the film seen addressing a conference for young law students talks about the undefined neutral ground that law eventually assumes when both justice and law are interminably linked but neither serves any clarity even when handed out and performed. The title of the film Section 375 taken from the Indian Penal Code defines rape as a criminal offence and states that a man is said to commit rape when he has sexual intercourse with a woman against her or without her consent or if she is a minor. It alludes to the infamous Shiny Ahuja case, among others like the 2012 Nirbhaya incident, and the recent #MeToo movement led by film actresses in Mumbai.

Section 375 is the kind of film that has an element of a thriller as well as making you involve yourself in the two-hour long drama that unfolds before you. It has its subtleties, and invites us to think, not only about justice and the law but also about guilt and complicity. That it also gives us a skewed perception of the rapist or the victim’s powerless rage is a derivative that viewers leave the theatre with.

That is not to say that the film has no flaws. The legal issues are foggy and remain unexplained. Khanna solving the mystery of his client’s innocence is sudden and sounds facile. The comparison is not well drawn.

Chadha can’t do much with an underwritten role. She looks unconvincing standing up to Rohan’s defence. At one point, he even chides her with having a “bachkana” (kiddish) attitude when she is furiously belligerent in court.

As a lawyer, Khanna plays a somewhat idealistic yet opportunistic defence lawyer for whom the difference between right and wrong is clear but he still wants to work for money. But it would do some of these actors a world of good had they really seen or attended a few of our court proceedings. He is a good actor. In fact, he has been very good too in the past. But here, the fearless swagger — and his less respectful stance in court before the judges — and the self-assuredness with which Khanna essays his role may be valiant, but too filmi. Merely by prefixing “Your Honour” or “Honourable” before the judges in their arguments cannot absolve him of his contempt of court. Imagine if all defence counsels were to use the tone, attitude and bluster with which he flamboyantly preens and goes about his daily routine job, our courtrooms would actually have dramas.

Kadam and Desai as judges acquit themselves well. Wish Meera Chopra had more spunk and less deadpan expression for a film director of repute to be charmed by her!