Salman Khan films these days don’t even qualify as films, in the sense that they are not even moving images 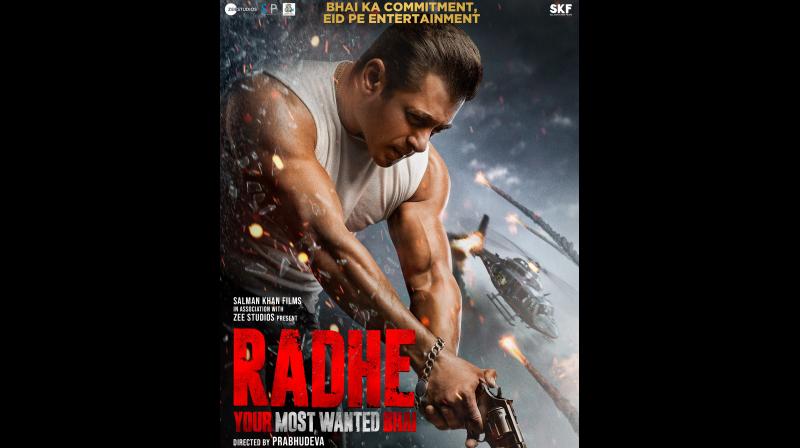 Radhe: Your Most Wanted Bhai

Radhe is allegedly an official remake of the 2017 South Korean film, The Outlaws. This means that we could sit with both the films and play “spot the difference” till the end of time. But what’s the point?

No Salman Khan film before and since Dabaang (2010) and Bajrangi Bhaijaan (2015) has really had a point except to treat India's legions of Salman-esque man-babies to how "bhai" shaves, dances, kicks and flexes.

In fact, Salman Khan films these days don’t even qualify as films, in the sense that they are not even moving images. They are simply a collage of snapshots of him posing in high heels which his pants try to hide by splitting at the bottom and flaring out.

It’s one thing to suspend disbelief for the sake of a story, characters, a world conjured up. It’s quite another for us to have to also pretend that Salman Khan is tall, that he can move, and that he is a young man and not a 55-year-old first-in-line for the Covid vaccine.

The Salman Khan universe is always pivoted on imagined masculine physical power, prowess, speed and moral courage where he is the good guy up against bad guys. And this is the plot of Radhe.

The Outlaws was about a group of cops. But here, as in most Salman films, no one else matters except him. That is because his Radhe has superpowers that even Superman, Spiderman, Shaktiman haven’t yet harnessed.

Radhe is no ordinary cop. He is an encounter specialist on suspension, and yet when the menace of drugs and suicides spreads through the schools and colleges of Mumbai, it is he that the commissioner of police turns to for help.

Because even when he is off duty, Radhe flies into the high-rise apartment of a bad guy who has raped and killed a girl. Why he couldn’t get there earlier and save the girl is not disclosed. But then, that’s not the point of this scene. This scene is meant to inspire The Matrix people.

Radhe, you see, is so fast that he’s not even a blur. People he attacks and even kills are not even aware that they have been attacked till they find themselves bleeding or dead. But since some people need to see and process how lethal he is, Radhe kills everyone and then proceeds to show the main bad guy a replay of how he did it.

Director Prabhu Deva's Radhe is like that horrible “I’ve Mixed Everything That Was Leftover” dish which Mummyjis are given to cooking every few months.

The film can’t even come up with a single whistle-worthy dialogue and uses that old “Ek baar jo main commitment karta hoon...” line over and over.

Even the supporting characters are like zombies who have risen from Salman’s previous tacky films. As if, upon hearing that Salman is making another film, they crawled out of those films and arrived on the sets of Radhe. They do here what they did then.

Radhe's official world is made up of minions who are devoted bhakts and his bosses are either corrupt or bumbling fools. ACP Avinash Abhyankar (Jackie Shroff) is a moron who gets to wear a silk maroon dress and show-off his waxed legs.

The wider world is made up of a good, old Muslim man who is a mute, moral approver, a young kid who wants to catch the bad guys, and several women who either get raped, killed or beaten. Except for the one Salman is romantically inclined towards, of course.

Salman Khan could never really act and for a while now he has stopped moving as well. Throughout Radhe, Salman carries a fixed expression, as if he sent his wax statue to the shoot and everyone around had to pretend it was the real thing.

So directors, choreographers and fight masters have to make him stand in poses that can be joined together later, on the editor’s screen, to insinuate movement .

This means that we get several stills of him: The pinky-lipped pout, eyes crinkled to project smoldering, Salman standing with feet shoulder distance apart and arms making round brackets around his torso. Sometimes, after beating the bad guys, he   hooks his jacket to his index finger and flings it on his back. There are also several shots of him holding his belt buckle or hands in his pant pocket. All these call attention to his manhood which, unfortunately, is shy and whimpering when it comes to having any meaningful contact — romance, chemistry — with any actress.

Since Salman Khan went bonkers over a girl in the 2003 Tere Naam, he has been a reluctant suitor. So it’s the women who must prance around him like dizzy squirrels in short skirts. These women are shapely, much younger do-gooders who, when not simpering or dancing, are helping others. When they are dancing they take his hand and place it on their waist or present their booties for him to do a gentle tabla thing on it.

In Radhe, Disha Patani’s name is Diya. Since she is always in shorts and skirts, she gets told off about her clothes, Baddi Ammi style. But there is that mandatory bare torso scene of Salman for his fans to swoon over.

In Radhe, Salman doesn’t just show us a six-pack torso (hello, CGI), but attention is also called to his ample man-boobs which twitch in a rather creepy way at the sight of Ms Diya.

The main bad guy in Radhe is Rana (Randeep Hooda) whose shoulder length hair is annoying.

Rana doesn’t seem to have or want a life. He stays in an abandoned mill and with his two men eats out of aluminium takeaway containers. Sometimes the sweet people who send him food also send him thermocol plates.

Rana doesn’t inspire much love for a life of crime. And just a video of his sad life would have been enough to deter future criminals. But since Salman Khan films are a sequence of dances and fights, he goes after Rana.

In Radhe, Salman doesn’t just beat up all the bad guys, he converts some into duffle bags and even sends a flying knife into a goon’s half-eaten Batata Vada and pins it to a wall.

At the end he jumps out of an SUV and flies into an airborne helicopter. It all ends with a dance where Salman barely moves and Disha Patani overcompensates with worrying pelvic thrusts.

What is more worrying, however, is that two very loved men of our film fraternity — Salman Khan and Prabhu Deva — think it is okay to peddle this imbecility as a film.

PS: A joke has been doing the rounds on WhatsApp about Radhe:

“You guys don't know him, but I have a friend who has been on a wheelchair most of his life. And today he stood up to switch off the TV while watching Radhe.”

I just want to know at what point he stood up from the wheelchair. I want to frame that scene.