The film’s main story — of a boy and a girl — is rather dull for a long time, and comes alive right at the end. 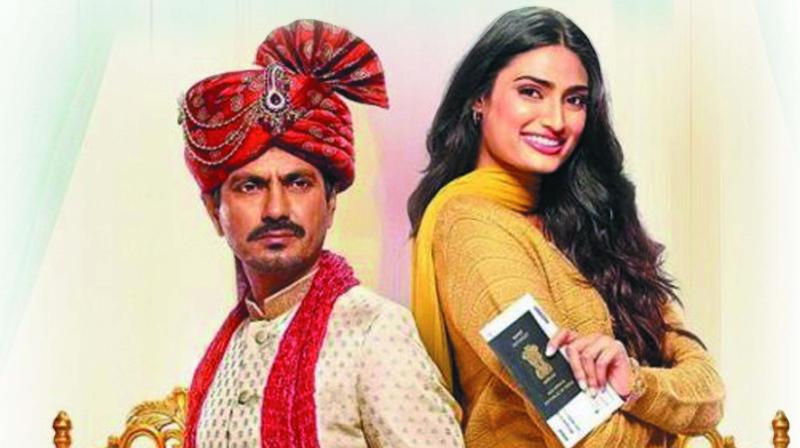 The story of Motichoor Chaknachoor is simple but its plot is full of gentle little twists and turns that surprise, delight and take the film in unexpected directions.
Rating:

Name me an Indian family that doesn’t have a shaadi ki story and a dahej grouse to narrate and I will ask Dharti Ma to split and swallow me.

Motichoor Chaknachoor, directed by Debamitra Biswal, is a love story that involves a tug-of-war between a lalchi (greedy) mummyji after dahej and an unscrupulous, spoilt girl who is seeking a groom to settle abroad.

The film has a small town quality to it which it gets that from the banter of its female characters, and the nashta of many fried items that everyone is having all the time.

In Bhopal, MP, live the Awasthis, a family of three squabbling women and a quiet man. On the other side of their knee-high boundary wall are the Tiwaris.

Mausi, who is mostly in a nighty, is unmarried and unrepentant. Her jiji (elder sister) keeps bringing up the 27 prospective grooms she rejected every time Annie rejects a boy.

Jiji keeps accusing mausi of trying to create a club of unmarried women, a sort of gang of avivaahit mahilas, except that Annie is really desperate to marry, but only if the groom lives abroad. That’s her ambition. That’s her dream. That’s the one thing she wants from life.

She will marry anyone as long as they are settled in London, Canada... Even Dubai, Nepal...

Indu Tiwari has a son, Pushpinder (Nawazudin Siddique), who works abroad. An accountant who is introduced by his mother as a chartered accountant settled in Dubai.

Boys come to see Annie and she rejects them the moment they talk of moving back, not taking her abroad… Pushpinder is 36-years-old and has been going around to see girls for seven years, but his mother keeps rejecting them because of failed dahej negotiations. He’s desperate to get married, to have sex. She’s desperate for a visa in her passport…

The story of Motichoor Chaknachoor is simple but its plot is full of gentle little twists and turns that surprise, delight and take the film in unexpected directions.

The film’s main story — of a boy and a girl — is rather dull for a long time, and comes alive right at the end. Yet their story, and the film, is made exciting and entertaining and because of the mummys, daddys, bhuas, behens, mausi involved. It’s their aspirations, feelings attached to Annie and Pushpinder’s lives and choices that give the film a pulsating heart.

Motichoor Chaknachoor has a very authentic small-town vibe that it gets from the setting, the clothes everyone wears, schemes and scenes where neighbours borrow cars, and plates of samosas, kachoris, jalebis that are passed around, but mostly from the women’s voices, concerns, meltdowns. They create and manage tensions in the middle of busy domesticity, while delivering taunt-laced insults with that uniquely desi apnapan.

All the women are good, but Vibha Chibber, Navni Parihar and Karuna Pandey speak so fast and fabulous that I feel I need to watch the film again to catch stuff I missed.

In the middle of all the banter, the film shows the normalcy of demands of dahej because of its cyclic nature — brother’s dahej will be used to marry off the sister — and inserts a very poignant scene when a girl’s father, almost shamefacedly, offers money to the groom, hoping that it’ll be accepted as a favour to him.

This shame of Indian families is very nicely captured in a moving scene.

The film also usurps relations and resets power equations, like when the angry saas and bahu conspire together.

But it’s the film’s dialogues, superb and often raunchy, that stay with you. Like mausi’s advice to Annie on her suhag raat, when she calls to complain of her inability to conjure any carnal or romantic feelings — “just close your eyes and think of Burj Khalifa”. I fell off laughing.

Athiya, who made a very disturbing debut in Hero (2015), has really come into her own here. She holds on to a tough MP Hindi dialect throughout the film and despite Nawazuddin’s very apparent reluctance, tries to forge some chemistry.

For most of the film, Nawazuddin seems quite out of it, as if he decided to give the film and his role just 20 per cent.

That makes Athiya’s job harder, and yet she carries the film, succeeding in selling us this very odd, awkward pair.