Batla House movie review: If only it were about the encounter

This could have been made slightly palatable if the film were intelligent, well-made and thrilling. 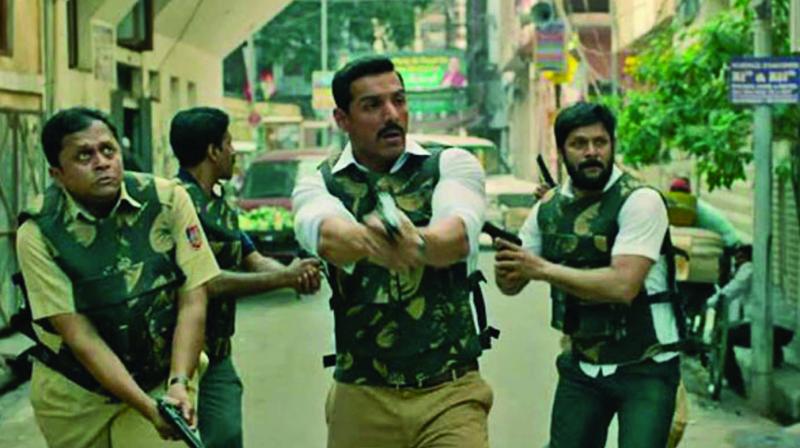 Batla House is neither well-made nor thrilling.
Rating:

It is not usually a film reviewer’s job to do a fact check on a film purportedly based on true events, or to have to sift fact from fiction. But, in this age of fake stories and blatant lies, a time in our country’s history when every flat surface and piece of technology is being used for propaganda, this is asking for too much. It is a bit a precious to expect politics and life to play itself out without touching popular culture, especially films.

That won’t happen, and it never does, especially not in India where cinema, through sponsorship and censorship, has always been used as a tool to sell morality, political ideas and ideals, instil patriotic pride, and reinstate patriarchy — every single time it feels like some women and events may have shaken it a bit.

Our cinema has sold us Socialism, labour rights, animal protection through ichcha-dhari nagins. It has also, of course, taught us how to romance, but while doing so it has always reiterated the Lakshman rekha which girls, especially, must not cross. And it has shown us how the skies roar and lightning strikes when they do.

It has also often told us that vigilantism is good. The message always being that as long as you are convinced you stand with the good and you think the world is spinning out of control because of a few bad men and women, what’s a little violence, what’s a little lawlessness as long as it’s for the greater good.

And now, for the last three years especially, our cinema has been in the craven service of the political party in power, giving sharp shape and form to its agenda, selling its theories, dissing its political enemies, celebrating its victories, adding to the growing cult around its supreme leader.

We’ve been treated to the revolution of the indoor shauchalay (Toilet: Ek Prem Katha), told how dictatorial and corrupt Indira Gandhi was (Indu Sarkar), how ineffectual Dr Manmohan Singh was (The Accidental Prime Minister), how Lal Bahadur Shastri was murdered at the behest of a Congress leader (Tashkent Files). And in between all this we have been treated to movies about India’s glory, past and present — at the Olympics (Gold), while fighting for the British (Kesari), fighting the British (Manikarnika), surgical strikes (Uri), creation of cheap sanitary napkins (Pad Man). And because in India we don’t do subtle, we’ve even had a movie called PM Narendra Modi starring Vivek Oberoi.

And now we have Batla House, a film which announces at the onset that it is inspired by the Delhi Police and the facts of the 2008 Batla House encounter, but it doesn’t take any sides. It does exactly that.

Police encounters make for thrilling films. But Batla House is not an encounter film. It is, in fact, not really interested in the encounter. It is wholly and solely devoted to upholding the honour of Delhi Police and to pound in the message that certain political parties have always nurtured their vote bank by trying to protect terrorists from a certain kaum at the cost of the nation.

This could have been made slightly palatable if the film were intelligent, well-made and thrilling.

Batla House is neither well-made nor thrilling. It has a morose pace that’s in step with its sulky hero, and it is the exact opposite of intelligent.

Batla House’s screenplay is so inept and daft, completely lacking any sense of cinema, that if you were to close your eyes and just listen to the painfully expository dialogue, often accompanied by a terribly didactic background score, you won’t have missed anything. In fact, you may be better off as suffering John Abraham’s one expression for over two hours does put a deep frown in your forehead.

Batla House, directed by Nikhil Advani, presents the Delhi Police’s version as the truth, and then spends all its time refuting what has already been refuted, all the while insisting that its intent is not to influence opinion.

According to the official version, a Delhi Police team was keeping an eye on Indian Mujahideen terrorists who they thought were responsible for the serial blasts in Delhi on September 13, 2008. But six days later, on September 19, what was to be an intelligence gathering visit turned into an encounter in which two terrorists and Inspector Mohan Chand Sharma were killed. Two terrorists escaped and one was nabbed.

The encounter, in Delhi’s Jamia Nagar, led to protests which initially spoke of the dead terrorists being innocent students, and later of dubious bullet wounds. There was also talk of Inspector Sharma being killed by his colleagues because of internal politics.

The case, and the controversy around it, was laid to rest by the NHRC and the courts, which said that it was not a fake encounter. The matter rests there.

Batla House doesn’t present anything new or revelatory. Instead it embellishes the events and its agenda by placing at the centre one ACP Sanjay Kumar (John Abraham), when no such character existed in real life.

We first meet the ACP at home where his wife, Nandita (Mrunal Thakur), a TV anchor, is saying she is fed up with having a husband only in name and threatens to leave him. He responds by saying that it’s a very good idea. Now, this may seem like jerk behaviour to some, but the film portrays this as the ACP’s complete devotion to his job, i.e. of cleaning the country of terrorists.

Soon, the encounter takes place and the film immediately creates three separate entities — the honourable cops, the terrorists and activists/politicians with agendas to grind. The sulky ACP is burdened with the task of exposing these politicians and activists. The film mostly shows us one activist, a Delhi-type woman wearing silver jewellery, kajal, with her nostrils perennially flared. It also shows us real footage of Digvijaya Singh asking for the cops to be punished, and hints at protests organised by the Samajwadi Party.

Batla House is so devoted to telling us how impacted the maligned cops of Delhi Police were that ACP Sanjay Kumar, who gets shot in the chest during the encounter but is saved by a bullet-proof jacket, keeps imagining being shot again and again, and freezing. PTSD, it seems.

But given that he lost a dear colleague (Inspector K.K. Verma played by Ravi Kishan), I found this a tad self-indulgent. But again, the film uses the cop’s trauma only to shame the insensitive activists.

While we get brief glimpses of the encounter through the ACP’s testimony in court, the film also shows us how, while interrogating the captured terrorist, the ACP exonerated Islam but added that several Indian Muslims have been brainwashed and taken to terrorism.

Despite this Batla House remains at pains to tell us that it takes no sides. It even puts out text in the middle of the film to reiterate that. But its bias bursts out when ACP Sanjay Kumar speaks of “in ki kaum…” in his testimony.

There were any number of police encounters — fake and otherwise — to pick from. That the producers and director of Batla House picked this one is telling. That’s because this sort of divisive political messaging about a certain kaum, which has been at the receiving end for the last five years, sits easy in this particular case.

At some point towards the end of the film, the ACP and his team start pursuing the escaped terrorists, one of whom is eventually nabbed in a sequence that is mildly tense and exciting.

Mrunal Thakur is terribly inept. In a serious scene, where she is supposedly dying of tension as her husband is at an encounter scene and she is calling to check if he is dead or alive, she bounces about to show off her curls.