Mission Mangal opens on a rushed morning in a middle class household run by a multi-tasking Tara Shinde (Vidya Balan). 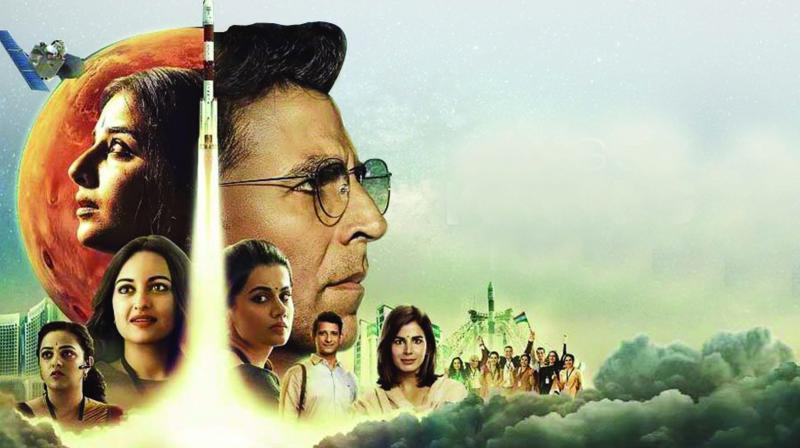 Mission Mangal is written by R. Balki, most recently the director of Pad Man.
Rating:

Mission Mangal opens on a rushed morning in a middle class household run by a multi-tasking Tara Shinde (Vidya Balan). There’s her husband Sunil (Sanjay Kapoor), son Dilip (Rohan Joshi) and daughter Anya (Kashmira Paradeshi) to be taken care of, as well as breakfast to be made, a saree to be ironed, bills to be payed…

It’s a check-list of sorts before these varied parts of the Shinde parivaar can take off, much like Isro’s GSLV Fat Boy is trying to do at Sriharikota.

While Tara’s Mission Morning Send-Off is a success, Rakesh Dhawan’s (Akshay Kumar) Fat Boy blows up in his face.

His teammate and scientist colleague Tara is crestfallen, but Rakesh hums a Bollywood song, treating the failure as a lesson learnt.

Director Jagan Shakti’s Mission Mangal, based on the real-life story of India’s cheap-as-hell mission to Mars, doesn’t just tell the story of India’s ingenuity and genius in being the only country to succeed in its first attempt to reach Mangal grah, but also puts warm, sweet, smart females inside Isro to make the “sciency”, head-spinning stuff about rockets and how they get up there accessible, if “stupidified”.

Mission Mangal takes a peek behind the photographs of women in Kanjivaram sarees and gajras celebrating the success of Mangalyaan (or the Mars Orbiter Mission — MOM) which emerged on September 24, 2014, the day Isro successfully put a satellite into orbit around Mars. The photographs bust the myth of space science being a men’s only club. And the film, by putting women at the centre of it all, complete with their life’s complications, ambitions, martial issues, duties as wife, mother, all the while keeping their savvy in the complicated world of rocket science intact, places young Indian girls’ spacey aspirations into Isro’s orbit.

But, since Mission Mangal comes at a time when Bollywood itself is on a mission to mould Gandhi-Nehru-Ambedkar’s India into a “New India” whose chest must always be puffed up and red-tilak face be glowing with pride, the film, apart from being inspirational and nationalistic, is also devoted to eulogising the current incumbent.

Former Prime Minister Dr Manmohan Singh signed off the Mission to Mars in 2012, and the rocket took off during his tenure, in 2013. But it was PM Narendra Modi who got to celebrate its arrival in Mars orbit, on live television.

The film pays an extended homage to Mr Modi, Dr A.P.J. Abdul Kalam, Isro’s first chairman Vikram Sarabhai, even its second chairman Satish Dhawan (through the hero’s surname), but doesn’t mention either Jawaharlal Nehru, the Prime Minister who set up Isro, or Dr Singh. And in that erasure lies the unconscionable, barbarous and flimsy foundation of the “New India” under construction that more and more Bollywood actors and directors are keen on contributing to.

Mission Mangal is written by R. Balki, most recently the director of Pad Man. And under his aegis, the failed Fat Boy mission means that Rakesh, despite the loving indulgence of Isro’s director (Vikram Gokhale), is replaced by Mr Rupert Desai (Dalip Tahil), an accented desi who is a Nasa fan.

The “Mr” prefix is repeated often to convey that Bhai Rupert is no scientist, and the film uses his character merely as a plot ploy — Mr Rupert is the amalgamation of all the negative, pessimistic, discouraging voices that lack faith in India and Indian dimag-plus-jugaad.

In between explanations for dummies about how a rocket takes off carrying a satellite, we get some gharelu crisis situations of Rakesh’s teammates, especially Tara’s. As Sunil hyperventilates about his wife being too busy and their children going to various varieties of hell, planetary movements push forward the launch of Mars Mission by several months.

Now the 780 million-kilometre journey to survey Mars’ geology and atmosphere has to be put together in half the time and on half the initial budget.

We are often told that Nasa’s MAVEN Mars project cost 10 times more and took three times longer, and nationalism is invoked repeatedly — mostly by Rakesh, who also has a hissy fit every time he hears the word “impossible”.

In this sasta and tikkau mission, all scientific solutions come from gharelu events and things in which fried puris take the pride of place. In fact, whenever there is glitch, a bump in the road, dimag ki battis get jalaoed not by not some precedent or research, but things in the kitchen, even cushion covers. By doing this, the film tries to keep the science light and as less as possible. Instead we get many silly songs and spend time with characters in their personal spaces.

A baby gets born, a virgin scientist finds a beau, a woman finds a loving home, a family bonds, Mr Rupert continues to mock till he is shamed by an Indian satellite orbiting Mars.

Akshay Kumar’s character here has a touch of APJ — unmarried, musically inclined and devoted to space missions and India’s place in the world of space conquerors — and is required to do little apart from invoke desh and desh bhakti.

That’s not a bad idea, actually, because whenever he is mouthing scientific stuff he sounds like a particularly dumb arts student is trying to impersonate a science teacher.

In the name of acting he simply pulls his face into an expression that is mostly irrelevant to the scene, and seems to be saying, “I am a star, this is the expression I am going to give here. You make the connect between this and the scene.”

He stands out in two scenes — once, when in true Akshay Kumar style, he slides across a conference table to ambush a naysayer, and when he sits out a fight that he had set off.

The film’s cinematography, editing and the art direction — which together create a control room with several screens that look newly bought but important — contribute immensely to making us believe, as do the film’s female characters. They are all very good, especially Vidya Balan who really does come across as a scientist juggling space missions and a cantankerous husband.

Sharman Joshi is cute but does no sciency thing, while H.G. Dattatreya, with his repeated requests for chai, feels real.

How aligned Bollywood is these days to the political agenda of the government in Delhi is all too apparent in Mission Mangal, and not just in the erasure of certain politicians, but also in what it decides to show.

While one Hindu girl’s husband is a fauji devoted to desh seva, and the other’s is devoted to her and their marriage, the Muslim woman’s husband has abandoned her.

We should expect a bountiful crop of films on talaq, talaq, talaq from Bollywood very soon.