Yes, wonderfully designed sets or grasping nature through the lens does look captivating. 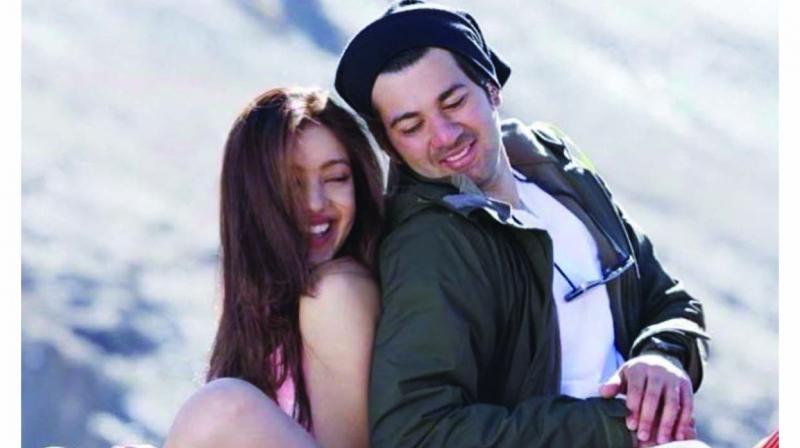 We all love snow capped mountains, breathtaking locales and state-of-the-art cameras capturing every bit of the scenic beauty exquisitely ensconced in the lap of nature. Don’t we? We also love watching good looking stars serenading or romancing in their finest clothes and sometimes, singing songs too. Hindi films, in particular, have seldom forgotten to add nature without its fury into long sagas where each scene becomes almost a character in the movie.

Yes, wonderfully designed sets or grasping nature through the lens does look captivating. Would you then also keep gazing at the screen for more than an hour where nothing but a lazy screenplay languorously moves ahead with a boy and a girl first meeting, them (expectedly quarrelling) and eventually falling for each other’s charms? We forgot a storyline that would pique your interest and keep you alive.

Reminding you of his dad, Karan Deol looks camera shy and ill at ease, not just while shaking a leg but in delivering simple lines too. Father Deol must have realised his genetic influence on his son and gives him almost the same set of an emotive range to play around with. Looking as awkward and unsure of his own self as his dad did some three decades ago (in fact papa Deol has not been able to shed his all thumbs style to date in many films), Karan struggles to stay afloat enacting romantic scenes, or reacting to dialogues in crucial scenes where his emotions are blown up on screen for all of us to take note of. After all, it’s family business that has given him such a major break!

But those of us who know that for Bollywood actors, it is the territories across India that prove to be their real targets where nearly the entire state worships them and would go to any lengths to ensure a long run for their favourite stars’ movies. North India, in general, and Punjab in particular, might just lap up this Deol offering.

Karan Sehgal (Karan Deol) is an orphan who has not been able to obliterate his photographer mother from his memory even as a grown up owner of a resort. His job as a trek guide makes him stay close to nature in whose lap his mom died in an avalanche when he was barely 10 years old. His mother’s dream to click a snow leopard remains his dream as he runs his own trekking company guiding tourists and adventure sports lovers. A pro at organising trekking tours, he is much in demand and comes in contact with a number of adventure loving young men and women. He also ferries tourists in his jeep or gives them a chopper ride through cliffs and inclement waters. That is when he is sharing dinner with them or camping.

Dilliwali shehar blogger Saher Sethi (Sahher Bambba) and her boyfriend (Akash Ahuja) have given each other a break and she decides to go on a solo trip to Manali. After getting a go ahead from her parents (Sachin Khedekar and Simone Singh) and grandmother (Kamini Khanna) whose chaheti (favourite) she is, she takes off.

Sparks fly when she comes to his camp purely with the intention of giving the place a bad review for its exorbitant prices.

No point getting into details for the second half of the movie. The rest of it is such that you wish the film had ended at the interval itself. Family drama ensues and both the lovers, after a bit of misunderstanding, lead themselves to a predictable climax.

The first half gives us a satiating view of the Himalayas, taking each frame to be soaked in by viewers, but fails to give them any moments to help them invest themselves in a nearly three-hour-long film. When the oh-too-familiar and tirelessly stale trope plods towards its excessively long runtime, you wonder how such veterans could overlook basic necessities in a film. More so in this day and age, with so much competition all around.

Papa Dharmendra, whose 50 odd years in the film industry have earned him the universal appellation “Dharma Paaji”, could have tutored his grandson on how to face the camera with confidence, if not given acting lessons. The boy is so dull and so hesitant in each scene that he gives the impression that the whole film is tentative. Bambba, who fares much better, gets no support from her co-star and ends up looking half-hearted and indecisive too.

The poor scripting of two debutants’ film is another area that the Deols as producers should have looked into. But didn’t!

Though there was an overdose of it in the first hour, wish there were more of the lofty mountainous regions to indulge in and lift your sagging spirits!