Aayushman here plays the catalyst for syappa and change and is often made to carry the heaviest dialogues. 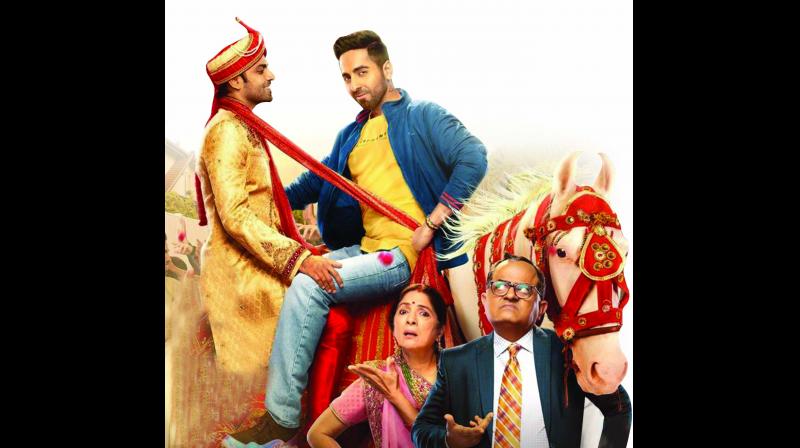 SMZS is a joyous film with a dizzy, crazy pace.
Rating:

Shubh Mangal Zyada Saavdhan is a breezy, ballsy film that breaches a middle class family’s comfort by broaching the uneasy topic of gay love, an issue that mainstream commercial Bollywood has broached only to snigger at before retreating coyly.

Writer-director Hitesh Kewalya’s Shubh Mangal Zyada Saavdhan (SMZS), whose klutzy translation in English is Extra Careful of Marriage, uses a garrulous family setting to say and show what it wants to, without demure or apologies.

Though it chooses to locate its politics about gender and sexuality in funny, familial situations and scenarios, SMZS doesn’t for a second dilute what it wants to say because neither is it coy about who it is, nor is it delusional about what the family’s reaction will be. The film is honest, sharp and quite audacious and its setting just makes the issue and the reaction both palatable and believable, not just for the film’s characters, but also for us, the viewers.

SMZS is set in Allahabad and located mostly in the Tripathi house — various parts of it, actually, including the courtyard, the bedroom of mummy Sunaina (Neena Gupta) and scientist daddy Shankar Tripathi (Gajraj Rao) whose invention of Kaali Gobi, jisko keeda nahin lagta, has triggered farmers’ unrest.

There is also a shaadi in the family — Chaman chacha (Manurishi Chaddha), Chanda’s (Sunita Rajwar) beti Goggle (Maanvi Gagroo) is to wed one Ashok.

Kartik Singh (Ayushmann Khurrana), with a nose ring and a filmy demeanour, is gloriously gay and loving being in love with Aman. He wants to show it, declare it. And since he has a massive Amitabh Bachchan hangover, he does so with showy dramebaazi, and at least once, shirtless.

Kartik and Aman work together and want to be together. And since there is a wedding in Aman’s family, they go.

Kartik and Aman begin something in a train that makes scientist Shankar throw up. Despite that they finish it at Goggle’s mandap, in full public glare, setting off a long, relentless ladi of patakha-like arguments and incidents in the Tripathi parivaar.

As batches of Kaali Gobi keep arriving in the Tripathi courtyard, not in tokris but as airborne projectiles, and farmers’ protest triggers curfew, Shankar Tripathi comes up with various uppays to shove his son back in the closet.

Shaadi with Kusum (Pankhuri Awasthy), the desperate bride who keeps running away, sharma-kar, at the mention of shaadi, is planned. But before that, there’s Aman’s kriya karam and naam karan. But, as is scripted in the shastras, every time one grievance comes out in the open in an Indian parivaar, all old, said-unsaid ones tumble out.

As Chaman chacha and Champa’s grief vies for significance and care with Sunaina bhabhi and bade bhaiyya Shankar’s anguish and discomfort over their sapoot Aman, old grouses and squabbles keep taking centre-stage, nudging Aman-Karthi’s samasya to the margins, much like pesky relatives at weddings who insist on being in every photo.

SMZS is a joyous film with a dizzy, crazy pace. Written cleverly, sharply, intelligently, keeping in mind the way Indian families function despite being quite dysfunctional, here characters are created not so much through their reactions to the main issue, but by their insistence on bringing up old hurts.

The dialogues are quite fabulous and have the whimsy of any argument in an Indian household.

In the garrulous, long, uninterrupted family fight where one revelation triggers insults, snide remarks, unintended innuendoes, grouses past and new. These fly about so fast and furious, that I want to watch it again to savour some truly hysterical scenes and lines.

A flying kiss to whoever thought of Shankar’s “Pareshaan hoon” to be a request for coitus.

There are moments, though, when SMZS is overwritten and not very funny. Mostly these are assigned to Ayushmann Khurrana, who has taken it upon himself to right many manly wrongs.

Aayushman here plays the catalyst for syappa and change and is often made to carry the heaviest dialogues.

His character also overdoes things, not just the love bit, but taking on the world, and challenging all things hetero, refusing to accept Jack & Jill and insisting that it’s time for Jack & Johnny to tumble down the hill.

Neena Gupta is in top form again, shining even in scenes that are not so chamkeela and bringing a warmth and, with it, making the Tripathi house a joint family home.

I so wish I was around the sets when she said these lines, “Chat (terrace) na hui, sauten ho gayi meri. Jab dekho chad ke baith jaate hain.”

She is complimented beautifully and ably by Gajraj Rao.

But for me three people really made this film — Jitendra Kumar, Manurishi Chaddha and Sunita Rajwar. The three of them are like the load-bearing pillars of SMZS, holding it all up. Without them, the film would not have had the flavour or joys of the small town family that it has.

I can’t really measure the impact Shubh Mangal Zyada Saavdhan is likely to have. Though it is quite upfront about gay relationships, including sex, and even weaves in the tragedy and irony of Section 377, of being legal one day, then illegal, and then legal again, it doesn’t breathe heavy, nor is it sanctimonious.

While it is confident of itself and its politics, it is not out to offend. It shows kissing and skin, but not in a way that would make mummy-daddy squirm.

Because it wants to be a family film, it spends a lot of time listening to them, and yet makes homophobia not so cool.

While it does so, it also says something very interesting and important.

SMZS says that boys and girls, men and women who are gay, lesbian, have been themselves while growing up in homes, around their families, mothers, fathers. And so, while the onus may well be on them as grown-ups to come out and claim who they are, let’s not delude ourselves by thinking that our parents never had any clue, or do not know.

It says, they were just too scared, and passed on their fear to you.

And it’s now time for all to confront that fear and say, quite simply, “Jaa … jaa, je le apni zindagi…”