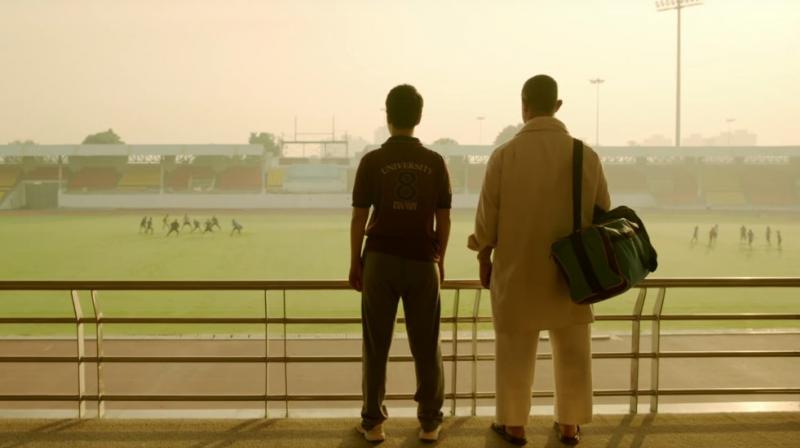 When I entered the theatre, I was constantly thinking that Dangal is the last ray of hope this year but at the same time, the hit formula of Aamir Khan releasing his films on the festive season of Christmas and New Years’s was not lost on me. Caught up in my own train of thoughts, the screen above me came to life and it was like one of those memorable journeys of 161 minutes.

Mahavir Phogat (Aamir Khan) is an Indian wrestler in Haryana who never won gold medal in his career. He is married to Daya (Sakshi Tanwar) and wishes to have a son who will realise his dream of winning a gold medal. But fate had its own game and Daya delivers four daughters in the hope of a son. One fine day, Mahavir’s first and second daughters, Geeta (Fatima Sana Sheikh) and Babita (Sanya Malhotra) beat up the local guys and the journey of Mahavir to train them to win gold medals starts. Omkar (Aparshakti Khurrana), nephew of Mahavir joins them in their aggressive training.

Soon after, Geeta and Babita become national gold medallists in women wrestling but their lives change upside down when they move to Patiala to National Sports Academy to train for Commonwealth Games 2010. What happens next is what Dangal all about.

Director Nitish Tiwari has finally added a feather of a well-made film on his cap. Though his previous outings Chillar Party and Bhootnath Returns were decent movies, his Dangal comes out as a champion. He had too much to do in just one film, the filmmaker managed to make a film that wins in every aspect. His narrative is engaging to the core. Though the film is pretty long, the emotions and humour quotient in the film will succeed in keeping you on the edge of your seat. The best part of the film is its easy flow. With Dangal, one can easily say that Nitish has made a mark for himself in the industry. Helming a film with a huge star like Aamir and appropriate narrative is commendable. Cinematography by Setu is praise-worthy as he has shot such beautiful locations in Haryana.

Aamir Khan’s last outing PK (2014) created shockwaves at the box office, Dangal is yet another such film where the actor completely steals the show. He proved that he can create magic on the silver screen with any script in hand. The way he has pulled off the character of a wrestler and his body transition is outstanding. His aggression in the second half definitely deserves a standing ovation. Dangal is one of the best gifts from Aamir Khan to his fans on this festive season.

When the makers were hunting for a female lead opposite Aamir Khan, lot of names popped up. Later, speculations were put to rest when the makers announced Sakshi Tanwar as their leading lady. While many were sceptical about her doing justice to this hard-hitting character, some also believed that the lady will emerge as a winner in the end. After seeing her performance in Dangal, one thing that struck me is that Sakshi has the capability to be crowned as a versatile actress. She made the character of Daya look real, raw and believable. Even though he plays a minor role, Aparshakti Khurrana as a supporting cast did a fabulous job. It takes a lot to leave a mark in a film like Dangal which is an out and out Aamir Khan film.

Coming to the girls Fatima Sana Sheikh and Sanya Malhotra, they truly are powerhouse of talents. They both are magical on screen and made the film look so convincing. Vivan Bhatena and Girish Kulkarni in their small roles are good. The noticeable part of the film is that, Dangal is the only film so far where people stood for the national Anthem both before and after the film.

On the other hand, few portions in the film will remind you of Shah Rukh Khan’s Chak De India, especially the last wrestling match and Aamir’s mission behind it. Music by Pritam is peppy, especially Dangal title track sung by Daler Mehendi, Hanikarak Bapu and Naina are melodious.

Dangal is the best feast on this Christmas and one can’t deny that the film is the best one of 2016. The film is recommended not only to Aamir Khan’s fans but also to the family audience who were awaiting a family drama that is high on emotions.