Irritating other people’s crotches gives this dim Chulbul many jollies. 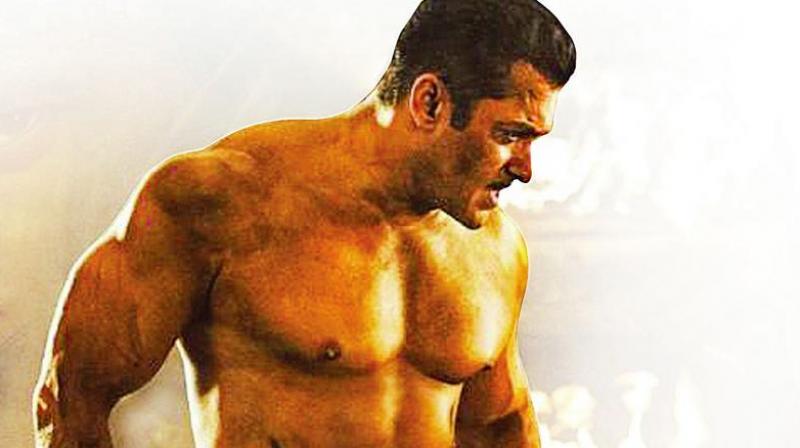 Salman Khan is physically very stiff or he has a terrible case of piles.
Rating:

I am bereft, heartbroken and very sorry to inform you that Chulbul Pandey, sautela son of Prajapati Pandey, resident of Laalgunj, UP, is no more.
His demise was kept under wraps by Messrs Khan & Khan, Dabangg’s producers and profiteers, expressly for financial concerns, but also to keep Arbaaz Khan gainfully employed. It appears that sometime after Dabangg 2 (2012), where Chulbul Pandey seemed a bit listless and limp, he passed on. Or it could well be that upon hearing writer and director Prabhu Deva narrate the harebrained script of Dabangg 3, Chulbul dropped dead out of boredom or depression, or both.

So they had to get hold of another, a look-alike, to play the part.

What we have here, in Dabangg 3, is a poser, an impostor pretending to be Chulbul Pandey. He is not, of course. What he is, however, is dim. Aur dim se yaad aaya, Mr Dim can barely talk in coherent sentences. So he can only be put in situations that demand some gurgling of him, and some painfully sluggish action. This means that we mostly don’t understand what he is saying. And have to suffer watching him deliver kicks and punches in slo-mo, and then watch the recipients of these lethargic kicks and punches slide or fly off in slo-mo.

The fabulous and entreating Chulbul Pandey — to whom we were first introduced in 2010 by writer-director Abhinav Kashyap — was one-part rowdy, one-part Robin Hood, one-part funny guy. But given Mr Dim’s constraints, the character here is whittled down to two simple characteristics — cute and good-hearted, but both these traits are underpinned by worrying dimness.

Despite this, the entire Dabangg enterprise is devoted to pretending that this indeed is Chulbul Pandey.

Here Chulbul is an assistant sub-inspector, a resident of Tundla, where he lives with his wife Rajjo (Sonakshi Sinha), child Bittu, brother Makkhi (Arbaaz Khan), father Prajapati (played by the late Vinod Khanna’s brother, Pramod).
To impress upon us that this is indeed Chulbul, he is first made to tackle a gang of goons. But these goons are certifiably stupid. So much so that while looting a wedding party, one of them comes upon a surahi and thinks it’s Alladin ka Chirag and stars rubbing it vigorously. It’s upon these special imbeciles that the dim Chulbul is unleashed. But so dim is he that at one point he takes off his own belt and then wonders why his trousers have fallen to his ankles. Poor thing! But irritating other people’s crotches gives this dim Chulbul many jollies. And so his special punishment for very bad people is to make one man pull another man’s underwear up to his head. This makes him very happy, and when he is very happy, he twitches his bums, one bun at a time. But somewhere a woman is in distress and for some reason she runs to Makkhi for help since he too is a cop now. She talks of women being sold into prostitution. This leads to Chulbul arriving to again toss, break, twist idiot goons and launch into a bhashan about bad ladies before delivering two slaps to one particularly bad lady.

Apparently, when a lady is bad, she loses the gentle privilege of being treated like a lady. All this muchaboutery is basically to take us to Bali Singh (Kichcha Sudeep) who looks like a serial killer with a gardening fetish.

Sometime now, I imagine, Prabhu Deva & Co. felt they needed a story, or at least a plot. And so they scratched their heads, smoked something they shouldn’t have, and since they were entirely incapable of progressing, they decided to regress and came up with what they thought could be a plausible back-story for Chulbul Pandey. Dabangg 3 harks back to tell us how and why an unemployed Dhakar Chand became Chulbul Pandey the cop, and who put that sad-sad feeling in his heart where once a sweet-sweet feeling lurked for a young medical student, Khushi (Saiee Manjrekar). All roads, of course, lead to the killer who is proudly unmarried.

The film’s climax is made up of two lumbering, middle-aged men trying to pretend they can fight. But so blah is this simulated action involving two men fast approaching senior citizenship that many bombs need to go off, and the earth needs to burst and rise and men need to fly about for it to even look like it’s a fight scene.

The Dabangg franchise has been passed on from one great director to other lesser ones for reasons beyond me. The only plausible explanation I can come up with is that Salman Khan thinks that writers and directors don’t matter. All that matters is that he be on the screen for the entirety of the film, doing whatever he feels like. His fans will still love him and bestow box-office bliss upon all his crap.
Or, it could be that writers and directors expect some coherent dialogue delivery, at least an attempt at acting, and since that is beyond Salman Khan, he prefers homely settings. Enter writer-director Prabhu Deva whose directing skills are aimed at people with the age and an IQ of 8, and whose great contribution to filmy dialogue is, “Don’t angry me”.

His Dabangg 3 is a lesson in many things, including how to kill a perfectly brilliant character who had the power and goodwill to spawn a franchise.
In the totally incapable and inept hands of the dancer-turned-director, Dabangg is reduced to infantile nonsense interspersed with either songs or fights, neither of which are entertaining or thrilling.

In almost every scene there is an attempt at comedy everywhere, the kind that irritates. Including making the main character regress to almost a prenatal stage where eating, farting and randomly chuckling seem to be his primary activities. The most entertaining thing about Prabhu Deva’s film is that though set in Uttar Pradesh around Pandeys and Singhs, Dabangg 3 has a very strong South Indian accent.

Including Kichcha Sudeep, who is very good as Bali the villain who likes to hang and dangle people, and has a particular fondness for rose bushes.
Though he tries to do that thing which is usually not allowed in any of Salman Khan’s films — act — the question is, how much dandiya can one man play all by himself.

Salman Khan, the infantile grown man, thinks he’s still got it.
There is a scene in this film where he actually has a pissing contest with two other men and we are shown that his is longer and shoots farther. That’s the trickery of cinema. But the camera, when it’s looking straight at him, doesn’t lie.
In Dabangg 3, Salman Khan is present on the screen for almost the entirety of its three hours. And while he can be charming and does hold audience attention, he falls woefully short of expectations.

Salman Khan is physically very stiff or he has a terrible case of piles. He barely moves, and most of the time the camera is focused either on his face or his torso. He delivers his lines as if he has just learnt to speak, and his action sequences made me feel bad, mostly for you and me. Because they are unbearably boring, yes. But also because they are an affirmation of how cynical our superstars are, and how little they care for us.