The film neither throws any light on how a rape survivor should be dealt with nor focuses on the trauma that a woman undergoes. 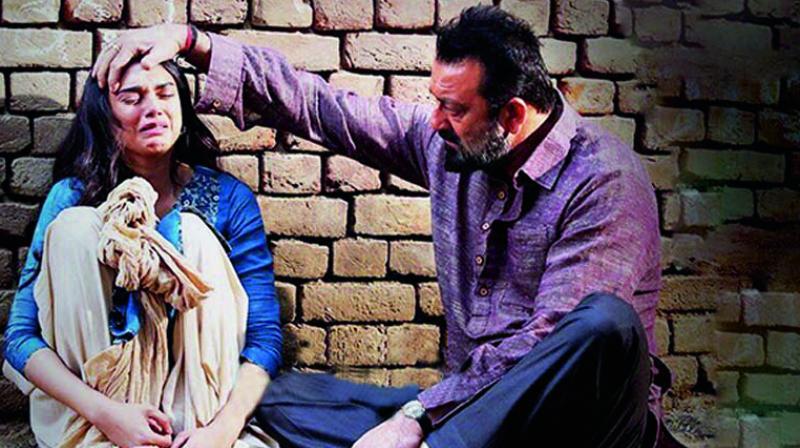 A caring father dotes on his only child — a pretty girl who does bridal makeup for a living, and comes home late. The father (Sanjay Dutt), a shoemaker and the owner of a small shoe shop, even cooks for her as she returns deadbeat from the wedding of her best friend.

Now, to establish their strong emotional bonding, how many scenes do you think are required?

A good writer’s imagination could achieve that in one scene, or maybe, a couple, unless the director is insistent on shmaltzy mush that might appeal to the hopelessly sentimental. But director Omung Kumar wanted to make sure that this film garnered enough publicity as Sanjay Dutt’s somewhat comeback vehicle of sorts, and so, has added too much of emotional stuff, reminiscent of the ’70s, to give us as much as one half of it.

The trouble is, Bhoomi deals with a very serious theme of rape, and tells us how the mighty get away with it, mostly due to the survivor wanting in enough moral courage, possibly for the fear of societal pressures. But, so superficial is the treatment that you wonder whether the content is meant to merely titillate the voyeuristic instincts of viewers or some serious thought was ever conceived behind such a film.

The way Bhoomi (Aditi Rao Hydari), who gets kidnapped and brutality gangraped on the eve of her wedding to her boyfriend, may not be shocking to us: one hears of such horrific incidents day in and day out in our country. After she disappears and returns home broken and shattered, she gets rejected by her groom (Sidhant) and the people at large. Worst is, she is denied justice in court too, for lack of evidence. And that’s when the father cries foul, is completely dejected and breaks down. He and his best friend (Shekhar Suman in his yet another hamming mode) decide to take law into their hands and give up seeking justice.

Now, now... All this sounds familiar? Besides many other zakhmi aurat’s who reigned supreme in Bollywood’s ’80s, we saw the volcano of talent, Sridevi, in a similar avatar recently in Mom, where the aggrieved mother takes the gun to perpetrate the rapists, single-handedly. Here, it’s the father who avenges his daughter’s shame. And just like the way Sridevi gets to underline poetic justice, Dutt, too, kills with a vengeance and pats himself on the back with pride after completion of his mission.

The film neither throws any light on how a rape survivor should be dealt with nor focuses on the trauma that a woman undergoes. Instead, the anguish and pain is so synthetic that it doesn’t even register.

All one hears are threatening tones and macho men (Sharad Kelkar is the chief villain) flaunting their machismo and harping on their power with a “jaante nahin hum kaun hain” attitude.

Bhoomi also makes a mockery of law and how court functions. A court hearing has the accused, defence counsel, family, extended family, neighbours in full attendance as the lawyer is seen cross-examining a doe-eyed damsel in distress Hydari and screaming her lungs out dramatically. The director seems to be unaware of how rape case hearings are conducted, and handles them throughout in a filmi manner.

Dutt has a presence which should be put to good use now. Not young anymore to play the romantic lead, he should be happy playing father or uncle but with some clear characterisation. Hydari looks unsure of what she is expected to do: her shaky stammer is less characteristic and more stagy. Kelkar seems to be enjoying his new-found success as the antagonist, but repeats himself in every film.