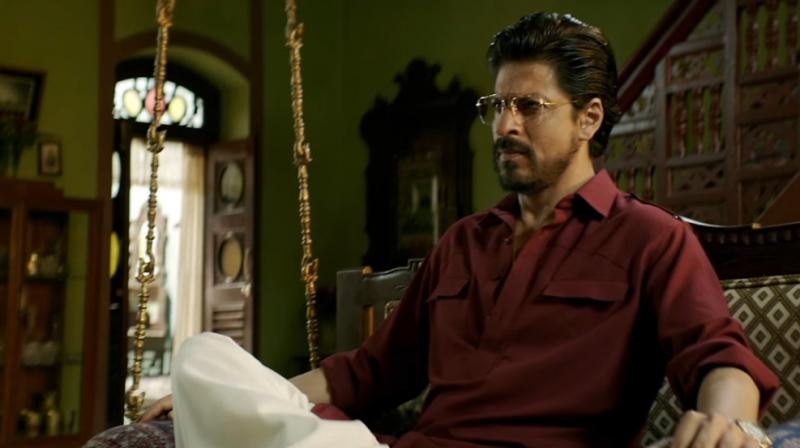 Mumbai: Shah Rukh Khan’s ‘Raees’ is easily the most anticipated film in recent memory, but unfortunately, its soundtrack is not worthy of the feisty potboiler that it is.

The film, set in the 80s-90s, covering Bollywood in all its mainstream glory, pays tribute to the music of the era, while staying true to its geo-political demographic.

The soundtrack has the ethnic flavour of Gujarat written all over it, as is evident in songs like ‘Udi Udi Jaaye’ and ‘Ghammar’.

However, this somewhat justified need to pander to the era is the album’s labefaction.

Though the re-interpretation of the cult classic ‘Laila O Laila’ by Ram Sampath does score for its terrifically contemporised use of sounds that nonetheless hold semblance with the ones that are associated with RD Burman, it still seems jarring in an otherwise mundane chronology of songs. The song reminds one of Pritam’s magnificently produced ‘Dum Maaro Dum’ remix.

Pritam, who’s floated his new venture Jam8 with the film, delivers the quintessential romantic ballad in ‘Zaalima,’ though it is almost a refraction of his own ‘Gerua’ for Shah Rukh Khan’s ‘Dilwale’ and the delectable ‘Pee loon’ from ‘Once Upon a Time in Mumbaai’. The harmonium based interlude does provide a pleasant respite in an otherwise humdrum orchestral affair, which remains underwhelming despite of Arijit Singh and Harshdeep Kaur’s best efforts.

‘Dhingana,’ with the infectious intro that was used to good effect in the trailer, however, comes across as a serious dampener. Mika Singh is at the top of his game with the vocals, very much like lyricist Mayur Puri, who’s grasped the essence and flavour of the film with much aplomb. However, the very obvious percussive and compositional inspiration derived from Ajay-Atul’s brilliantly evocative ‘Deva Shree Ganesha’ from Agneepath, renders it unimpressive, almost making it seem parodical.

The major drawback of the album is the glaring unoriginality of every single song, which might have been a culmination of a need to ensure success by alluding to existing or proven trends.

While most reserve the best for their title track, ironically enough, ‘Enu Naam Che Raees,’ is the worst song in the soundtrack. The Ram Sampath composition borders on being a very cheap imitation of AR Rahman’s brilliantly produced ‘O Saya’ from ‘Slumdog Millionaire’.

‘Saanson Ke’ is the typically mundane, avoidable melancholy-driven song, that one has come to associate with a Pritam-KK collaboration. Composed by Aheer for Jam8, the song, decent at best, is severely misplaced with respect to the general theme of the film, so much so that the potential placement of it in the film is a scary prospective to imagine.

Ram Sampath’s ‘Ghammar Ghammar,’ inarguably the best song in the soundtrack, is the closest the OST has got to getting the rooted ethnics of Gujarat right. Well composed flanked by a peppily constructed percussion, the song has camouflaged tones of Punjabi music ably implemented onto it, forcing you to give it a ear too many. This one’s all set to be a regular at every single festival coming up this year.

It makes one wonder why the music would be overlooked this badly in a film with a stature as high as Raees’. But maybe its superstar’s poignantly charming aura was potent enough for everyone to turn a blind eye on the soundtrack’s quality being a prerequisite. Or should we say a deaf ear?