Dangal movie review: A tale of blood, sweat and grit

Dangal, a feminist tale in a familial, patriarchal setting, sticks to the real story to the extent possible for an interesting screenplay. 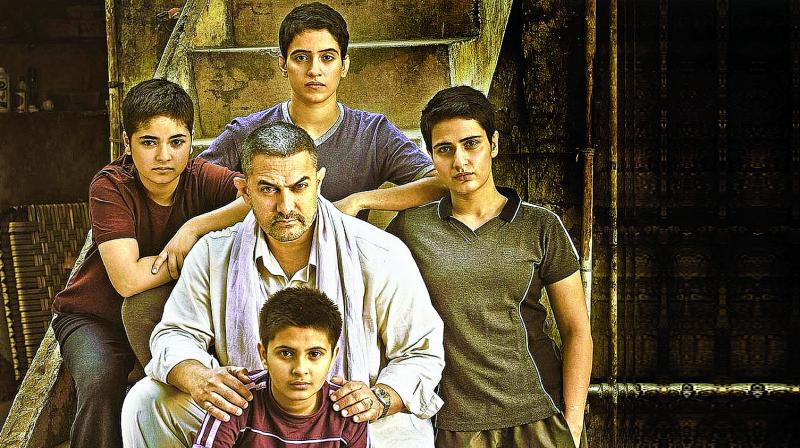 A still from the movie Dangal
Rating:

Writer-director Nitesh Tiwari’s Dangal tells the real-life story of the journey of Mahavir Singh Phogat and his two daughters — Geeta and Babita — from a small town in Haryana to glorious gold at the Commonwealth Games in 2010 and 2014. It gives us a peak into what it takes to create female champions in a country where ultrasound machines are deployed to send out early warnings of a calamity.

That this film comes at the end of 2016, a year when this nation thumped its chest and celebrated P.V. Sindhu, Sakshi Malik and Dipa Karmakar with proud tears, tells another story — the story of India, a land of sweet ironies. A country where women’s adversaries at the domestic, national level are far more malevolent and menacing than the ones they face in the international arena.

Dangal, a feminist tale in a familial, patriarchal setting, sticks to the real story to the extent possible for an interesting screenplay. It takes a few liberties, but they are means to an honourable end, adding up to more than just paying obeisance to the patriarch. Father, of course, remains the hero. But it’s the girls who make him thus.

That Dangal uses wrestling, a game that’s as Indian and as masculine as it gets, to deliver not just life’s lessons and a simple fact about betis, but to humanise and deliver us from prejudice and misogyny while entertaining us is a feat worth celebrating.

Early on itself, Mahavir Singh Phogat’s credentials as a still-fighting-fit wrestler are established when a young office colleague taunts him. He responds by challenging him to a bout.

And that’s when, in sync with a wrestling match being relayed on TV from Seoul Olympics 1998, Mahavir (Aamir Khan), with his big biceps and a thwarted dream, establishes the film’s premise: That his dream to bag gold for the country still lives, and it shall be realised before we leave the hall. It’s stagey, but it’s fun.

Mahavir’s dream now rests on his pregnant wife, Daya Shobha Kaur (Sakshi Tanwar). He expects a chora who can be trained to win international gold, but she gives him a chori.

In between her pregnancies is a montage of ridiculous nuske, tona-totkas and a string of unsolicited advice from neighbours and well-wishers of how to get a son. These offerings to fate involve feeding holy cows, bizarre nightly chores, and are delightful because it’s all so true. And idiotic.

After four daughters Mahavir gives up trying and hoping, locking up his medal and dreams in a trunk.

But then one day, when his two daughters — Geeta and Babita (played by Zaira Wasim and Suhani Bhatnagar respectively) — thrash boys who teased them, glimmer returns to his eyes. And this leads to the tender, pulsating heart of the film.

Starting from the twilight treat of gol gappas to the daily regime of exercise, practice, discarding salwar-suit for shorts, this emotional segment is outstanding. It’s not just packed with gentle humour that tugs at our heart, but is delivered with such sincere and note-perfect acting by all but especially the two adorable little girls that it demands a collective, audible “awww” from the audience.

In the fringes is Geeta-Babita’s cousin Omkar (Ritwik Sahore). He keeps shining light on the girls by being their smiling companion, sweetly-sulking guinea pig, and with his crackling narration that’s packed with funny comments and some mild bitching.

Under Mahavir’s strict vigil, Geeta-Babita’s daily, almost religious routine that paves the road from nothing to realising an impossible goal, in this case their father’s, is energising, exciting, motivating, the stuff most sports films are made of. It’s complete with competitions and matches in small villages where sniggering men and their offensive comments make each victory feel like a battle won.

Till interval, till the girls grow up and go to Patiala to prepare for international competitions with the national coach, the film, though long, is brilliant and compelling. After interval it feels longer than it is and less like a film.

Dangal’s second-half is like watching several wrestling tournaments, in real time, in one sitting.

Almost all sports films follow a similar arc. There’s the underdog rising from the ashes to a challenge, a rocky journey that goes up and down till it’s set to take off, only to meet with disappointment that makes the final victory super sweet.

Most are similarly manipulative, though this one, like the silly Mary Kom, goes a step further and employs the national anthem which is, sadly, with every film, losing some of its mystique for me.

Though Dangal is predictable, the twists it takes to reach the inevitable end add interesting layers to the film.

Despite the bond of father and daughters — especially with Geeta (adult avatar played by Fatima Sana Shaikh) — the film is brave enough to make a girl kick her devoted father’s pagri, honour.

Though of course at the end patriarchal order is restored, it’s gutsy and interesting because it gives the girls a mind of their own, making them real, fallible and not just deferential, thus knocking off the halo around betis.

Another interesting thing the film does is that it takes the father away from the final victory, making the last lap to gold the girls’ own.

Director Nitesh Tewari was an inspired choice for this film. He’s directed children before, to outstanding outcome in Chillar Party along with co-director Vikas Bahl. He is very good here as well, except in the end when he allows cinema to become secondary to the cause.

But there’s no denying that Dangal is a ballsy film in many ways. While it makes us watch women at play, in a rough, tumble-dry kinda physical sport, it packs in many lessons and is not boring at all for a long time. And it has memorable performances from the entire cast.

For a few years now, since 3 Idiots, I have taken a dislike to Aamir Khan. I find the solemnity that surrounds all his characters, reel and real, insufferable.

It’s not enough that he plays only the saviour, but there’s more than a tinge of piety about him, a godly halo encasing his alert ears.

He plays the saviour here as well, but for a change he lets the story and other actors take centrestage.

Aamir’s body transformation is now almost a given with each project, and it’s always impressive. But this time he’s done more than that. He has submitted, humbly and intelligently, to a role, and he is very good.

He doesn’t upstage the film or other actors with his acting chops which often have more horse-power than required. He brings gravitas and a touch of real to this tale of blood, sweat and grit.

By his side, making the story and setting more believable and real, is the very talented Sakshi Tanwar. Ms Tanwar has been simmering for long. Time to give her a role that matches her brilliance.

The two senior wrestling girls are very good, as is Aparshakti Khurana who plays the grown-up cousin/narrator. But my heart belongs to the two juniors — Zaira Wasim and Suhani Bhatnagar. They warmed us up to wrestling and set the stage for Fatima Sana Sheikh and Sanya Malhotra (Babita) to shine.

An aside: In some scenes Fatima Sana Sheikh looks disturbingly like the identical twin of Priyanka Vadra Gandhi, complete with royal dimples. Someone please get down to writing a script, or just tell Prakash Jha to watch Dangal.