One half of Panga is devoted to reminiscing and yearning for the life left behind. 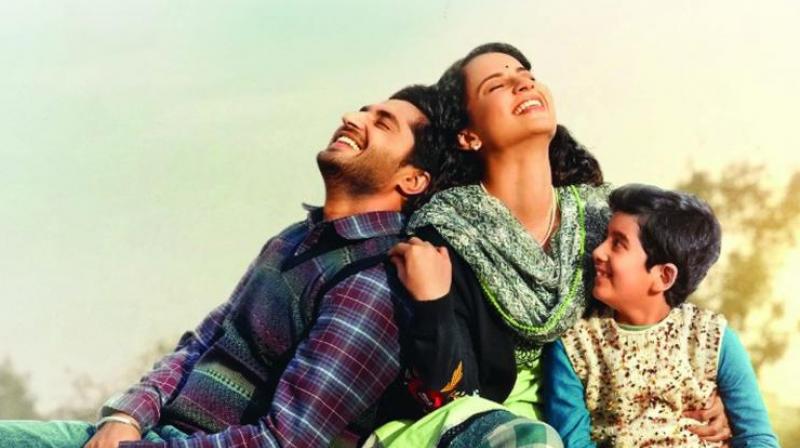 In Panga, that dream, that yearning, is pivoted on real talent and achievements and is nurtured by more than just self-belief. It is cradled by a supporting family.

The title of writer-director Ashwiny Iyer Tiwari’s third film, Panga, insinuates that some dramatic fireworks await us. And since the film stars Kangana Ranaut, it’s only natural that we approach it expecting some high jinks and spirited brawls.

Panga has all that, but of the sweet, gentle variety. The kind that doesn’t seem sensational, but is, in fact, momentous — big, massive shifts in small, little lives.

Panga is a charming, warm, gharelu dramatisation of the thing that seethes for years and then dies within the walls of many homes — unfulfilled dreams of mummyjis born out of what they were capable of, the life they could have had, what they had to give up for their family and grihasti.

In Panga, that dream, that yearning, is pivoted on real talent and achievements and is nurtured by more than just self-belief. It is cradled by a supporting family.

One half of Panga is devoted to reminiscing and yearning for the life left behind. The pain, heartache make this part throb with low-grade but continuous disappointment and despair that, in the everydayness of life, gets exhausted and retires exhausted on most nights.

The other half of the film is in pursuit of that dream, going from one city to another, one training session to a bout, followed by more bouts.

Here it loses some of its magic as it turns into a competitive sports procedural.

Though the sports bits are quite nicely done — much better that what many big directors have managed in bigger films — Panga’s strength lies in its well-defined characters played by excellent actors.

The first part is nicely populated by them, while the second part relies almost entirely on Kangana Ranaut. Though she is fabulous throughout, without the others the film loses some steam. But there’s an honest purpose to this slowing down, to showing the mundanity of the pursuit of a dream, of the high that hardly ever comes.

Panga doesn’t try to portray making mid-life choices easy or inevitable. There are no mean spouses to run away from, no revenge that awaits extraction.

It shows the difficulty of making that choice, on the mummyji and the family. It also shows that just because you decided to venture out, no one will be waiting with garlands for you.

But, it says, with all the attendant problems, heartaches and absolutely no guarantee of success, if you do find yourself often thinking of a life that could have been, and there is even a sliver of chance that you can, maybe, attempt to grab a tiny piece of it, go for it.

Set in Bhopal, Panga tells the story of Jaya Nigam (Kangana Ranaut), a railway employee who hands out train tickets at a railway station.

She is the mother of a seven-year-old Adi (Yagya Bhasin), and the wife of sweet Prashant (Jessie Gill). She loves them both and her life is in a loop of a daily routine that leaves little time to chew the cud of life that once was.

But every once in a while, after she has put little post-its in their tiffin boxes, after she has cut work to take her son to the doctor, and after the relaxing evening walk with her husband, something plays in her dreams that makes her throw sudden kicks while asleep.

The film’s story takes a turn when Jaya misses Adi’s sports day because of work and though she tries to make up to him, he is insulting and rude.

Prashant, the caring husband who often plays mediator between Jaya and the world, tells Adi the story of his and Jaya’s romance, and about his mother who was, seven years and two months ago, the captain of India’s Kabaddi team.

Adi stalks Williams’ post childbirth life online and at home he stalks Prashant with the suggestion that a comeback at 32 years of age is not unthinkable.

When Prashant ignores him, Adi piles on guilt.

Panga doesn’t show a dramatic, let’s conquer-the-world return of Jaya to the arena where the skies thunder and gods throw rose petals.

It shows a mother who, with determination and a punishing routine, struggles, wavers, but goes on. It shows her emotional struggle at having to leave behind her life and family, of having to make tough choices, sacrifices — and the impact it has on others.

We see the hurdles she faces, the snide remarks she endures, the big age gap between her and other players, the insinuation that she has come riding on past accolades, and a captain who is not at all keen on celebrity comebacks.

In this segment, where the wait is long and victories elusive, the film tries to inject some drama by summoning Jaya’s former teammate and bestie, Meenu (Richa Chaddha).

But as the teams of South Korea and Iran loom, and Jaya sits in the sidelines, tapping her feet and waiting, the film leads up to a climax that’s predictable and yet it made me chew up one corner of my shawl.

Written by Nitesh Tiwari and directed by Ashwiny Iyer Tiwari, the husband and wife team that gave us the fabulous Bareilly Ki Barfi (2017), Panga mostly spurns melodrama, and instead gives us a world we can connect with and live in for a bit.

Panga’s heart lies in Jaya and Prashant’s middle class life built around domesticity, where everyone tries to catch those five extra minutes of sleep in the morning, then rushes about getting ready, calling out for stuff, screaming instructions before rushing out, leaving clothes, used utensils strewn around in a quiet house, and then returning, one by one, in the evening, bringing the house back to life with chatter, hot meals and laughter.

This world is knitted together beautifully by the screenplay writers, the art director and the costume designer.

The hand-knitted sweaters, a dinning table where bottles of achar and sauce sit always and the switch boards with the darkened area around them carrying telltale signs of life needing both, light and air.

This world is inhabited by characters who are distinct and filled with lovely details. And all these characters are assigned to actors who inhabit them with honesty, sensitivity and skill.

Jessie Gill as Prashant, with his big, reassuring smile, is just the perfect foil to the Ranaut’s simmering Jaya whose emotions dance in her eyes all the time.

Neena Gupta has a small role, but adds character to Jaya and Prashant’s life.

Richa Chadda, who obviously piled on some weight for the role of the kabaddi coach without making a big deal of it, is very good, though her character is the only one that’s a bit filmy and often utilitarian —mostly her job is to shine the spotlight on Jaya.

Panga taught me a lot about kabaddi — what is a raid, how a dead player can come alive. But what I really enjoyed watching was the girls’ victory gesture — simultaneously slapping their thigh and raising a hand in a gesture of, teri toh… It’s called the thigh-five.

Panga’s team can take a moment to take a thigh-five.