Till now, dance and talent reality shows relied on a heavy dose of filmy drama to catch our attention and keep us engaged. 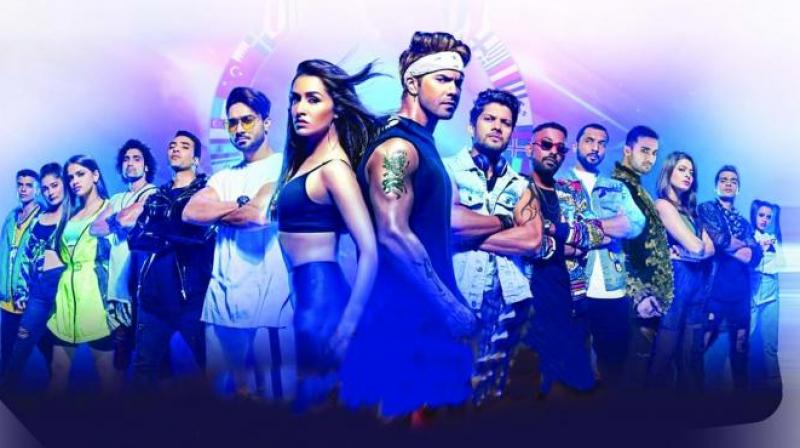 Street Dancers and Rule Breakers often have dance face-offs which Inayat’s group wins, but then she returns with her head covered to her conservative Muslim family.
Rating:

Till now, dance and talent reality shows relied on a heavy dose of filmy drama to catch our attention and keep us engaged.

But now, it seems, films are all set to regress into reality shows themselves.

Dancer-choreographer-director, Remo D’Souza, who has spent more time as a judge on a wide variety of reality shows than choreographing songs, has created a reality show masquerading as a film in 3D.

Street Dancer, true to the simple minded genre of let’s-dance-to-challenge-and-conquer-all, is a chitrahar of grand, impressive, foot-tapping dance performances strung together by a very silly but melodramatic story that carries a moral — love all, hate none. Especially love Pakistanis, and all those illegal immigrants who languish in dark alleys in foreign countries, cold and hungry and desperate for a ticket home.

The film’s story, as I said, is simple. In London lives Sahej (Varun Dhawan) with his family. We barely meet his mummy-daddy, but spend some quality time with his Bade Bhaiyya whom he loves and is keen to do everything in his power to wipe the sad, bechara look from his face.

You see, a dance performance some years ago at the world’s championship of dance, Bade Bhaiyya’s big, dramatic jump crushed his knees.

And now it is up to Sahej, who is sweet but also without scruples and slightly dumb, to fulfil Bhaiyya ka har sapna, i.e. winning the world dance championship.

Sahej now leads his bhaiyya’s all-Indian group called Street Dancers. We are introduced to all its members in a quick, let’s-take-the-roll call sort of way.

Then there is an all-Pakistani group called Rule Breakers. We barely meet them, except for one main character, Inayat (Shraddha Kapoor), and her cousin (Salman Yusuff Khan).

These two dance groups are perennially fighting about who is better though it’s quite clear that Rule Breakers are superior to Street Dancers.

Somewhere far away from these two confrontational groups is a much more professional dance group called The Royals. It’s made up mostly of racist goras plus one desi girl who is not just the best dancer in the film but is also an item of interest for Sahej. He calls her Bubu (Nora Fatehi).

Though they seem quite platonic, we are told they are a thing.

Street Dancers and Rule Breakers often have dance face-offs which Inayat’s group wins, but then she returns with her head covered to her conservative Muslim family.

The film is not communal. It is just simple minded.

Despite their fights, the two groups gather to watch India vs Pakistan cricket matches in the same restaurant run by Anna (Prabhu Deva) who, Inayat later discovers, is up to some clandestine stuff at night.

India wins the cricket matches, of course, and the two groups have childish fights here with donuts and at one point Inayat pinches and twists Sahej’s nipples. Good on her, I say, and he had it coming for throwing them nipples in our face in the very first scene.

Flashback reveals a certain very stupid thing that Sahej did and it comes back to haunt him. At the same time when, in a plot twist inspired by real-life work of Nishkam SWAT (Sikh Welfare & Awareness Team), both the teams land up at the world championship of dance which Sahej wants to win for his brother, but Inayat wants to win for a greater cause.

You dance to impress, but I dance to express, she says.

At the world championship of dance, we are told repeatedly, there are no rules.

This is the film’s best part. The high-octane dance battles are stunning and they put 3D and melodrama to great use.

Though Street Dancer’s story and screenplay are devoted to just two things — to impress us with the dance performances, and make us weep with melodrama — the superb execution of both in the film’s last 20 minutes lift it.

It invokes Ganapati Bappa moriya, and ends with Mile sur mera tumhara... And despite all its flaws, wins us over, and like the happy, teary judges of a dance reality show at the finale act, I too wanted to stand up and clap.

That’s mostly because there’s an honesty in its intent. Street Dancer is what it is. It doesn’t pretend to be anything else.

Take the film’s opening scene whose purpose is just to tease us with Varun Dhawan’s 8-pack abs.

We wakes up in the morning and walks through his house in an open, long hoodie, pausing to ask his mummyji, “Bhaiyya kahan hai?”

Show me one Indian mother who will, early in the morning, look at the shaved, bare chest of her jawan munda, and instead of saying, “Shirt ke button band kar,” utter some sweet inanity.

But there is a queerness to the whole bare-chested men dancing with each other, swinging their danglers. In fact, there is no rigid masculinity in the film, nor its attendant syappas, except in the drawing room of Inayat’s house.

If one were to judge by the sheer quality of dance, then Varun Dhawan will come last, I mean, ekdum last, in the roll call of this film which includes many really fantastic dancers, on top of whom sits Nora Fatehi twerking. She is so sexy and amazing. My eyes kept popping out of my sockets every time she came on. Shraddha is quite good too, and Dhawan can act.

Though Prabhu Deva’s name is the first to flash on the screen in opening credits, the film keeps him uselessly occupied in silly scenes for a very long time, as if it took out a restraining order on his pelvic and feet.

We wait and wait, and when he does finally come on, we see that he no longer has the agility he once did, and his small movements seem minuscule in front of many young so-and-so somersaulting, flying in the air and landing in crotch-tearing splits.

But man, he’s still got the rhythm.

But, I have a big complaint. What’s the deal with songs these days? Why are all Bollywood dance songs in Punjabi?

Street Dancer has just one song that’s not Punjabi and doesn’t talk of a gabru jawan, and that’s a remix.