Aarya is based on the Dutch series Penoza (meaning, the underworld), which began airing in 2010, was a huge hit and went on for five seasons 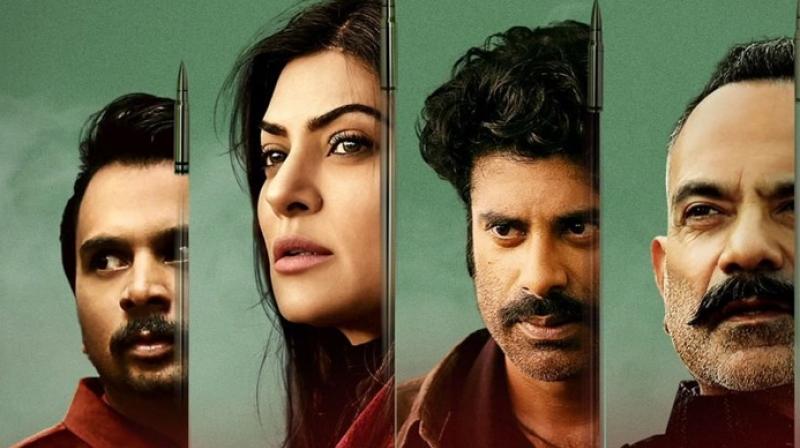 Let me just say it straight up — Sushmita Sen is insanely attractive. And Aarya, created and directed by Ram Madhvani and Sandeep Modi, is a riveting watch.

Sushmita is sexy, glamorous, glowing, fit, and she commands and controls the camera’s lens as if it were her drooling fan. Sushmita is also a star and she brings all her star power to ground Aarya. But Sushmita isn’t a great actress. Her acting chops are limited to giving a few “looks”.

That's why the show’s directors have had to conspire with cinematographer Harshvir Oberai and editors (Khushboo Ra, Abhimanyu Chaudhary) to cut, chop, fade, zoom in, go slomo, use every trick available to insinuate that she is acting, moving, while keeping her gorgeous face and its one expression on the screen.

But Sushmita Sen’s repertoire is too tiny, too meagre for us to be fooled.

We love her warm charm, but hope that by season two she grows from just giving a “look” and learns to transition from one expression to another without the help of editing.

Aarya is based on the Dutch series Penoza (meaning, the underworld), which began airing in 2010, was a huge hit and went on for five seasons. Penoza told the story of Carmen, an Amsterdam woman — a wife, a mother, and then a widow and a godmother — who is forced to take over her husband’s business to pay off his various debts.

It was remade in the US because of the universal appeal of its themes of love, loyalty, betrayal and family ties, but it didn’t fly. Now the series, about a mother protecting her children, has found a happy, natural home in Rajasthan, India.

Set in the desert state's rotting mini-royalty, Aarya’s first season is based on the original almost scene-by-scene, with just a few changes thrown in to fit its milieu.

The series' first and last episodes open with Aarya (Sushmita Sen) hanging upside down on TRX straps, a familiar sight for those who follow Ms Sen’s Instagram account.

In between these two scenes is the story of three business partners, a stolen drug consignment, a murder and a woman torn between her two families -- father, mother, sister and brother on one side, and husband, daughter and two sons on the other.

A cop is after business secrets, the mafia is after the drugs, a business partner has begun to unravel and everyone seems to be hiding something.

As Aarya takes charge, some things go as planned, while others don’t.

Another murder, a kidnapping, deceit. With every threat coiling around her family, tightening its grip, Aarya's moral compass shifts to one that is beyond all moral considerations -- the mother who will protect her brood at all cost.

Every time things get too dreary, Aarya distracts itself and us by playing some LP records of Bollywood oldies — to take a deep breath and relive happy memories before the next dark twist.

This is the series' trick that keeps us hooked. Like Aarya, we too yearn for the husband-wife in love, the sunshine days of a happy family…

I have a very simple test of how good a serial is. If I binge watch it in one go while battling sleep and despite a busy early morning looming, then it's very good.

If I can take a break, but must then return to it asap, then it's good. And if I take a break but then browse around for other stuff, it's blah.

Aarya is good. Quite good, actually. But I could take a day’s break.

It's not Pataal Lok good, though Aarya more than makes up for the dearth of women in that masculine, macho series.

Half-way through Aarya I could figure who is behind it all, yet I was immersed in the intrigues of this world of Audis and Mercs, mistresses and sex, because of the excellent ensemble of actors and its brilliant screenplay.
Though it’s almost a copy-cut-paste job of the original, Aarya has a high production value, it looks and feels posh and its big scenes are made up of lovely, small details.

Aarya has a long list of actors, and each one gets a character that either has layers and complications or grand, powerful scenes. And while everyone is good, some are just stand-out fabulous.

Chandrachur Singh as Aarya's husband Tej is delightfully normal and adorable. Jayant Kripalani as Aarya's father Zorawar, with Sikandar Kher as his point man Daulat, are deliciously dark and together they create the swag and rot of Rajasthani royalty.

Namit Das as the coke-snorting Jawahar is manic, unpredictable, and Vikas Kumar as the earnest but annoying ACP Khan creates a character that will outlive the series.

Manish Choudhary as the Russians’ peddler-distributor Shekhawat, Vishwajeet Pradhan as his man Sampat, Sohaila Kapur as Zorawar's bitter, day-drinking wife Rajeshwari, and Maya Sarao as Maya all have a few big scenes and with each one they add muscle and moxie to the series.

Even the three kids — played by Virti Vaghani, Viren Vazirani and Pratyaksh Panwar — are measured, memorable.

Writers Sandeep Srivastav and Anu Singh Choudhary have embellished Sushmita’s character with items from her life, making it, in some ways, an extension of the actor’s own personality.

Apart from the hanging routine, there's rousing chanting of stanzas from the Gita, again a regular feature on Sushmita's Instagram.

Sushmita's character, which has been given an Eileen Fisher type of layered, minimalist but chic mommy wardrobe, keeps calling all her children “Bachcha”, instead of by their name.

A trait of a woman who is a natural caregiver, perhaps. But it’s jarring and sticks out as an affectation because of Sushmita's studied attempt at "acting",

Sushmita has powerful screen presence, but her dialogue delivery is the sort you hear in acting classes — rehearsed, deliberate, read out.

She's got everything going for her. All she needs now is a little fluidity and to shed some of her diva gold dust.