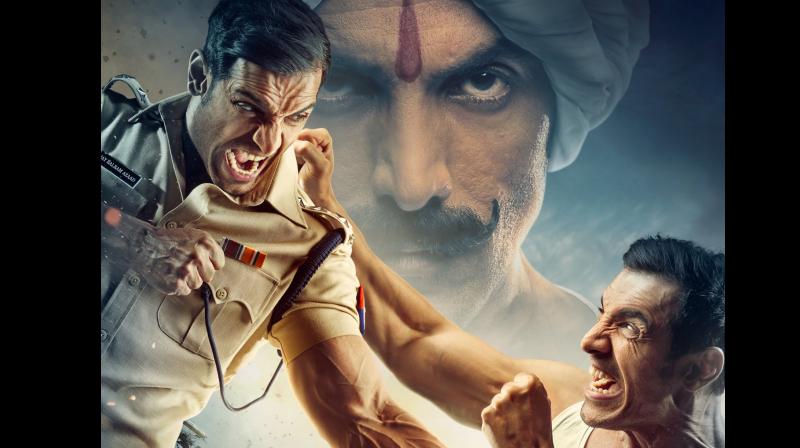 Even in triplicate, John Abraham’s lack of acting skills remains a matter of concern for us and the film. (Photo: Twitter)

Milap Zaveri has written and directed Satyameva Jayate 2, which apparently is the “spiritual sequel” of the 2018 Satyameva Jayate. There was something mildly entertaining about that film, whereas SJ2 is just a loud harangue and dhishum-dhishum.

Satyameva Jayate 2 doesn’t have a story. It just has an urgent desire to make “Mera Desh Mahan”. And to do that it recruits the services of not one, not two, but three John Abrahams and all the Hindutva chauvinism and idiocy they can conjure.

Even in triplicate, John Abraham’s lack of acting skills remains a matter of concern for us and the film. So SJ2 doesn’t waste time on conversations because even three John Abrahams can’t string together a coherent sentence. It just sets off in mission mode, fist-first, to destroy all manner of evils with all manner of criminal, vigilante violence.

No one talks in this film. They all just maro seeti-bajao dialogue which fall in three neat categories: There is patriotic bombast: “Tan, Mann, Dhan se bada Jann Gana Mana“.

And finally, there are insults and threats issued to the privates and penile functions of bad men. Sample above, but also, “Aurat ki jo izzat na kare, woh mard nahin, murga hai“.

I think that in the actual dialogue in the film, it was murda (dead person), not murga (a rooster). But since I was grabbing at straws to stay awake, imagining all manner of men as pesky roosters kept me smiling.

Set in Uttar Pradesh, SJ2 is about a multi-generational fight again bhrashtachar. It began 25 years ago with Dada Saheb Balram Azad (dhoti-clad, moonch-wala farmer) in Varanasi, but didn’t end well. It’s now being carried forward by his two betajis.

Satya Balram Azad (John 2) is a bespectacled politician in kurta-pyjama and a casket-like vasket. He is sulky and has a wife who looks like she is the love child of Bhagyashree and the Kabootar who paid no heed to her ja-ja-ja. The other beta is ACP Jay Balram Azad (John 3), a bachelor cop whose tight buns, dimples and imbecile jokes make him and us smile.

The principled politician is state home minister, but his anti-corruption bill is rejected. Suddenly a vigilante in a hoodie arrives. He gets off on killing bad people in ways that require such elaborate shopping, planning and coordination that each butchery episode would put the best event management companies to shame.

To take care of the mystery vigilante, ACP John is summoned with this incantation: “Toofan ko rokne ke like chattan chahiye hoti hai“.

Before we proceed, you must understand that John 2 and John 3 are ablaze with purpose, and their pursuit of jan-hit and insaaf is propelled by many things.
One is their dear mommy who is in coma. Then there’s the fact that apart from them, all politicians, doctors, businessmen, cops are bad and corrupt.

But the most powerful motivation is their daddy. Though dead, Dada Saheb Balram Azad’s expectations from his two beta-jis linger in his larger-than-life statue that is marching away from the Vidhan Sabha with a plough.

Again, I am certain it was the other way round, but this too kept me entertained as I imagined Sr John’s tail coiled under his sheer white dhoti along with all his scruples and sanskar.

Vigilante in hoodie recreates these tragic scenarios before making the bad men dead. But who is he? John 1, 2, 3…

Satyameva Jayate 2 toggles between being downright bigoted, dumb and quite chalu.

SJ2’s politics is identical to that of khap panchayats where patriarchal men with a primitive worldview and savage instincts settle scores with dead bodies.

Misogyny and fanaticism is a part of SJ2. It’s not overt. It’s just there, in its DNA. Casual, persistent, forever.

Overall the film’s IQ is very low, thus its bigotry is high-pitched and proud.
The film is so dumb, in fact, that though it wants to keep a secret — about who the big baddie is — it keeps dropping obvious filmy hints while pretending that a big climactic reveal is coming.

John Abraham can convincingly pick up a bike with the biker on it and fling it. When his angry fist lands on a long, oblong wooden table, it splits into two. But he can’t act.

At best he can freeze one of these two expressions — happy or sad, but every time he has to show anything complicated or in-between, he looks like he urgently needs to do potty.

That’s why all of John Abraham’s characters prey on his real-life persona. Dole-shole and ribbed abs.

So John must take off his shirt at least once and give us darshan.

There was a time when that was enough in a John Abraham movie. But now that he is 48 years old, his torso needs the assistance of a body double and CGI. No wonder his belly button, that we are made to stare at for a long time, holds a gloomy expression matching ours.