With a runtime of 161 minutes, the film is engaging and enjoyable but the film definitely tries to clear the image of Sanjay Dutt. 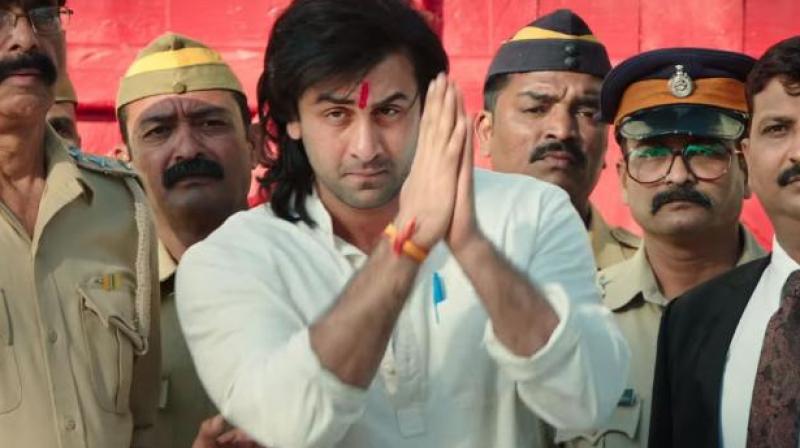 Ranbir Kapoor in a still from ‘Sanju.’
Rating:

The best thing about director Rajkumar Hirani is that no matter how intense is his story, his storytelling is so humorous that one can easily enjoy it. Since he tried his hand on a biopic for the first time in his career, he definitely takes his creative liberty in telling the real story of controversial star Sanjay Dutt played by immensely talented Ranbir Kapoor.

With a runtime of 161 minutes, the film is engaging and enjoyable but it definitely tries to clear the image of Sanjay Dutt. The movie starts with the Supreme Court’s verdict of 1993 Bombay blasts after which Sanjay and Maanayata seek help of an autobiographer Winnie Diaz played by Anushka Sharma.

The film takes you on a flashback to Sanjay Dutt’s grand acting debut in Rocky in 1981. Meanwhile, his mother and legendary actress Nargis Dutt is battling with the last stage of pancreatic cancer. She passes away three days before the release of Rocky. Zubin Mistry, a drug peddler, played by Jim Sarbh, introduces Sanju to drugs. Gradually, Sanjay becomes a drug addict and wants to quit it but all in vain. Sunil Dutt, played by Paresh Rawal, takes his son for rehab in America. On the other hand, Ruby (based on Tina Munim), Sanjay’s love interest, played by Sonam Kapoor, gets married with a businessman Rustom. Incidentally, Sanju meets Kamle aka Kamlesh played by Vicky Kaushal in New York and instantly becomes close friends with him. They bond over pub hopping and sexual conversations.

Later, Sanju runs away from the rehab but ends up coming back and after a year-and-half, he returns to Bombay fit and fine.

Second half is all about what happens with Sanju inside the Yerawada Jail, Pune. However, the scene where Ranbir goes nude at the security of the jail is hard-hitting and nicely shot. He makes friends with inmates in jail, hosts a radio show and indulges in other activities. This part of the film closely shows how much he suffered during his term and how his family gets affected. Hirani nicely ends the film on a happy note where he makes Sanju no less than a saint.

The director cleverly shows the role of the media in Sanju’s life. How badly his life has been publicised. There are certain portions in the film which intent to hammer on this. Media bashing is an important part of the film including the song featuring Ranbir and Sanjay Dutt himself in the end credits. It is perhaps Rajkumar Hirani’s weakest film, which is smartly backed up by some good humour, captivating dialogues by Abhijat Joshi and high dose of emotions. The film only revolves around guns and drugs, and if you are seeking more of Sanju’s life then you’ll be highly disappointed. His infamous relationships with his co-actresses, his lull phase at the movies, his marriage and Trishala (daughter from his first wife Richa Sharma), meeting with Maanayata have no mention in the film.

Biopics are meant to glorify but not to the extent of making it a pro-film. We agree Sanjay Dutt has humongous stardom, he is a great actor and a friend amongst industry, but the dark chapters in his life are equally a talking point.

Ranbir Kapoor is the finest of the lot. He is truly an incredible star of our generation. He portrays Sanjay Dutt with so much finesse and ease. His body language, tonality and dialogue delivery are perfect. Vicky Kaushal is the brightest amongst the entire supporting cast. In a few scenes, he even surpasses Ranbir’s act. He is definitely the future of our Hindi films. Paresh Rawal is good, Manisha Koirala looks pleasant. Dia Mirza is up to the mark. Jim Sarbh draws attention as an evil drug peddler who lisps. Anushka Sharma is okay but why does she have that English accent? Karishma Tanna is there just for the heck of it, any other girl could have spoken Gujarati language and worn a pink lingerie! Boman Irani has a short role but he is funny. Weakest of all is Sonam Kapoor. Her one-tone acting is cringeworthy.

In totality, Sanju can be your weekend pill of entertainment. Watch it for some really good performances. You might give some sympathy to the controversial star.