Apart from the stated political message in the story of two sisters, there is the normalisation of the cow. 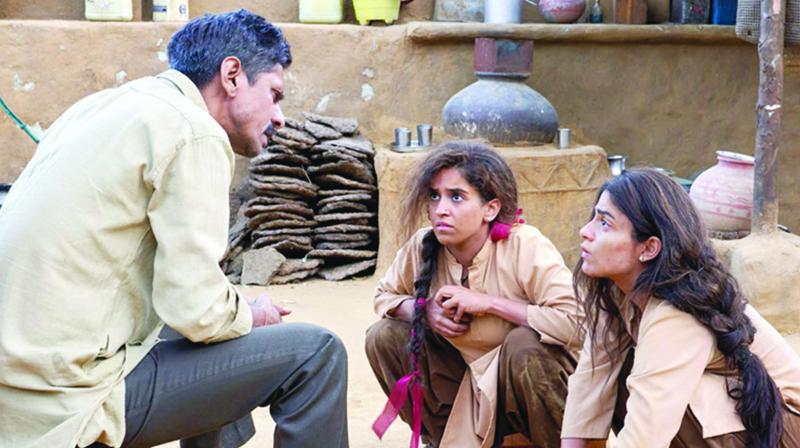 Still from the movie Pataakha
Rating:

A voiceover lovingly explains to us that these sweet nothings are being vomited out from the gut of two sisters who haaaaaaate each other.

Genda, also called Chutku (Sanya Malhotra), and Champa (Radhika Madan), often called Badko, the warring-since-bachpan sisters indulge in name-calling and pulling mental, twisted faces at each other not because this one did this, said that, or took that.

Their hate is existential, visceral. On their loathing for each other and their perpetual, unrelenting war rests their own sense of self.

It’s at one of their free-style kushti rounds that we realise the strangely cheerful voiceover is that of Dipper (Sunil Grover), the village’s Narad Muni. He devotes himself to getting Chutku and Badko lunge at each other’s throat and beats a drum, literally, when they are entwined around each other in a screeching rage.

Watching them slap each other, pull hair, kick, shove and abusing is his most favourite manoranjan.

Writer-director Vishal Bhardwaj has taken Charan Singh Pathik’s delicious short story, Do Behnein, and turned it into a delightful movie that has a peppy, folksy punch.

His movie has a show-offy, fun gait, a spring in its step, like that of a spunky village teenager who ventures out wearing new, vilayati gifts. But because it’s a film by Vishal Bhardwaj, the story of two sisters also holds an allegorical allure for him and those of us who wonder why India-Pakistan can’t calm down and just be.

While there’s much resonance of that relationship in his film, there’s also a brief, but very preachy, corny line at the end that should have been taken out.

Bapu earns a decent living from a stone quarry. He also adores his daughters and keeps trying to stop them from killing each other. Every time he intervenes, trying to broker truce, he gets thrashed rather indiscriminately.

After one such public fight, the toss of a pebble decides what they will do — keep going to school or stay at home and take care of ghar-grihasti.

Chutku weeps at the outcome because she dreams of becoming a teacher, while Badko cheers because she wants to open a doodh ki dairy.

But there’s trouble with Bapu’s work. To stay in business he has to give ghoos that he can’t afford. After his loan gets rejected, he’s off for a week to seek his brother’s help. In the few days that he is gone, both Badko and Chutku, in their bid to outdo each other, acquire boyfriends and fall madly in love.

Bapu returns nirash and has only one choice left — marry one of his daughters to Patel (Saanand Verma), the tharki junior engineer who is a much older randwa (widower). Which sister marries him again a decision decided by the toss of a stone.

But, somehow, life takes such weirdly hysterical twists that there is no getting away for Chutku and Badko from ek doosre ki manhoos shakal.

For a while, in the beginning, Pataakha is shot by cinematographer Ranjan Palit like films are captured for children. The camera, from below, zooms into a screaming character, enlarging them and making them loom. The scary grotesqueness of faces, with their tedha-meda mouths and bulging eyes, jumps up like it does in those pop-up fairytale books, forever staying embedded in our minds.

Bhardwaj’s background score, that is often in the foreground in the film’s first half, adds hectic, urgent pace to the proceedings, and it’s instructive.

The film’s rather loud music goes oink, boing, and it tumbles, cheers and laughs, not just grabbing and drawing our attention to the screen, but also telling us that it’s all too much fun.

It is, but the music does try to amp it up a few notches, needlessly so.

But Bhardwaj’s direction and writing are superlative. The film’s screenplay is very karara, mazedaar, the dialogue are superb and all the performances are excellent, though Sanya Malhotra, Radhika Madan, Vijay Raaz and Sunil Grover tower over the others.

And because it’s a Bhardwaj film, there are also some random political asides.

Apart from the stated political message in the story of two sisters, there is the normalisation of the cow. And often, in between scenes, there’s a brief burst of political commentary, as if Bhardwaj filled a few balloons with politics and simply aimed them at his script. They splatter the screen and make you laugh out loud.

But more than that, what makes Pataakha crackle are its dialogue which fly about like warring, angrily buzzing drones.

Apart from the rally of “karamjali”, “naas peeti” and other such delightful abuses, there are gems like, “Aankhen jaise Roadways ki khad-kharati bus, aur shakal jaise aspatal ka aapat-kaleen vibhag”. A special place will forever be reserved for Pataakha’s dialogue.

The long-winding ones are handed to Sunil Grover and Vijay Raaz. While Raaz’s Bapu is always using them to ground the sisters, and film, Grover’s Dipper uses his lines to uproot it and organise fisticuffs. Though both the actors are given to overacting, here they are reigned in and add a special sparkle to the film.

Sanya Malhotra and Radhika Madan, who are continually spitting hate at each other in a coarse, mohalle-ki-ladaaki mode, make Pataakha a riveting watch.

They are both truly excellent. Sanya has that bitchy sharpness to her performance which reminded me of Ratna Pathak, if she were on speed, and Radhika Madan transcends her sweet, soft looks to take the avatar of a scary, angry chudail in a way that’s making me want to go to the theatre and watch the film again.

I had a smile pasted on my face for the entirety of Pataakha. And I want to smile again while savouring the delights of fighting sisters once again.