Sanju movie review: Ranbir is outstanding in this dishonest film

Watch Sanju. Because encased in this dishonest, blah film is one of the best performances ever on the Indian screen. 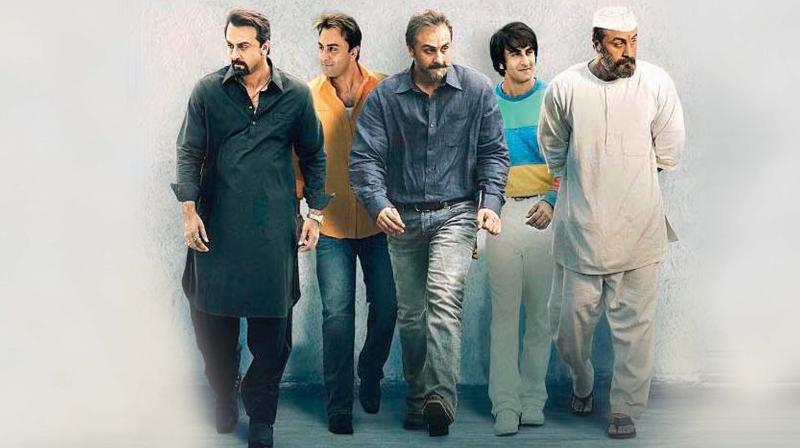 Still from the movie ‘Sanju.’
Rating:

It’s kind of silly to expect Bollywood to make a film on one of its own that speaks the whole truth. So no one was really expecting Rajkumar Hirani, a director who only makes genial movies that feel like soul-cleansing holy baths, to direct a film that interrogates its subject. Especially not since the subject in this case has been the star of two of his much loved films.

Munna Bhai MBBS (2003) and Lage Raho Munna Bhai (2007) gave Sanjay Dutt a new lease of life, Hirani a seal of excellence, and the country a cool way to protest.

There’s nothing wrong in being in love with your subject. But to be so blinded as to ditch several exciting anecdotes that hold great dramatic, cinematic potential in the pursuit of concocting a character with shades of just bright whites is pathetic and not expected of a director of Hirani’s calibre and standing.

Sanju, the film that Hirani has co-written (with Abhijat Joshi) and directed, should have been titled Sanju Baba Muah, with a cute pink heart at the end that pulses with uncontrollable love and blows out red kisses.

Hirani and Joshi twist and edit the life story of Sanjay Dutt the star and member of Bollywood royalty, forgetting that most of it has played out in the glare of the public eye. That’s not just deeply dishonest, but also very idiotic.

As Hirani and Joshi cherrypick a few episodes, ones where the blame for transgressions and misdemeanours can be pinned on Dutt’s demons or the media, the police, others’ malevolence, the state, and of course the media again, they miss the opportunity to explore the complexes and impulses that clearly controlled Dutt at one point.

Instead of the interior complexity of a troubled, struggling, entitled man, we get a victim of circumstances with a mildly entertaining tapori streak and a heart of gold.

It’s as if Hirani and producer Vidhu Vinod Chopra felt they had not done enough to redeem him, and owed Dutt some sort of debt.

Sanju repays that debt, in kind. Which is truly tragic because Ranbir Kapoor is absolutely outstanding and was all primed and ready to delve deeper, to go beyond the mannerisms and high jinks.

The role, which begins when Dutt was 21 years old and ends in his late 50s, demands various transformations — physical, hairstyles, clothes.

Kapoor undergoes each change not just superficially, but also alters his body language and eyes to mark a new phase, a new problem, and his eyes, that began quite vacant and stupid, start to speak to us gently.

It’s almost as if we are watching Sanjay Dutt in real life. Except that we are not. We are watching Hirani’s one-dimensional version of Bollywood’s big bad boy, despite Kapoor’s best efforts to add edges, frailties, fears to him.

Sanju takes off on a tacky note. We are at his house and are concerned with someone who has written his biography which draws parallels between Bapu aur Baba — both went to jail, both believed in non-violence yet one carried a lathi while the other had an AK-56.

Sanju is losing his patience but wife Manyata (Dia Mirza) rolls her eyes, calls Sanju the “king of bad choices” and suggests that they persuade the great biographer Winnie (Anushka Sharma) to write his biography.

This carries the suggestion that Sanju was made at the behest of Manyata and Dutt to close the chapter of jail terms and court cases once and for all. To have their say, the last word.

So Winnie then is a composite of Hirani and Joshi. But, Winnie is not so sure and still mulling over the offer when she’s ambushed by one slimy character with a lisp. Zubin Mistry (Jim Sarbh), a real estate developer, asks her not to write the book.

Winnie is now intrigued enough to start interviewing people and that makes up the two big episodes that make up Sanju’s plot.

The story of drug addiction in film’s first-half is told by Sanju himself, while his friend Kamlesh Kanhaiyalal Kapasi (Vicky Kaushal), Kamli for short, tells the story of the case linked to Mumbai bomb blasts.

Shooting for his first film, Rocky, Sanju is struggling to act, to live up to his father Sunil Dutt’s (Paresh Rawal) expectations. His mother Nargis (Manisha Koirala), meanwhile, has been diagnosed with cancer.

Frustrated, unsure of himself, bristling under what he perceives is his father’s disapproval, and buckling under the weight of his parents’ heavy legacy, he doesn’t blink once when a man offers him some white lines to snort. It lifts him, makes his forget stuff. But then his demons and problems grow bigger.

Sanju loses the girl he loves, carries cocaine when he flies to America to see his mother. And though he finds a friend for life in Kamli, he loses his mother, has a breakdown at the premier of his film, is put into rehab, runs away from it, and then returns to it carrying a cassette his mother had left for him.

There is little interrogation of his stupidities, lack of impulse control, of his philandering that would have filled out the character and made the trajectory of this wayward son interesting. All we get are a few mild transgressions that entertain us a bit.

Most characters are ignored, including his sisters, who hang around wide-eyed, and we don’t get to see his affairs, fights, the troubled marriage with Richa Sharma, the court battle for custody, his relationship with his daughter.

When Sanju does speak of the number of women he has slept with, it’s under the chhatra chhaya of a rather maternal Manyata’s mangal sutra and sindoor, all three testifying to the fact that their husband is now a changed man.

The second story begins with riots that followed Babri Masjid’s demolition. There are some threat calls to the “adha Musalman” about killing his father and raping his sisters, so he decides to get some automatic assault rifles for protection.

Mumbai blasts, arrest, confession, jail. So careful it is not to pin the responsibility for any of his actions on him, that we hear nothing of Dutt’s links with the underworld, meeting Dawood. And when he sleeps with the girl his best friend loves, the girl is blamed, not him.

The film doesn’t even show the father’s anger nor the Congressman’s frustration at having to seek the help of Bal Thackeray for his son. All we get from him is a resigned exhalation as if he failed his Sanju “puttar”.

While Hirani’s film tips its hat to his own contribution to changing Dutt’s identity from a “terrorist” to “Munna Bhai”, Khalnayak just gets a poster.

But in jail it shows us shit rising in the Indian commode and flooding Sanju’s cell. It’s a dramatic scene that makes us queasy, and presents him as a bechara boy-man who could never get over his mother’s death, the disappointment he was to his father, the bad choices he made in weak moments and had now suffered enough.

Rajkumar Hirani is a very skilled director and story teller who creates powerful scenes that move us and make us weep. But he’s also a very sanskari, moral director.

That’s why usually, after watching his films, I get this clean, good feeling.

But today, after watching Sanju, I felt like I had been cheated, lied to.

Apart from two-three powerful moments in Sanju, like one where Senior Dutt saab asks his son to sing along with him, the film’s story is sparse and gave me ample time to think of all dramatic incidents in Sanjay Dutt’s life that have been left out.

The more I think of Ranbir Kapoor, and how he has put his heart and soul into the role, how his performance breathes life into and lifts this otherwise dull and dishonest film, the angrier I get.

I wonder what Hirani was scared of. That we would suddenly start hating this Bollywood bad boy? Lol.

Vicky Kaushal, who plays a composite of many of Dutt’s friends, is good, and Dia Mirza surprisingly creates a smug, self-satisfied Manyata who is very difficult to like.

Paresh Rawal is not Sunil Dutt. And can’t be.

Yes, despite the strange wig and air of sanctimony and self-importance that envelops him, he, together with Kapoor, creates the film’s few moments that’ll make you weep.

Watch Sanju. Because encased in this dishonest, blah film is one of the best performances ever on the Indian screen.