An opera worth many shows

A musical opera based on the immortal love of two legendary characters. 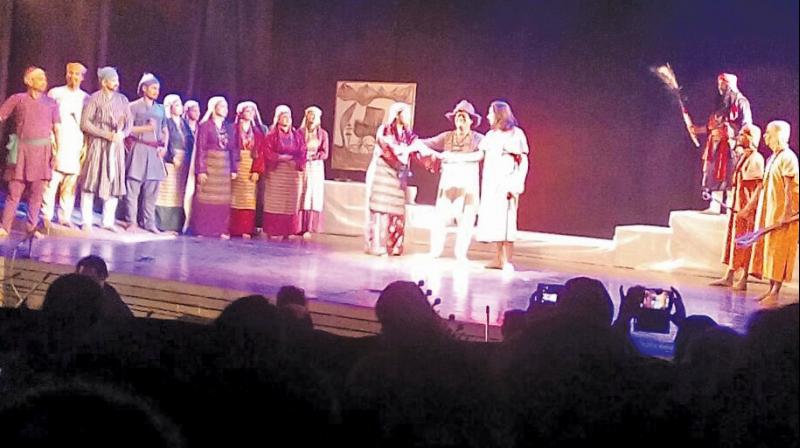 Rajula Malushahi is a famous legend and opera from Kumaun which is a love story between Rajula and Malushahi.  Rajula is the daughter of a rich trader, Sunpati Shauka from Shaukyana, and Malushahi is the king of Bairath. Rajula becomes fascinated by Malushahi and his kingdom when her mother narrates stories about Bairath.

Rajula is able to convince her father to take her with him on his trading trip to Bairath. She sees Malushahi in a dream and gets mesmerised. On their trip she sees various magical and awe-inspiring visions emanating from the folk world of Uttarakhand like Siduwa Biduwa, the legendary singing minstrels of the hills and fairies and various landmark places of the Northern Himalayas.

Rajula confesses to her father that she is meeting Malushahi and that she wants to marry him. This makes Shauka very angry as he had already committed his daughter’s hand to a boy from the Hun Kingdom.

Rajula somehow manages to escape Shaukyana to go and visit Malushahi. On the way she faces many difficulties, including the attention of lecherous men. When she finally reaches Malushahi’s palace, he is delighted to see her and plans to announce her as chief queen to the kingdom the next day.

At this point, Rajula feels even if she is given this title, some may still question her honour. She decides to go back to her kingdom and dares Malushahi to come to Shaukyana.

Malushahi visits Shaukyana disguised as a mendicant. When Shauka gets to know about this, he is enraged and poisons Malushahi’s drink. Malushahi dies but Mirtu Garhwali revives him from death. In the end, Rajula and Malushahi are together again, proving that the power of love is stronger than that of honour and status.

This is an excellent revival of Rajula Malushahi, an opera the likes of which one has rarely seen or heard and is worth many more shows.