An offering to the Guru

The name Samarpan is an acknowledgement to the masters of the six-member band. 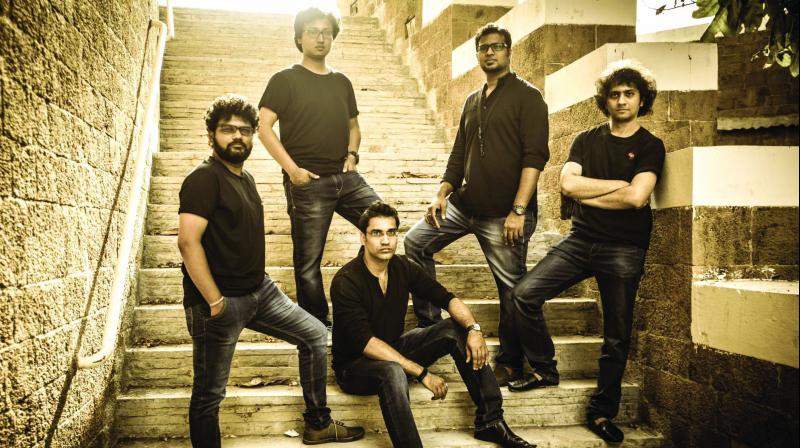 A blend of Hindustani classical music with a “little Jazz and Carnatic music” is the way tabla player Ojas Adhiya depicts the music of his band Samarpan. The band has recently performed in Delhi in a concert and it has been quite evident that the gathering of people regardless of their age acknowledges the well-composed pieces by Adhiya and his band. “We thought of doing something different, but keeping Indian music in mind. It had to be music with an Indian soul, just improvised upon,” Adhiya said.

It’s is a musical offering by youthful artists who have come together and emerge as a band with an intention of showing musical solidarity to the traditionally rich Indian classical music and western Jazz. As the name suggests, it is an attempt to musically surrender to the great musical ethos & create every moment musically joyful. It is music of genuine passion and ardor. They have been performing at Festivals & Global Exchange Programmes all across the Globe.

Guided by various music stalwarts, the six folks - Ojas Adhiya (tabla), Ninad Mulaokar (woodwind), Manas Kumar (violin), Vishal Dhumal (console), I.D. Rao (saxophone) and Gautam Sharma (percussion) – have performed with their Gurus (masters) before meeting each another. As an offering to what they learnt all these years is what the band is named after — Samarpan or an offering.

“We thought of doing something different, but keeping Indian music in mind. It had to be music with an Indian soul, just improvised upon," said Adhiya, after a successful Delhi show.

Appreciated as a miraculous child, Adhiya (presently 30), amazed his family as a two-year-old by playing the instrument with no prior preparation.

Later on, he began training under Guru Mridangraj and gave his first open execution at the age of four. In 1993, he entered Limca Book of Records as the country’s youngest tabla player. His father, Dr Yogesh Adhiya, detected the child’s distinct fascination for percussion at a youthful age of two during Siddha Yoga Guru Swami Muktananda and Gurumayi Chidvilasananda’s recitation and reflection focus. Ojas was sent under the consideration of music maestros Shri Kalyanji-Anandji. Kalyanji is known to have guided Ojas to a family friend Mridangraj to learn traditional niceties of table playing including accompaniments. Ojas turned into the Gandaa Bandh Shaagird (disciple) of Shri Mridangraj.

Woodwind player Ninad, on the other hand, is a skilled craftsman and is a very young talent. He has won numerous shrubs. He won the SURMANI by Sursingar Samsad, Pandit Pulaskar grant and came first in All India Radio Classical Music Competition, ‘A’ grade. By and by he is gaining from Anand Kashikar and Vijay Sardeshmukh from Mumbai. Ninad has two solo collections. He has been performing with Ustad Rashid Khan, Hariharan , Pankaj Udhas, Bhupendra Mitali Singh, Talat Aziz among others.
Violinist Manas Kumar, who has done M.Music from Lucknow, received 'A' grade from All India Radio, SURMANI by Sur Singar Samsad, Pandit V.D. Paluskar grant, and got the government’s senior grant from the service of culture, among others. Presently he is learning from Pandit Bidyut Misra. Manas has two solo collections under his name. He has also performed with Pankaj Udhas, Bhupedra Mitali Singh, Talat Aziz among others.

Console player Vishal got his first task as a music director at the age of 19 for a collection, sung by Suresh Wadekar, Sonu Nigam, Devki Pandit and others. He has been performing with the best performers with a traditional combination of widely acclaimed percussionists like Trilok Gurtu, Sivamani, Taufiq Qureshi, Fazal Qureshi, Selva Ganesh, Ustad Rashid Khan, Late Jagjit Singh ji, Pankaj Udhas, Ghulam Ali, Hariharan, Anup Jalota, Bhupendra Mitali Singh and numerous others.

Saxophone player I.D. Rao is an adaptable performer. At a young age he has mastered the art of playing Saxophone and can play in Carnatic, Hindustani and Western classical music.

Percussion player, Gautam Sharma is a devotee of a legendry percussion maestro Ustad Taufiq Quereshi. He has been helping him and playing with his band MUMBAI STAMP at different celebrations and occasions across the nation.

He has additionally performed with Ranjit Barot , and numerous others.

On Samarpan's execution at the HCL shows at the India Habitat Center, Adhiya said every single piece that the band performed were their own, in view of Indian 'ragas' with a bit of Jazz.

HCL has been organising Concerts for over 20 years, dedicated to identifying, evolving and promoting talent rooted in the glorious heritage of Indian classical performing arts.

Over the years, HCL Concerts has evolved into a unique platform for the exceptionally talented veterans as well as upcoming artists – be it dancers, vocalists or instrumentalists.