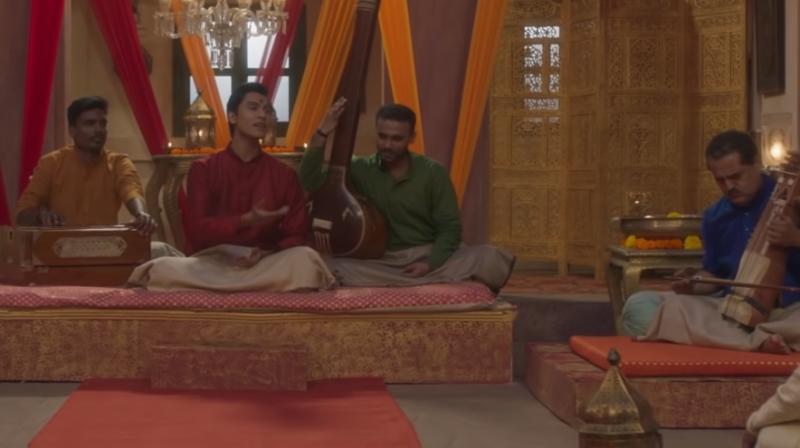 Parikh says he had to work harder at teaching music etiquette to the lead pair of Bandish Bandits.

It is not every day that we get to see the beauty of Indian classical music taking over cinematic expression the way it has in Anand Tiwari’s Bandish Bandits.

The web-series brings almost forgotten sangeet gharanas to the fore through the efforts of noted actors like Naseeruddin Shah, Atul Kulkarni and Sheeba Chaddha. And the person behind their finessed depiction of classical singers, Akshat Parikh, is over the moon about the appreciation the series has garnered.

A trained classical musician, Parikh schooled under his late grandfather, vocalist Pt. Krishnakant Parikh Ahmedabad, belonging to Mewati Gharana of the late Pandit Jasraj. So coming from a classical background rich in guru-shishya parampara and having dabbled in commercial singing, this series resonated with the 30-year-old singer.

“It was a blissful experience working with an extremely talented cast and crew. Maybe a little intimidating at first, but they made sure everyone was at ease. The beautiful amalgamation of Indian classical and pop music was something I could relate to,” says the singer.

The most exciting part of Parikh’s job as a Music Supervisor for the show was teaching veteran actor Naseeruddin Shah the nuances of classical singing, making his role of Sangeet Samrat Rathod authentic and believable.

He suggested that Shah make his portrayal of a Guru distinct from his persona as a Sangeet Samrat performing on stage, and the veteran actor accepted the suggestion wholeheartedly, Parikh says.

“Naseer Sir made a genuine effort to learn any and every idea that went into the making of a bandish. He wanted to know what it meant, the feel of it, and everything beyond. He made sure that he got every nuance right,” he shares.

Atul Kulkarni, the singer reveals, is a quick learner. “Coming from an artistic Marathi household, he picked up on the nuances that you see in a classical singer in an instant,” Parikh says, adding, “It was absolutely humbling working with both of them. They showed extraordinary dedication and worked really hard at learning and understanding Indian classical music.”

Parikh says he had to work harder at teaching music etiquette to the lead pair of Bandish Bandits—Shreya Chaudhary and Ritwik Bhowmik. With Shreya, the training needed was basic, as her character didn’t have a classical background.

“With Rithwik, I worked for almost two-three months, as he was the lead and had the maximum number of scenes where his character sings. I started with the basics, as his was a make or break character for the show. We started from things as trivial as hand movements, and sargams, and included secondary things like taals and musical notations,” says Parikh praising the actor for putting in hard work.

While it takes years to master a craft, to act as a classical singer in a show dedicated to music can go either way. As a Music Supervisor Parikh paid utmost attention to detail.

“I wanted to make sure that it looked the actors were actually singing. The popping of veins in the throat would make it look much more realistic. Lip syncing to classical music and its sargams is a different forte all together. As much as lip-syncing and expressions matter, so do an actor’s facial enunciations of the classical notations, or Uukars and Aakars, as we call them,” he reveals.

In fact, Parikh’s participation was not limited to writing or training the cast, he also played a cameo role in the web-series.

For Parikh, who has a background in teaching and singing jingles, this project was both invigorating and stressful. “It is absolutely great to see a series being made on Indian Classical music; it is something so different from everything that is there on OTT platforms these days. I hope we did right by the music and it conveyed the emotions that it was meant to,” he says.

Ask him if the charm of classical music is fading, and he is quick to deny it. He believes that Indian classical music is very much around. The proof, he says, is in the numerous messages he’s been receiving from young people after watching the series.

“So many young people are watching and liking the series; it proves that classical music still has charisma. I’ve been receiving texts from people sharing personal experiences, wanting to learn classical music, or wanting to pick up from where they left off. Classical music may have evolved over the years but it has surely not got effaced,” he argues.

Parikh wishes that more commercial projects are done on the subject of classical music, in order to reach out to audiences. “OTT serves audiences of any and every age-group. There will surely be more series now, with the focus on music and songs. Shows like these, where we embrace Indian culture, not just musically, even otherwise, need to be made,” he concludes.