Entertainment   Music  03 Jul 2017  Taking Carnatic music to the North, and beyond
Entertainment, Music

Taking Carnatic music to the North, and beyond

Flautist Shashank Subramanyam, who was a child prodigy in Carnatic music, is now taking lessons from Hindustani maestro Pandit Jasraj. 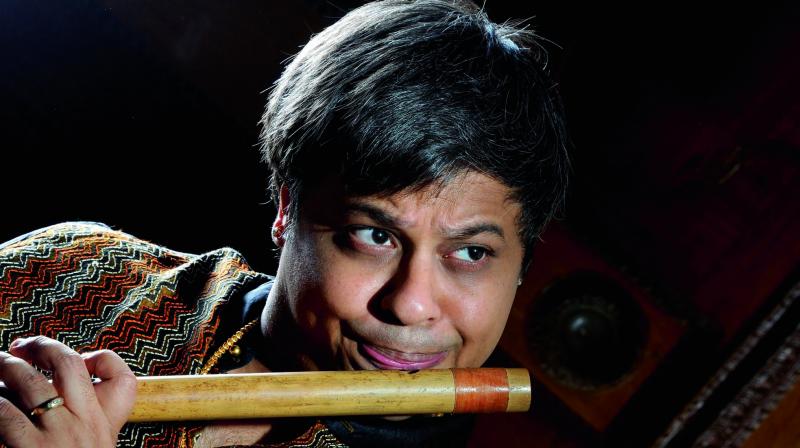 Shashank Subramanyam has many firsts to his name. A child prodigy in the true sense of the term, Shashank gave his first concert at the age of six. He has been a concert performer since 1984, for more than 32 years despite being so young (he is not yet 40). He also remains perhaps the youngest artist ever, at the age of 14, to be an

A-Grade artist on All India Radio and Doordarshan. He has also received a Grammy nomination in 2009 for his album along with John Mclaughlin.

Born into a family of non-musicians, though his father was an amateur flautist, Shashank says his “family were vedic scholars traditionally, from Southern Tamil Nadu”. His guru, Palghat K.V. Narayan Swami, trained him on the flute. Much later, his own interest in North Indian classical music took him to Pundit Jasraj, from whom he has been learning since 2003. “I have always been a fan of North Indian Hindustani music, and I first met Pundit Jasraj when I performed at his father’s festival in Hyderabad in 1993. I remained in touch with him since then and started learning from 2003 onwards,” Shashank said.

On being asked why he chose to learn from Pundit Jasraj, a vocalist and not an instrumentalist, Shashank replied, “Our instrumental music in the Carnatic style follows the voice much more than in the North Indian music system. (The North Indian system) has a more highly-developed instrumental technique. The beauty of North Indian music is that each instrument has its own style of playing, its own distinctive compositions. In South India, those instruments that follow the voice better, like the violin or the flute, have been more successful.”

Yet, his flute playing is distinctive for the innovative techniques he uses. On being asked the differences between Hindustani and Carnatic concerts, Shashank replied, “Carnatic music concerts can be prolonged also, but can be compressed in a shorter format, fitting all aspects in a smaller time frame. Any experienced performer can do that of course, but in the Carnatic style it’s much more usual. Treatment of ragas is similiar in both systems, just the format of presentation different.”

When asked about the importance of his Grammy nomination, Shashank  replied, “It doesn’t really matter as a performer, but in the eyes of organisers and the audience it matters, and career-wise it has meant a lot for me. Unfortunately, many 50-plus musicians are junior to me in the field. Awards are a shot in the arm, no doubt, but the love from your audience is more important. In artist selection, for an organiser, or for the press, awards mean a lot, but for an artist, there are of course no shortcuts to being a concert musician. You have to be perfect every day you perform regardless of what awards you get.”

On being asked about the Padma awards, Shashank shrugged and said, “I feel awards given by the Indian government are given after a certain age; they should be based on seniority in the field and excellence as a performer. Awards motivate, no doubt, but they should be given at a time when they endorse your artistry, not when you are so old that you can no longer contribute in your field. I have been 32 years in the field, yet was offered a Sangeet Natak Akademi Yuva Award, which is offered to upcoming artists. Yes, I am 39-years-old, so in that sense I fit in (the Yuva awards are awarded to excellent performers below the age of 40), but I have been performing for so many years. Sometimes success gets delayed, but it’s never denied.”

A fun-loving person, with more than just music to his credit, Shashank says, “I love watching films. But, during my years of training in music, I did not go to see movies in the theatres. I think the first time was when I was over 20. Even today, I am not so fond of going to the theatre, I catch up on movies during my many long flights. I love regional cinema Tamil films, Bollywood”.

He also loves travelling, which he used to do a lot on trains in his earlier days. As he puts it, “Trains are an integral, inseparable part of our lives, as even now, at least in South India, the only convenient way to connect to the interiors is through trains. And especially prior to 2000, trains were really relevant to connect one all over the country. Flying is relatively a new phenomenon. In my case, when we artists travelled together by train in the good season — when it was neither too hot or too cold — to even distant places like Kolkata, and Delhi from the South, we enjoyed ourselves a lot. In fact, we used to have a ball!” Now, of course, travel is more by air.

“I would love to go back to Europe, anywhere in Europe, anytime,” he says. His wish has come true —  currently, Shashank is in Ravenna, Italy, performing at the celebrated Darbar festival.