Music for the soul

This Bengaluru-based singer is on a mission to excel both at college and her career in music. 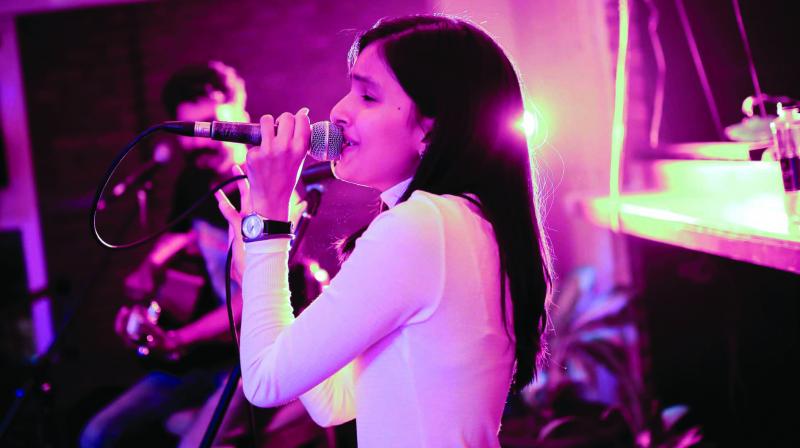 At the age of eight, we wanted to become pilots, doctors, engineers, beauticians (for the bold ones) and so one. By the time we got to 10th grade the blurry path begins to get clearer and we divide our passions, hobbies and careers. But, this 21 year-old exceptionally talented singer  Vandita Narayan from Bengaluru has managed to achieve big with her love for music and has also excelled in academics. After making several thought provoking songs and performing over 50 shows in a year, this teen superstar is all set to release her new song in the first week of December. We caught up with her and here’s what she had to say.

Vandita recently featured with the rapper Aditya Parashar (AVP)  in a promo song called Bhinna Sharapanjara for the Kannada movie Bhinna. Speaking about the inception of her singing career Vandita says, “I started by making one minute cover videos on Instagram (@vanditanarayan) which caught a crowd. Then I decided to attend open mic sessions which gave me the confidence to sing on stage. I learnt many aspects of live performances, and the right way to present myself and make a favourable impression on the viewing public.”

Giving us a sneak peak into her new single Vandita seemed very excited, she says, “My single is called Lonely Blues. The music is produced  by John and directed by Prakyath Narayan. It talks about how we look for ways to be happy, and create new boundaries in our lives. The song exemplifies the realisation that happiness is within us.”

Having gained this magnitude of exposure in this young age here’s how she manages school and her singing career, she says, “I’ve been actively participating in cultural activities from school. It all comes down to giving equal attention for both studies and music, and prioritising them at the right time, thereby, creating a balance.” Speaking about how she feels to have worked with renowned artistes she adds, “It feels very exciting and positively overwhelming. I’ve stayed up before work trying to understand the fact that I am actually doing this. I’ve learnt the importance of patience and attention to detail, to be humble no matter where you go or what you become. I’m still on the learning curve.”

Her recent single  – Period Song was created to spread awareness about the problems faced by a woman when it’s the time of the month, and talk about how we could replace sanitary napkins with cups or tampons.

Vandita whose interests lies in the Pop and Rock genres says, “I’ve been a huge fan of artistes like Lana Del Rey, Lady Gaga, Halsey, bands like Green Day, Linkin Park and so on. I do believe in talking about civic issues in my music, although I would like to avoid anything negative.”

When asked about her future plans she kept it simple saying, “I intend to explore the field of art and expand my boundaries. I want to dedicate myself to music, art and drama. I’m taking up theatre classes once I’m done with my engineering!”