Engaging with these immensely talented and articulate musicians makes one realise how in tune they are with each other. 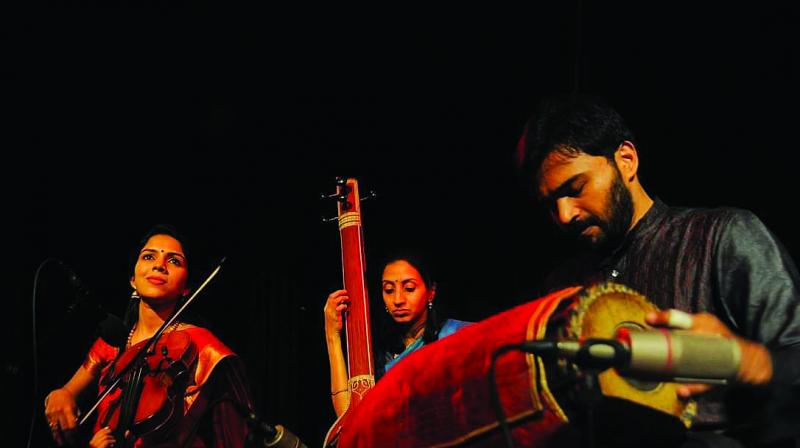 Recently in town, the musical couple, Anantha Krishnan and Charumathi Raghuraman get candid on their chemistry, music and their off-stage personalities.

Anantha R Krishnan has an impressive musical pedigree, but today he is making waves primarily as Ustad Zakir Hussain’s amazing mridangam disciple, who accompanies him in concerts. His wife Charumathi Raghuraman is a remarkable violinist of the Carnatic tradition and both her solo and accompanyist concerts are equally lauded. It was interesting catching both the busy artists in Delhi, before their concert at the India Habitat Centre.

Speaking about their musical beginnings, Charumathi said, “I was born in Bombay and started playing the violin from a very young age. When I was eight, I started learning from my Guru Vidwan T.N. Krishnan. I used to shuttle between Bombay and Madras. When I was about 11 years old, my mother and I moved to Madras and I had my first concert accompanying my Guru when I was just 11!” However, Anantha’s upbringing was totally different. “Though I was born in Chennai, we moved to the US when I was five. I moved back to Chennai after my grandfather (Vidwan Palghat Raghu) passed away,” he recalled. Clearly, born to the mantle he bears, the handsome bearded artist is modest about his achievements.

I asked them how they met. Anantha replied, “Music brought us together. We met at a concert where I was playing and she was a part of the organisers.” Charumathi said, “It’s great to discuss music with Anantha... we practice together, and of course play concerts together too. In a way, our concerts keep us apart, as we travel so much separately. But it’s okay. We have learnt to adjust and in fact value the time we spend together. The ‘spark’ remains strong!” Anantha chipped in, “I would say we make it a point to know each other’s concert schedules and plan to be together whenever we can.” Charumathi added, “When we are abroad after one of us has finished the concert tour, sometimes we meet up there.” Recalling one such rendezvous, Anantha shared, “Recently we met up in Europe. We were both travelling separately, and then had a few days together in Santorini.”

Continuing on his reflections, Anantha said, “What’s nice is that today we don’t connect only over music. There are many things we have in common and many things we are completely different on. I love Spaghetti Westerns, as they are called. Movies like Fistful of Dollars, The Big Gundown. I love the music of director Ennio Morricone.” Charumathi laughed, “ And I love light ‘feel-good’ films.”

I asked Charumathi how difficult it is being an accompanyist when she is such a proficient soloist as well. She said, “As an accompanyist, the challenge is to showcase my music best within the five-six minutes time of my solo.” On the topic of her inspirations, she said, “Mostly, obviously I am inspired by my Guru T.N. Krishnan Sir. He belongs to a family of musicians who were exposed to North Indian classical music too. I am inspired by Dr Rajam too and admire M.S. Gopalkrishnan ji, Lalgudi ji too.”

Drifting on to some lighter topics, I asked Charumathi to reveal some of her habits. “I love hearing ghazals. I don’t read as much as I should, there seems to be too little time and honestly, I don’t really have the habit. I love chaat, I can live on chaat, and some of my friends even call me ‘Chaatmathi’!!! I like Italian food and am quite a good cook,” she laughed. Anantha simply provided that he “loves reading.”

Engaging with these immensely talented and articulate musicians makes one realise how in tune they are with each other.