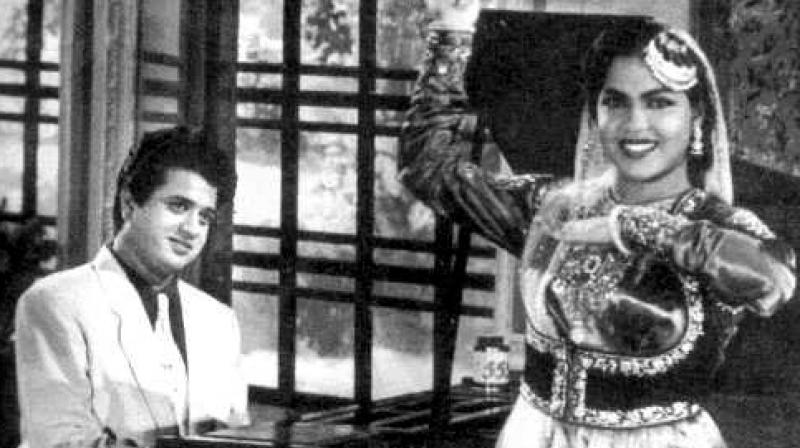 That's Jaikishen of Shankar-Jaikishen fame on the piano and Shakila doing a number in the film Begunah, which was banned for plagiarism.

PUNE: The National Film Archive of India (NFAI) has found a reel of a banned 1957 Kishore Kumar starrer Begunah, more than 60 years after the Mumbai High Court ordered all prints of the film to be destroyed.

"People have been searching for the reel for many years. It is a miracle of a discovery," NFAI director Prakash Magdum told PTI.

The film, which released in 1957, got mired in controversy with Paramount Pictures America alleging it was a copy of their 1954 movie Knock on Wood. It won the rights and the Mumbai High Court ordered all prints of the film to be destroyed.

All the prints were thought to have been destroyed after the court order but Magdum believes a few travelled elsewhere and survived. "We obtained the reels from cinema lovers within India," he added.

He said fans of the music composer duo Shankar-Jaikishan had been looking for the footage for a long time as it is the only film to feature Jaikishan in a major appearance.

"We have two 16 mm reels of Kishore Kumar's film Begunah in two phases consisting of around 60 to 70 minutes. One reel came two months back and another came last week. The second one has the song 'Ae Pyase Dil Bezubaan'. It features Jaikishan on the piano and actor Shakila dancing. The song is sung by Mukesh," Magdum said.

The condition of the reel is not so good but the song is "runnable".

"The entire footage is of 60 to 70 minutes, the primary inspection says it is not in a very good condition but this particular song is there. But it is runnable, I could see it. The film starts abruptly but it does have a proper ending. There are no credits," he said.

The archive is now trying to get a copy of the judgement from the court but it has been difficult so far.

"They said until we share details like the date of judgement and the court in which the case was heard, it will be difficult for them to search. We tried to check the database of various judgements through our lawyer friends but they couldn't trace this particular judgement. There are a few news items in magazines about it," he said.