Hyd-based band The Malcolm Project has come up with an Urdu track, Moutjza, blending rock music with Carnatic fusion 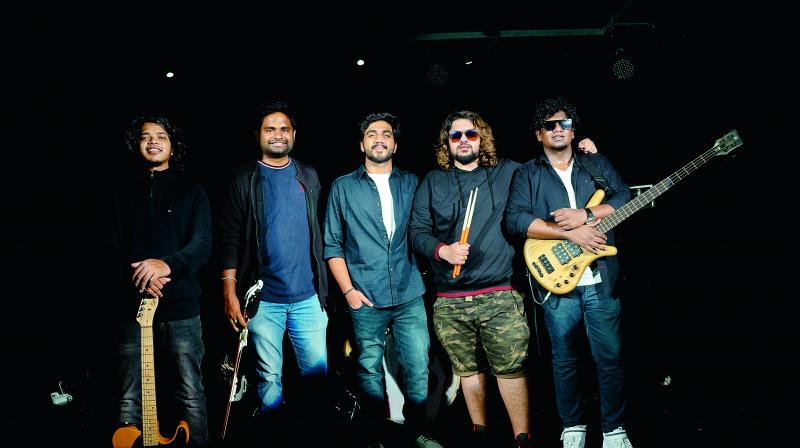 We might have heard Rap and Hip Hop tracks in Urdu so far, but perhaps for the first time in India, Hyderabad-based band The Malcolm Project has come up with an EP in Urdu, titled Moutjza (‘Miracle’) blending rock music with Carnatic fusion.

“The idea to come up with an independent rock fusion came to us in May during the lockdown, and hence, the entire track was virtually transmitted on video calls,” explains Melvin Malcolm, composer of the song.

“Nobody has done this so far in India, so I thought this would be a unique initiative. I believe that fusion and rock music, if blended with desi lyrics, can get a global makeover. Moreover, I like to experiment with music in the fusion and rock genre and give it an international appeal,” shares Malcolm, who also produced the track. He believes the Urdu lyrics fit naturally into the music.

The song was mixed and mastered by sound engineer Adhiraj Singh in Toronto (Canada). “In a blended genre song like Moutjza, mixing and mastering are the most significant things that please the ear. Since I wanted the song to be on a global scale, I went for a world-class sound engineer,” explains the 30-year-old Melvin.

Interestingly, Melvin’s father (Mohan C.) was also a musician. “He was the composer of the famous song, Mayadari Maisamma,” reveals Melvin, who also plays bass guitar.

Apart from Melvin, the guitarist Joshua, vocalist Sri Charan, and Aaron Wesley, the drummer, also contributed to the track. “Getting the tunes right through video calls was something I did for the first time,” explains Joshua, who adds that it took a week for him to finalise the song structure.

“Moreover, shooting the video during lookdown was weird, of course, with all the safety measures in place. We shot the video in Jubilee Hills (Hyderabad), but interestingly, we shot the video individually and then compiled and blended each one’s part. It took us around 12 hours to wrap up the song,” explains Joshua.

For Sri Charan, the most challenging aspect of singing the number was to stress every word in the lyrics.

“Melvin and I spent several sleepless nights trying to understand the meaning of the Urdu lyrics so that I could pronounce the words correctly and express them with feeling,” explains Sri Charan, who is thrilled that the song, which has just been released on YouTube, is getting great traction.