The legacy of the sarod

In the capital, the baton of a musical tradition is passed on to the next generation in spellbinding fashion. 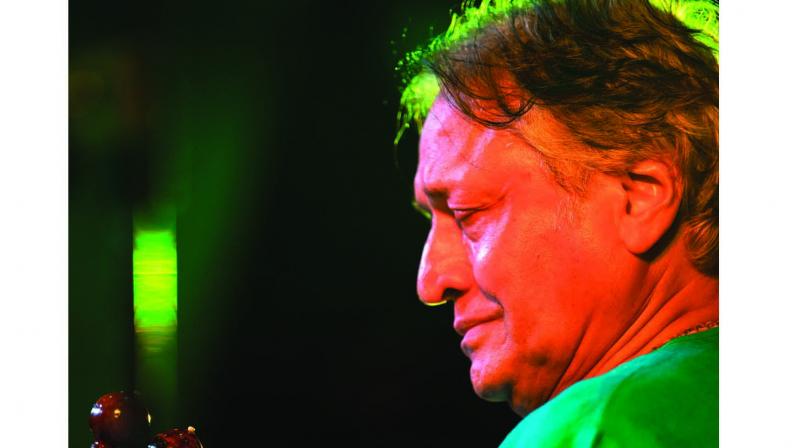 To witness the journey of a musical tradition from one generation to another is nothing short of magical. Pt Ranajit Roy Chowdhury of Calcutta learned the sarod from Ustad Hafiz Ali Khan. His son, Biswajit Roy Chowdhury, enamoured by the instrument, relocated to Delhi to learn from the Guru’s son Ustad Amjad Ali Khan. He lived in his Guru’s house as a student and learned the instrument. This was some 50 years ago.

Keeping the silsila (sequence) of teaching alive, Pt Biswajit Roy Chowdhury recently
presented four of his disciples at the Shriram Bharatiya Kala Kendra to his Guru, Ustad Amjad Ali Khan. All the instrumentalists presented compositions created by Ustad Amjad Ali Khan himself, from a period of the late 1960s
to 1980s.

Young Saranya Chatterji, a rare lady disciple on the sarod, played Raga Aiman. Surajoy Dutta from Agartala has only been learning from Pt Biswajit Roy Chowdhury for seven months, but, as Ustad Amjad Ali Khan later said, “It’s a difficult raga on the sarod to master”. Akash Anand, the Bihar-based eldest disciple had been learning sarod in Delhi for several years. There was a presentation by Satyakam Mohkamsing on the violin, who is a student under the ICCR training program.

The four enterprising disciples pleased Ustad Amjad Ali Khan, to the extent that he graciously offered to render the same compositions and inspire the students to absorb every nuance fully. The next day, an interactive training session with the maestro turned into a performance! The artist was in his element, playing the same five ragas the disciples had played — Raga Shri, Aiman, Bhupali, Kamod, and Kalawati. It was touching at one point to hear the master ask Biswajit, seated reverentially on the floor in front of him, “Mein bhul gaya, kya tha woh gat” (I forgot what I had made, what was that composition?) and the ready reply from the disciple. Between sharing memories and talking about the music, the maestro played the grand music he has so painstakingly created over the years. Indeed, the sheer profusion of his compositions is breathtaking; and astonishingly, the bulk of these was made during his 20s and 30s.

The Ustad relayed an important message — our musical tradition is primarily carried forward through compositions that embody the spirit of the raga. But nowadays, young musicians don’t give compositions the importance they deserve. In concerts, greater emphasis is laid on improvisation, and sometimes the composition is not even played completely. This is a negative trend and can lead to distortions of the Raga, as Ustad Amjad Ali Khan explains. Another note of caution was the duration of a concert. He said, “One should not be repetitive, as this is how the classical tradition is disrespected. Never bore your audience; play with a sense of balance and proportion.” No handbook on our classical music tradition exists on how long a presentation should be; it is left to the artist to decide this. “I wish there was a manual stating how long each raga should be rendered”, longs the Ustad.

It was a wonderful afternoon that the eager students would treasure for days to come.