The search goes on

From scripting lyrics to jamming sessions, aswekeepsearching, the Ahmedabad-based Indie band has some novel ways of working it out. 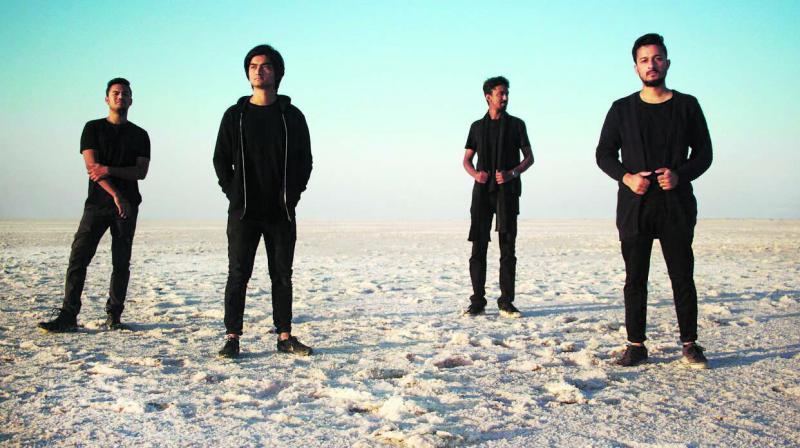 The four-member band takes inspiration from all the travels they do to perform, to pen down the lyrics.

Just when the indie scene in India is thriving and breaking all myths, aswekeepsearching, the post-rock band from Ahmedabad, has launched their second album, Zia, after a successful first one. Talking about the band’s music, Uddipan Sarmah, the lead vocalist and lyricist of the band, formed in 2013 says, “Our music falls into the niche category of a unique mix of soft instrumental music with underground, topped with Hindi lyrics.”

The four-member band takes inspiration from all the travels they do to perform, to pen down the lyrics. Just like the unique approach they have for their music, how they collaborate too is also unique. “We don’t stay in the same city. So, we work mostly online and sometimes, we gather for practice in Pune, as two of our members stay there,” says Uddipan. Sharing about their latest body of work, he adds, “The creation of Zia took about four to five months as we had to work on and off due to the distance,” he says. Shubham Gurung, guitarist/keyboardist, bassist Bob Alex and drummer Gautam Deb, who along with Uddipan, have been performing since 2015, the year of the launch of aswekeepsearching’s first full-length release titled Khwaab. The eleven-track album sees the use of instruments like the violin, viola, cello, sitar and the tabla, into collaboration with like-minded artists on some tracks.

The band has performed at notable music festivals, some of which include all three editions of the NH7 Weekender 2016, Ctrl Alt Del, Into the Void, Indie March, and many more. They have also shared stage with the likes of Steven Wilson, 65daysofstatic, Tides from Nebula, Blackstratblues, and Karsh Kale; I am waiting for you last summer. “The most engaging experience was the launch tour of our first album, Khwaab. Right after the album came out under the Russian record Label, Flowers Blossom in the Space, we went on a five-city tour in Russia, performing in venues like the St. Petersburg Opera House and the Red Concert Hall in Moscow,” Uddipan shares.