NY's Philharmonic is back, pandemic-style - playing in the streets

The famed symphony orchestra is playing outdoor pop-up shows, getting creative during the pandemic that has kept concert halls closed 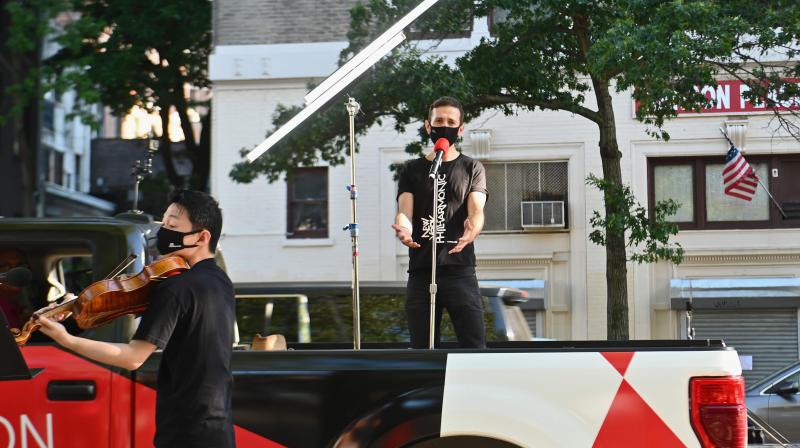 Countertenor/producer Anthony Roth Constanzo (C) and and violist Cong Wu of the New York Philharmonic play with the 'bandwagon's pop-up concert series' at Betty Carter Park on September 04, 2020, in the Brooklyn Borough of New York City. - Its fall season has been cancelled and its concert hall closed indefinitely, so New York's Philharmonic is taking it to the streets. One of America's oldest musical institutions, the famed symphony orchestra is playing outdoor pop-up shows, getting creative during the coronavirus pandemic that has kept concert halls closed and New Yorkers starved for live music. (AFP)

New York: Its fall season has been cancelled and its concert hall closed indefinitely, so New York's Philharmonic is taking it to the streets.

One of America's oldest musical institutions, the famed symphony orchestra is playing outdoor pop-up shows, getting creative during the coronavirus pandemic that has kept concert halls closed and New Yorkers starved for live music.

Each weekend, small ensembles play at surprise locations throughout the city, wearing T-shirts and masks in front of a pickup truck dubbed the "bandwagon."

Sometimes musicians get rained on or people just walk on by -- but sometimes a nearby delivery truck honks along in exactly the right key.

In those moments, says opera singer and series producer Anthony Roth Costanzo, "it feels like the city is our orchestra and we're the soloists."

"In this moment of pandemic, in this moment of social change, we're exploring new ways together... to connect to people and to realize that we have to reinvent the concert-going ritual," the countertenor told AFP after performing a set in Brooklyn's Betty Carter Park, a small leafy urban oasis above a subway track.

"It's not just about bringing people into our house. It's about getting our house out in the world, and sharing what music can do."

On a balmy Friday evening, Roth Costanzo and a string duet -- Quan Ge on violin and Cong Wu on viola -- drew a socially distanced crowd to their show that began with Mozart's Allegro in G Major and wrapped with the classic New York ballad "Somewhere" from "West Side Story."

Unlike at its traditional classical music concerts, the Philharmonic encourages its pop-up audiences to dance, applaud and interact between songs.

Roth Costanzo played the role of MC, speaking to the crowd between each song from the bed of the pickup, at one point giving a shoutout to the vendor selling sheets and towels next to the makeshift stage.

Drivers slowed to roll down their windows and pedestrians took cell phone videos, as dozens of audience members -- including children and dogs -- stopped to take in the tunes that featured a string arrangement of Alicia Keys' "Empire State of Mind."

"I love you!" applauded one onlooker, Lorri, whose eyes welled with tears as Roth Costanzo finished a moving rendition of the somber "Lachrimae Pavane."

Like many musicians, members of the Philharmonic took their shows online when the spread of Covid-19 shut their doors in March.

And while virtual concerts offered a stop-gap solution, they are simply "not the same," said Cong.

"Music is about communication," he said. "We need the stage."

Outdoors, he continued, "it's nice to feel the energy from people -- we play, we share the energy, and we have energy back from the audience."

The Philharmonic isn't publicly announcing when and where each concert will occur, to avoid large crowds from amassing.

The organization is planning three performances a day on Fridays, Saturdays and Sundays into at least mid-October, aiming to eventually cover all five city boroughs.

In each audience is the co-president of the League of Women Voters, who acts as a groupie of sorts, following the performers and helping those gathering to register to vote.

After Friday evening's mini concert wrapped at the park, where Brooklyn's Academy of Music towers across the street, Roth Costanzo called it "gratifying" to be back out performing live.

"There was a moment at the end when the violins finished playing, and there was a perfect stillness, silence like you'd have in a concert hall," he said. "I can feel people connecting -- it's not just me to them and them to me -- it's them to each other as well."

"That's so important in our world right now."