Entertainment   Music  08 Apr 2020  'He is and will always be with me'
Entertainment, Music

'He is and will always be with me' 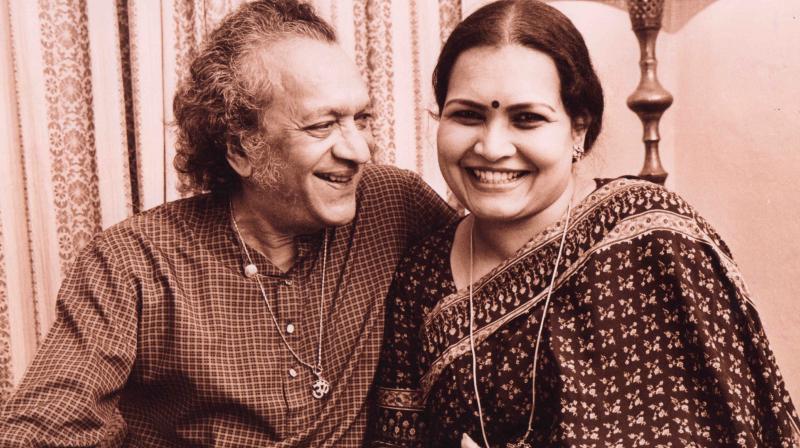 This year marks the birth centenary of the 'godfather of world music' Pandit Ravi Shankar, who was instrumental in putting Hindustani classical music on the world map.

Born into a family immersed in arts, Shankar found his calling in the sitar that he studied under Ustad Alauddin Khan becoming a masterful prodigious sitarist.

Shankar became the newly Independent India’s cultural ambassador playing in Moscow and New York, thus starting his journey as a composer for Satyajit Ray’s Apu Trilogy and as the music director of All India Radio.

Taking his musical prowess further, the Bharat Ratna awardee, while merging with violinist Yehudi Menuhin and Beatles’ lead guitarist George Harrison influenced the popularisation of Indian instruments in pop music during the 60s.

In a career spanning over nine decades, Shankar was the first Indian musician to become a household name in the West with concerts at the Monterey Pop Festival, Woodstock, and the Concert for Bangladesh that won him numerous Grammy awards.

A composer, educator, guru, performer, and maestro Shankar who composed music till his last breath was to be celebrated all throughout 2020 with a series of Ravi Shankar Centennial Concerts by his disciples in India and across the US. However, the concerts stand postponed in the wake of the COVID-19 pandemic.

Today, his wife Sukanya Shankar continues to maintain his musical legacy through Ravi Shankar Institute for Performing Arts. Currently in the US with her daughter Anoushka Shankar and her sons, Sukanya is staying safely indoors.

“We have no choice but to stay home and be safe for our sake and for the sake of others,” says Sukanya. Not someone to be disheartened with the sudden change in circumstances, she firmly believes that there’s a reason for everything in life

“We had so much planned; there was a two-day festival organised in Delhi by Raviji's disciple Arun Bharatram. But since the grand celebrations can’t happen, this gives us a chance to celebrate privately with family. I always believe something good comes out of everything in life,” smiles Sukanya who was recently in India to open an exhibition in honour of her late husband at the Indian Music Experience in Bengaluru. She adds that she is delighted with the display.

The Centennial Concert besides featuring Philip Glass, Dhani Harrison (son of George Harrison) and Nitin Sawhney, would for the first time bring together sisters, Norah Jones, and Anoushka Shankar, performing on stage. Sukanya reveals the idea came about naturally from the girls.

“They have, of course, worked on a few recordings together, but both of them performing live together would have been a wonderful thing. I have, of course, seen a lot of them both fooling about at home but was so excited to see them together on stage,” she laughs.

While the creator of numerous ragas - Tilak Shyam, Nat Bhairav and Bairagi, to name a few - went on to build cultural bridges, at home surrounded by his loved ones Shankar was humorous and loving.

For Sukanya, the maestro was the perfect husband, lover, and friend. Despite their 34-year age gap, the two loved each other dearly and her face lights up whenever she talks about him.

“The age gap did not matter at all. I am very blessed. I still hear his voice every day as always; every day he would tell me, ‘Have I told you today? I love you more than yesterday and less than tomorrow’,” she gushes, adding that as a teacher, he was a judicious mix of strict and joyous. “He was a mix of both, he made learning really interesting. Performing and teaching were his passion and he enjoyed it most,” she adds.

As for her journey from Sukanya Ranjan to Sukanya Shankar, reveals that despite barriers and a long wait love took over everything and things feel in place.

“It was a long journey to become his consort and companion. We spoke different languages and English was the only common one. We had different ways, but love overcame everything. He is with me and will always be with me guiding me,” she smiles.

And even though the years of ups and downs in their relationship, Shankar always remained Sukanya’s center of life. “Everything in life is temporary and will change. Getting agitated is not going to help anyone. Also, I had this precious being to take care of,” she concludes.