Members of the music band RAAG are venturing into Indian films. The musicians share their secret of success. 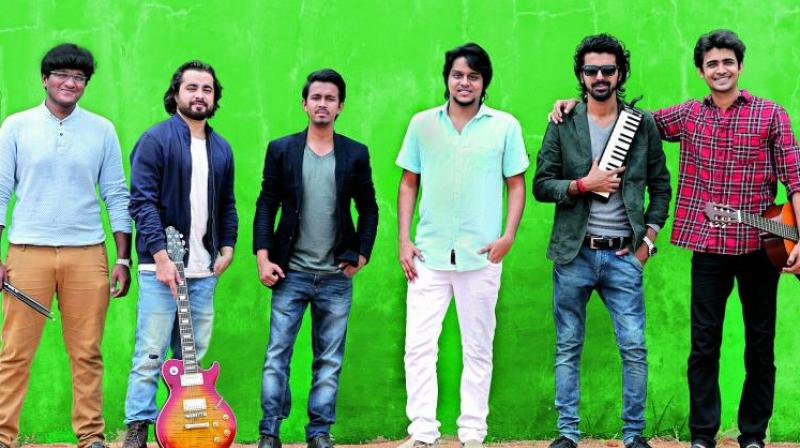 Making a big film entry this year, the artists are rocking the music industry.

What started off as a fun jam session at a friend’s house became a change-making career for the six young musicians of the band — RAAG. Pratap, Soorya and Lakhan Khanna met at A.R. Rahman’s KM Conservatory of Music and started doing small live concerts in Chennai. When their planned rendezvous with drummer Karthik Vamsi, keyboardist Jax Jay and acoustic guitarist Rudra Dixit worked out, RAAG was born.

Having performed in various cities in the last three years, the musicians found it difficult to establish themselves at first, but have performed about 250 concerts so far, pan India. “Now we have our own studio to record and practice. There were times when neighbours complained about the loud music while practicing at our house during late evenings.” shares the percussionist Karthik.

Making a big film entry this year, the artists are rocking the music industry. Pratap, the lead vocalist, has already lent voice to Oscar winner Rahman in movies like Jab Tak Hai Jaan, Ranjhanaa and a couple of Tamil films. He has also participated in many Rahman concerts globally. Singing in many upcoming films this year, Pratap expresses his respect for ARR, saying, “Working under him was magical. He always makes the singers comfortable while recording!”

The keyboardist and music composer, keyboardist Soorya, who has been associated with Rahman in the UN General Assembly, also worked for a few south Indian films and has worked with the likes of Javed Ali, Antony Daasan, Keba Jeremiah and Sooraj Santhosh from Masala Coffee.

RAAG is also well known for the many cover songs of famous hit numbers with their own twists. “We started making cover songs on YouTube first. They then became popular and were telecast on MTV and other south Indian channels. We are also very excited about our upcoming Bollywood single, Befirkar”, reveals Lakhan, the lead guitarist. Aiming high, the band also hopes to go on a world music tour next. “We loved the response that we got in Nepal for the Valentine’s Day special concert this February. That encouraged us to organise concerts globally and it is definitely in the pipeline,” says Pratap.

Stating that performing as a band is so much more fun that going solo, Lakhan says, “We have a great bond. Although all of us have our own commitments and works, we meet almost every day and work together to take our band and what we have to the next level.”