Homage to a Guru

Dagar’s student Professor Rinku Lamba made her debut on stage with Raga Kamboj, which was appreciated by all. 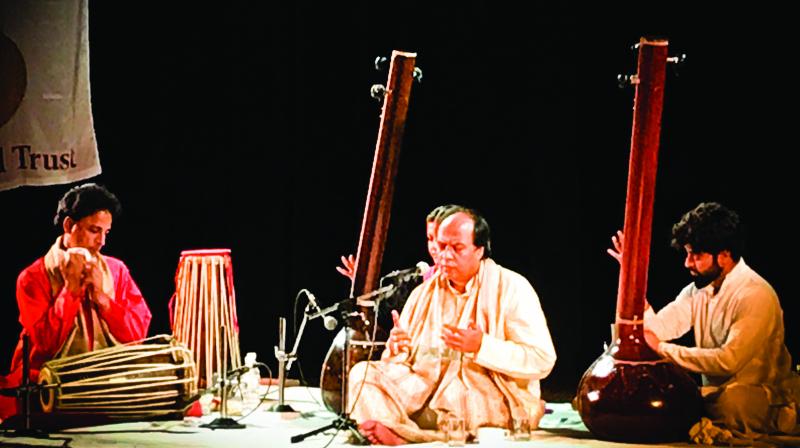 Remembering Ustad Nasir Zahiruddin Dagar on his 25th death anniversary, through a movie was simply mesmerizing as his voice came alive with the softness of alaaps. Every breath has music, moulding softly with its surroundings. One can only feel that experience beautifully captured in a movie by Virendra Jain.

His nephew and shishya Padma Shri Ustad Faiyaz Wasifuddin Dagar recalls how he would call him Bama in short for Babar mama after the late ustad’s pet name Babar.

“Bamaji is a favourite of all of us. The middle part of the onion is very tasty but to reach there one has to peel it part by part. In music, Bama would offer us something that would be like the center of an onion. Then he would instruct us to peel through and reach there. That was the whole essence of our practice,” Dagar recalls, adding, “This is how he would teach. He would never instruct us not to do this or that. Whatever was missing was perceived by us. We had to devote our time.

He was like a lion, knowing well how to command. Whenever I would perform I would never look at his eyes directly. I would just follow his his finger tips.”

Dagar himself made a performance of a lifetime starting with a powerful redition with Raga Jaijaiwanti, followed by what he called a true homage to his guru with a bandish – man ka pir — soulfully personifying the sadness of his great loss, leaving the audience in tears.

It was a truly guru-shishya ensemble.

Dagar’s student Professor Rinku Lamba made her debut on stage with Raga Kamboj, which was appreciated by all. This professor from JNU in political science gave a full-throated performance before a huge gathering, flaunting the lineage of Dagarvani style.