Let’s appreciate the difference between noise and music

The nadaswaram is a fascinating instrument. 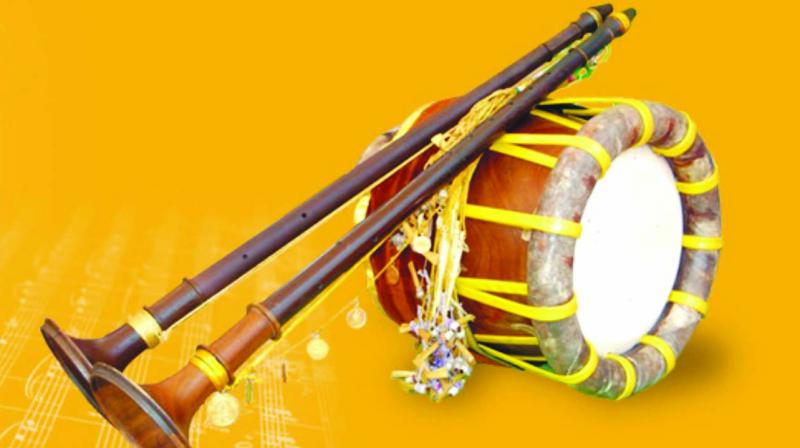 The music of nature is without parallel and I have often written about it.

A fellow musician shared a picture of the following hoarding — “Live Nadaswaram not allowed”. It is displayed in a street in the heart of Chennai.

When you enter temples in South India, or even weddings and other auspicious events, the sound of the nadaswaram envelops the entire atmosphere. How do you define the nadam or the musical sound of this grand instrument? Grandiose, awe-inspiring, rooted.

I have grown up watching and listening to the nadaswaram, it signified many things — temple rituals, celebrations, concerts. I would remain perplexed as a child, watching with wonder how the pipe brought out such deep, august sound. How the nadaswaram artiste’s cheeks would puff up with air and how the wind would travel into the pipe and come out in the form of beautiful music! This visual appeal was priceless. I would also admire the mobility of the nadaswaram artistes, as they led the temple processions, along with their tavil counterparts, who, their instrument hung around the neck, were the very epitome of grace and confidence.

The nadaswaram is a fascinating instrument. Its richness of sound is without compare, and it seems to be made for Carnatic music, revelling in its gamakas, its inflections, with the nuances embedded in this music. It is an old adage in Carnatic music circles that the voice must imitate the inflections of the nadaswaram. So fine were the nuances of the instrument that singers craved to emulate them.

I live with noise all day long. So do many other Indians. Televisions with anchors and participants all screeching one over the other, compete with ear-piercing film music on loudspeakers and heart-stopping beats well beyond the no-noise hour. Vehicles honk in frenzy in all the mayhem. When we celebrate festivals, we need loudspeakers to convince ourselves of our collective religious fervour. And often force our gods to listen to frivolous numbers with pedestrian lyrics. The entire neighbourhood needs to tremble and that is the sign that we are celebrating. In larger events, noise even has the sanction of public sentiment. That is the way modern India portrays itself vis-à-vis celebration.

Now, coming to the above-mentioned board, the obvious question that arises is “but why”?

Various interpretations and deductions can be proposed. Noise for the neighbours? Perhaps a school or a hospital around? I see several schools and hospitals sanctioned in places where they ought not to be and functioning in dismal conditions. Going by such a yardstick, there are a lot of things that need to go and with immediate effect. I will reserve my opinion on this particular board of ban and the conditions that govern it. It perhaps might have been well justified for several reasons. Leaving the unknown variables apart, I found the board in itself a bit saddening.

Traditional music has taken a beating. True, the volume of the tavil drum that accompanies live nadaswaram can be enormous for small spaces. But, there could have been negotiations on this. However, a board is a law and it sends home a point. Why do we not put up boards saying “drums not allowed on this street”, “loudspeakers banned here”, “only silent Ganpati immersions permitted here”, “no neta victory marches here with music”.

I would love to put up a thousand such boards around the city where I live, where most do not realise the difference between noise, silence and intrusion or have sadly resigned themselves to the irreversible fate of living with it.

The late Kishori Amonkar leaves behind indelible music and many precious thoughts. She repeatedly advocated the primacy of the musical sound, the swara, vast expanse that inhabits it and which the musician must appropriate. Such intimacy requires a profound communion with music like the one Amonkar enjoyed.

One can achieve such an affinity in spaces that enchant, sounds that speak even in silence. I find such vital spaces in the heart of nature. The music of nature is without parallel and I have often written about it.

Recently, one such wonderful experience was rudely snipped by the repulsive phenomenon called “rain dance”, a form of urban celebration usually in non-urban surroundings. It shattered the remarkable silence and enchanting sounds of nature. It was disruptive. I wish nature could put up its own ban. And if that were to happen, the loud, noisy, unaesthetic would be banished in one sweep. Then only the primal sound would prevail.

How blissful would the world be!

Dr Vasumath Badrinathan is an eminent Carnatic vocalist based in Mumbai. She can be contacted on vasu@vasumathi.net