The band also appreciates the aim of 4x4 Entertainment to encourage local music as they get to perform in a club space. 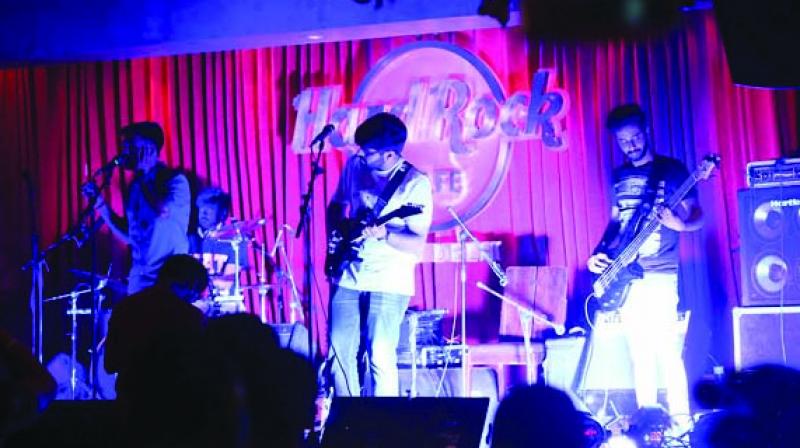 For many of us, our tryst with Sant Kabir was restricted to mugging up his dohas and its meanings in Class 6 or 7. But for Neeraj Arya’s Kabir Café, Kabir is a rockstar. Giving Kabir’s poem a musical twist — with renditions in jazz, rock, reggae and folk fusion — the band aims to explore the writings of the poet-saint. The band is a venture where Neeraj (lead vocals and rhythm guitars), Mukund Ramaswamy (violin), Raman Iyer (mandolin), Viren Solanki (percussions) and Poubuanpou Britto KC (bass guitar) strive to present the poetry of Kabir in a musically interesting fashion that instantly connects with the audience. On a Hard Rock tour this month, the band performed at Hard Rock Café, Delhi, in association with 4x4 Entertainment, which has launched “HRC Local” to celebrate the beauty and diversity of homegrown music across the country.

Taking a leap from doing stage shows by collaborating with Hard Rock Café,  Iyer says that the aim is to bring Kabir to a place that is not easily associated with such kind of music. “The audience was amazing, we got lot of love and respect from Delhiites. While some of them knew about us others were completely surprised about the manner in which we performed the songs,” says Iyer.

For the gig, the band also collaborated with Pramod Kumar on guitar and Rahul Ram on percussion and dholak.

It took Arya seven years to do research and understand the verses of Kabir. He started giving solo performances all over the country, and then others joined him. “It was an organic process… none of us wanted to pursue music but gradually it all came together. Moreover, Kabir has done his own branding but people get curious about what the experience of poetry and rock combined would be,” explains Iyer.

To pioneer the genre of “Kabir rock”, the band continuously seeks guidance of renowned Kabir folk singer Padma Shri Prahlad Tipaniya and artist Shabnam Virmani. “We have a database which we constantly refer to... we try to understand the song and work on the melody and rhythm,” says Iyer.

All five members come together to select the songs to be performed at a particular event. The brainstorming session includes trying various versions, fusing melodies and rhythms. “We thrive on collective energy and while we perform there is no scope for improvisation. However, we do change the sequence of songs depending on the audience... At Hard Rock it was a wonderful experience to see people connect with our music,” says Iyer.

Jay Singh, co-founder and executive director at JSM Corporation said, “Hard Rock Cafe is all about spreading the joy of music among music lovers! We have always believed that India has the most diversified and richest musical heritage in the world. We are looking forward to music lovers from all over the country coming to the shows to express their love and fondness for our Indian roots.”

The band also appreciates the aim of 4x4 Entertainment to encourage local music as they get to perform in a club space. Justifying the decision to bring in Neeraj Arya’s Kabir Cafe, Himanshu Vaswani of 4x4 Entertainment says: “The independent music scene has changed its mask every decade since the ’70s. From the jazz clubs that crowded the South Bombay streets to the black T-shirts that lined up outside Rang Bhavan. The onset of this decade has brought about the freshest and the most original change to the landscape of independent music in the country. Numerous artists have chosen their mother tongue to express themselves thereby making their music far more accessible to the masses. With HRC Local we want to enable their purpose and spread their message one gig and one tour at a time. From Tamil rap to Bengali electronica, we have got it all on the cards.”

Excited at the prospect of performing all across the country, the band aims to “stay together, explore Kabir and keep performing”. With the mission of spreading the teachings of Kabir, Kabir Cafe sings on Zara Halke Gaadi Haanko/Mere Ram Gadiwal/Zara Dheere Dheere Gaadi Haanko/Mere Ram Gadiwal. But my favourite would remain Jhini re jhini re jhini chadariya/ke Ram naam ras bhini chadariya/ashta kamal dal charkha doley, panch tatva, gun tini chadariya. (This is fine, this is fine cloth/it is been dipped in the name of the Lord/the spinning wheel, like an eight-petal lotus, spins,/with five tatvas and three gunas as the pattern.)